The Best is Yet to Come: The 2019 NSLS-II/CFN Users' Meeting 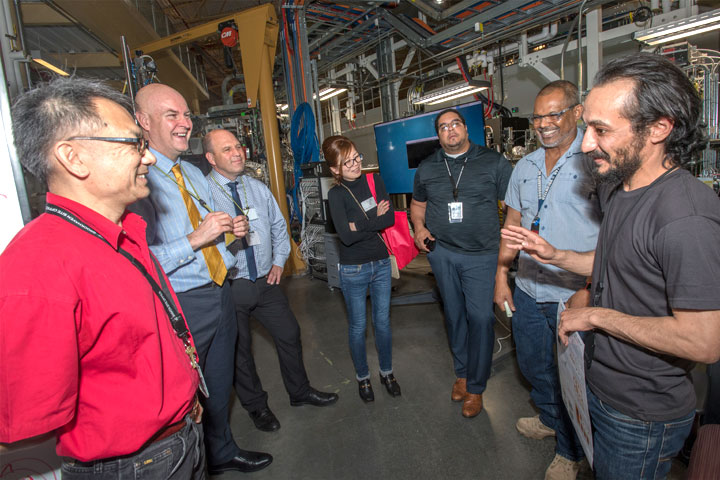 Among other tour stops the NSLS-II/CFN Users' Meeting attendees visited the Electron Spectro-Microscopy (ESM) beamline and learned more about its spectroscopic and microscopic capabilities for materials science.

From May 20-22, 408 attendees from across the world gathered over three warm spring days at the U.S. Department of Energy’s (DOE) Brookhaven National Laboratory to celebrate the ongoing success—and very bright future—of the National Synchrotron Light Source II (NSLS-II) and the Center for Functional Nanomaterials (CFN), two DOE Office of Science User Facilities at Brookhaven.

The meeting included 10 workshops, held in various buildings across the Lab campus, and two plenary sessions that took place on Tuesday and Wednesday mornings.

At 9 a.m. on Tuesday, in Brookhaven’s Berkner Hall, Lab Director Doon Gibbs took the stage to

welcome attendees. He provided a positive outlook on the future of NSLS-II and CFN, described an “encouraging” budget environment, and went through a few of the planned infrastructure improvements to Brookhaven Lab, including an extension to the Long Island Rail Road that will make getting to the Lab much easier.

“This will be a game changer,” he said.

Next up was NSLS-II Director John Hill, who reiterated the mission of NSLS-II: “to deliver world-class capabilities and a world-class user experience.”

“We are building toward this vision,” he said.

Hill went through some of the facility’s key numbers: 1,500 projected users this year, reliability at a solid 97.4 percent, and beam current steady at 400 milliamps (mA) with studies being done at 475 mA. There are 28 beamlines now operating.

NSLS-II’s state-of-the-art capabilities are bringing in more than 700 proposals each triannual cycle. Among those are the Hard X-Ray Nanoprobe (HXN) beamline, which currently offers the best spatial resolution available—12 nanometers—and it is continuously improving. The Soft Inelastic X-ray Scattering (SIX) beamline recently achieved a record energy resolution of less than 22 millielectronvolts (meV) at 1000 eV. Upcoming beamlines, such as the High Energy Engineering X-Ray Scattering (HEX) beamline that is designed to advance energy storage and conversion research, will no doubt increase the number of proposals. Three more beamlines are planned to fill in gaps in capabilities at NSLS-II; they are part of a new project known as NSLS-II Experimental Tools II (NEXT-II). To accommodate more users, new ways of getting beamtime have been developed, including Block Allocation Groups (BAGs), which allow sets of very similar experiments to come in under a single proposal, and “multimodal” proposals, which allow users to request several beamlines in a single proposal. 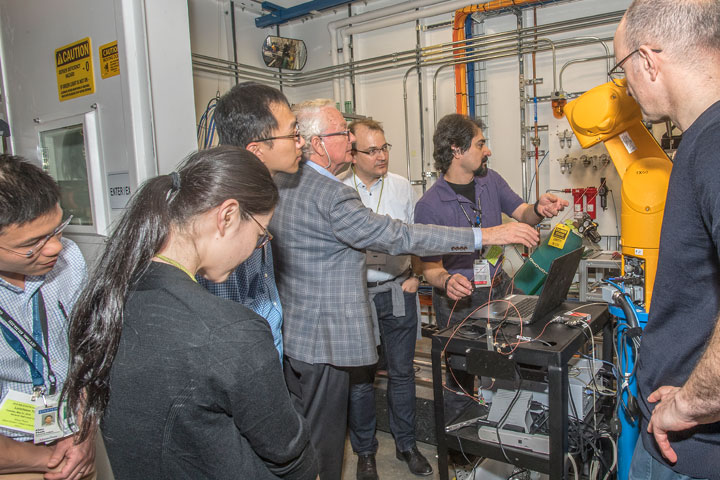 During this year's NSLS-II/ CFN Users' Meeting, the attendees toured both facilities to get a look at the new developments at various beamlines, such as the Frontier Microfocusing Macromolecular Crystallography (FMX) beamline (shown in the photo), and experimental setups.

Complementary tools will soon be available next door to NSLS-II at the Laboratory for BioMolecular Structure, the new cryo-electron microscopy (cryo-EM) facility that will enable researchers to resolve the structures of large biological molecules. Like the HEX beamline, this new laboratory is funded by New York state and it is currently under construction.

CFN Director Chuck Black followed Hill’s presentation about NSLS-II current and future projects.  He spoke to the audience about the early days of CFN and described its 10th anniversary event held this past December. Black discussed CFN’s mission:

“It’s our job in the CFN to deliver transformative nanoscience breakthroughs, not just regular nanoscience,” he said.

10 years in, CFN is thriving and productive, having achieved a six-fold increase in the yearly number of users supported to the level of nearly 600 per year.

Black described some of the exciting new nanoscience capabilities that CFN has recently commissioned. These include a near-field infrared nano-spectroscopy instrument capable of characterizing material properties with 10 nanometer spatial resolution, a plasma-enhanced atomic layer deposition tool for atomically-precise synthesis of metallic and nitride thin films, a video-rate atomic force microscope for studying kinetics and dynamics in thin films and liquids, and a new energy-dispersive x-ray spectroscopy detector the facility’s most popular transmission electron microscope.  These tools are available and ready to support new, exciting user science.

“To all of our users, we need you to be thinking big,” he said. “Please bring your best ideas and we’ll help you achieve them.”

Black was followed by Jim Murphy, who heads the Scientific User Facilities Division within DOE’s Basic Energy Sciences program. He provided a DOE perspective, starting with budget information. He explained how the budget is split between operating existing facilities, construction for new capabilities, and research funds—all of which are necessary to achieve DOE’s mission.

Murphy also talked about the status of light sources across the world. It is “a very competitive landscape,” he said, with upgrades taking place at several facilities. In the U.S. alone, four upgrades are underway, including those at the Advanced Light Source and the Advanced Photon Source, two DOE Office of Science User Facilities at DOE’s Lawrence Berkeley National Laboratory and Argonne National Laboratory, respectively. These upgrades are part of a strategy for maintaining U.S. world leadership in light source science and technology.

The first speaker Wednesday morning was Argonne’s F. Joseph Heremans, who discussed how his group is using defects in the molecular structure of diamond as potential “qubits,” or quantum bits, which are the basis of quantum information technology systems.

Following Heremans’ talk, the Julian David Baumert Ph.D. Thesis Award was presented to this year’s recipient, Chao Wang of the University of Delaware. Baumert was a young physicist at Brookhaven who died in 2006; this award is presented each year to another young researcher who completed a thesis project that included measurements taken at NSLS or NSLS-II. 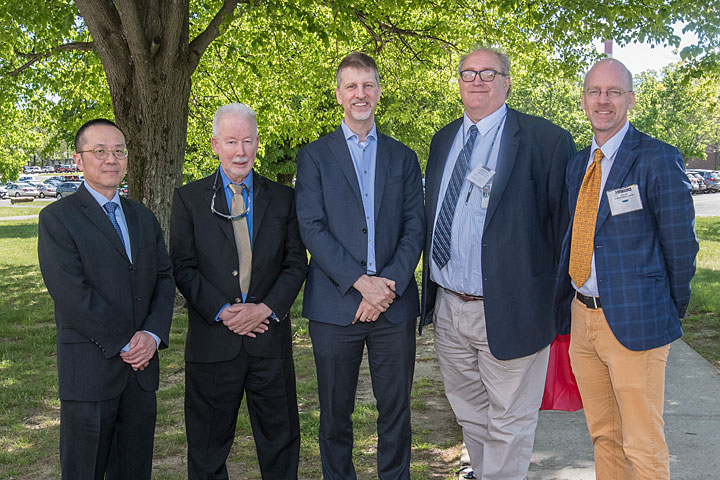 Wang’s research focuses on using polymers to create “antifreeze hydrogels,” which are materials that could be used as coatings to inhibit the formation of ice on objects and surfaces where ice is unwanted, such as power lines and airplanes. He has done work at NSLS-II’s Complex Materials Scattering (CMS) beamline.

“This is the most significant event in my professional career,” he said while accepting the award.

Richard Vaia of the Air Force Research Laboratory was the morning’s final speaker. He discussed the opportunities and challenges faced by the Air Force as it works to develop new materials for military applications, as well as how they are using synchrotrons light sources to accelerate that development.

“Synchrotron light sources are incredibly valuable for this,” he said. “They are complementary to our in-house capabilities.”

He provided a few examples, including how ultrafast x-ray imaging is being used to understand how shock waves travel through structures, which could advance the Air Force’s understanding of injectors. Vaia also discussed using microscopy to understand the mechanical performance of alloys that would be used to make turbine engines.

Following the plenary sessions each day, the meeting proceeded with 10 in-depth workshops on various scientific topics:

The summaries for each workshop can be found on the Users' Meeting's website.

The meeting was well attended and offered plenty of opportunities for scientific exchange and discussions between this year’s attendees. Feedback from the meeting attendees indicated they enjoyed the stimulating and engaging discussions across many fields of research.

CFN and NSLS-II look forward to a bright future and many more engaging workshops and meetings to come.