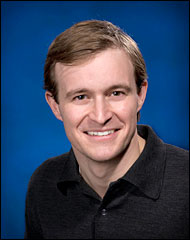 “General Electric (GE) turns technology into products every day,” GE’s Jeffrey Keller explained on his first day at BNL as the Laboratory’s entrepreneur in residence. “There is a lot of commercial value in the research done at national labs such as Brookhaven, but scientists generally aren’t marketers. I’m here to help with the business of taking technology to the marketplace.”

Trained in both science and business, Keller, who is currently manager of external technology initiatives at GE in Niskayuna, NY, brings his expertise in identifying energy technologies that are ripe for commercialization to his new, part-time position at BNL. After he earned a B.A. in biology from the University of Virginia in 1997, Keller began his career as a mergers and acquisitions analyst at Harris Williams & Co., an investment bank in Richmond, Virginia. But he wanted to combine finance with a career in technology, so in 2000 he decided to study cell and developmental biology at Vanderbilt University, eventually earning a Ph.D. in that field in 2006. He next attended Cornell University, where he earned an M.B.A. in 2007. He then began working at GE’s Electric Global Research Center in 2007 as a business development manager and was promoted to his current position in 2008.

During his one-year term at the Lab, Keller will be stationed at the Lab’s Office of Technology Commercialization and Partnerships, where he plans to be on site about four to six days per month. First on Keller’s agenda will be a review of BNL’s portfolio of inventions that have not yet been licensed. Based on this review, he may contact selected innovators to determine if their work may be ready for commercialization. Also, innovators at the Laboratory are welcome to reach out to Keller. He is bound to confidentiality according to a nondisclosure agreement.

While Keller will focus on energy technologies funded by EERE, any technologies that further the mission of EERE are eligible to be considered for commercialization, provided that DOE funds them. Once Keller identifies a promising technology, he will prepare a business plan for evaluation by his colleagues, and work with his team within GE to assemble a management team and raise capital to “spin out” a new company based on the BNL technology.

Keller will look for technologies that are unique and “the first in the field.” Innovations that open new markets or are disruptive to established cost or performance parameters are of most interest. “The risks of venture capital investing are extremely high, and in order to offset those with commensurate returns, we look for technologies that have the potential to go far beyond what currently exists in the market,” Keller said. He is particularly interested in renewable energy and energy efficiency technologies, as well as technologies to remediate greenhouse gases. To be considered for commercialization, a technology should have the potential to attract a large market.

“Like all venture capitalists, GE can provide funding to develop a promising technology,” Keller said. “What is unique about our early stage investing efforts is that we also bring unparalleled expertise in converting technology to products as well as the commercial platforms of GE businesses to pull technology to market quickly and in volume.”

Under the EERE program’s license agreement, royalties garnered from a commercialized invention would be shared among the newly founded company, the inventor, and the Laboratory. The percent of equity share for each would be negotiated.

To arrange an appointment with Keller, contact him at keller@ge.com.