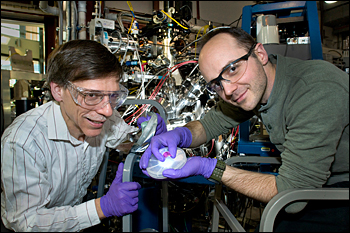 E-readers that can be bent and folded, “smart” bandages that signal when they need changing based on oxygen levels, and biodegradable radio frequency identification tags that help companies track and manage stock – these are all real possibilities in the field of organic electronics, which uses carbon-based materials that are intrinsically semiconductors. Recently, using Brookhaven’s National Synchrotron Light Source (NSLS), a group of researchers from the National Institute of Standards and Technology (NIST), Arizona State University, and the University of Oulu, Finland, analyzed one promising organic semiconducting material in an effort to bring these technologies, and many more, to the marketplace.

As opposed to conventional electronics, which feature inorganic metal conductors such as silicon or copper, organic electronics – also known as plastic electronics – can be manufactured using technology as common as an ink jet printer.

This makes possible the production of lightweight, flexible, and robust electronics at low cost. Plastic electronics don’t replace silicon technologies, and they aren’t likely to fuel the mainstream electronic industry’s overall drive to produce ever smaller and ever faster devices. Instead, organic electronics offer the possibility of brand new, complementary markets. That is, if industries are able to create reliable products easily.

“With organic materials, reproducibility and reliability are hard to achieve because the ink dries differently almost every time,” said NIST researcher Dean DeLongchamp. “You never know exactly what you’re going to get.”

In this study, the researchers analyzed the structure of dried films made from a particular organic semiconductor often used in photovoltaic cells, PTCBI. Classified as an “n-type” semiconductor, PTCBI is one of the rare commercially available organic-electronic materials that actually transport electrons. The other kind of organic semiconductors, known as p-type, transmit positive charges – called “holes” because the moving areas of positive charge are places where an electron is missing. In order to work, a complementary organic circuit needs both p- and n-type semiconductors.

The researchers used powerful x-ray techniques at NSLS beamline U7A to determine the orientation and order of PTCBI as it was formed on different surfaces. Their results, which were published in the August 3, 2009, edition of Advanced Functional Materials, are surprising.

Illustrations of PTCBI films with two different orientations. Researchers found that those laying down (left) exhibit slower transport than those that stand up (right).

“We found that the contact face of PTCBI depends on what type of surface it was deposited upon, which is very unusual,” DeLongchamp said. “Typically, we find that an organic semiconductor’s crystals change size with the dielectric substrate it is deposited on. But here, the crystals are actually oriented differently on different dielectrics.”

The researchers then linked the orientation of the PTCBI crystals to performance: In general, substrates that allow the crystal’s individual molecules to stand up straight — and therefore have a large amount of electronic overlap — exhibit the fastest transport. But substrates that force the molecules to lie down flat exhibit poorer performance.

“These fundamental relationships provide practical rules for the synthesis and processing of organic electronics,” DeLongchamp said. “The many potential opportunities for performance enhancement indicate a promising future ahead for organic electronics.”

Funding was provided by the Army Research Laboratory, the Finland Distinguished Professor Program, and the Graduate School of Modern Optics and Photonics at the University of Joensuu.

Other authors include Parul Dhagat and Ghassan Jabbour, from the Arizona State University; Hanna Haverinen, from the University of Oulu, Finland; and R. Joseph Kline, Youngsuk Jung, and Daniel Fischer, all from NIST.