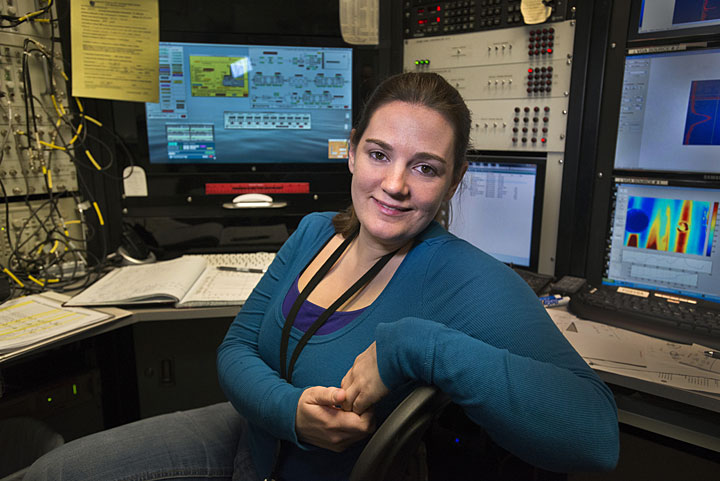 Swinson-Cruz joined the Lab Sept. 2, 2010, as a research associate in the Physics Department working on the ATF. She moved with the rest of the ATF team to the Collider-Accelerator Department in April 2013 where she was named assistant scientist in 2014, and associate scientist in 2016. In October 2017, she was named Deputy Director of the ATF, supporting facility Director Mark Palmer.

Throughout these years, Swinson-Cruz made major contributions to the operation of the facility both as an electron beam operator and researcher, and by supporting the facility’s transition to a U.S. Department of Energy (DOE) Office of Science National User Facility in 2015. Since then, she played a central role in interfacing with the broader advanced accelerator and laser science community to define the critical science priorities for the ATF’s future.

“Whatever she got involved in she invested herself completely,” Palmer said. “She was committed to operational excellence of the facility while simultaneously pursuing opportunities to expand her own research efforts.” This culminated in November 2018 when the ATF’s Program Advisory Committee gave a new experiment that she designed and proposed its highest scientific rating – an experiment that the rest of the ATF team will now be executing to her high standards.

Swinson-Cruz was born in Darwen and grew up in Rishton in Lancashire, England. She studied physics with computing at Queen Mary College at the University of London, earning her bachelors in science in 2005, and did her doctoral work in accelerator physics at the University of Oxford under the guidance of Prof. Phil Burrows. As part of her doctoral work, she conducted studies from 2005 to 2008 at the Stanford Linear Accelerator Center (SLAC) and from 2007 to 2009 at the High Energy Accelerator Research Organization known as KEK in Tsukuba, Japan.

In 2017, for the Lab’s effort to develop an electron-ion collider, Swinson-Cruz worked closely with Brookhaven physicist Steven Brooks on successful tests at the ATF of a special guide channel to transport electron beams over a wide range of energies. She steered the first beam through the ATF line and played an essential role in running the experiments.

In the second half of 2018, Swinson-Cruz helped Palmer and others at the Lab to organize an accelerator outreach event, “Accelerating to a Bright Future,” to showcase the capabilities of Brookhaven’s accelerators to potential partners. The event allowed the Lab to develop new connections that are expected to yield future accelerator partnerships and helped to cement several efforts that were in their formative stages.

Swinson-Cruz participated in Brookhaven’s Mentoring Program, and was a mentee to Lab Director Doon Gibbs.

“I was aware that she was a very talented physicist early on after she got here,” Gibbs said. “She was young, energetic, and motivated—really interested in what she was doing, both at ATF and in her career. But what I learned as her mentor was, in addition to being a talented physicist, she was also a science leader.”

Swinson-Cruz had a knack for seeing the big picture, Gibbs said.

“She could talk about her strengths and weaknesses and those of others in a way that was balanced, forgiving, and appropriate,” he recalled. “And she was focused on the end game, with what we could accomplish by working together and how we could get there.”

Gibbs said that focus helped her as a representative of Brookhaven Women in Science (BWIS), the nonprofit organization based at the Lab that promotes opportunity for women in science.

“At our first meeting after she took on a leadership role in BWIS, I agreed with her that there was work to be done to improve our performance in I&D. She was open in acknowledging the facts and then we moved on to what we were going to do about them,” he said. “She listened to plans, and commented constructively about what she thought was good and what could be improved. She was a very effective partner in that regard and as a result had a significant impact. She was a natural leader.”

Bringing Women and Other Underrepresented Groups to Science

Swinson-Cruz was an advocate for bringing women and young people from different backgrounds into science, and into physics in particular. She was active in Brookhaven’s Association for Students and Post Docs, serving as the organization’s president in 2014. She also mentored students from local high-schools.

Her friend and fellow BWIS member Kathy Walker recalled conversations to persuade Swinson-Cruz to join to take on a leadership role in BWIS.

“I wanted to bring younger people in, people who were interested in the issues and could do something about it,” Walker said. “And I saw she had a lot to offer, how she was a good person, a nice person.”

In 2013, she was featured in a U.S. Department of Energy (DOE) web series “Women @ Energy,” that highlighted women improving the world through their careers in science, technology, engineering and mathematics (STEM) across the DOE complex.

And at a 2013 Women’s History Month event, Swinson-Cruz spoke of her decision to pursue physics—and shared the advice she received from school advisors and her parents at critical moments along her academic and career journey.

That’s how Luis Cruz described what he felt when first introduced to his future wife, Swinson-Cruz, in 2011 at Brookhaven’s Center Club. Cruz, a member of the Lab’s Production Division, has worked at Brookhaven since 2006.

“There were no disagreements between us, ever,” he said. “She was great with everyone. She really knew how to talk to people. She had great patience. She was never condescending.”

“And all the women in my family would always go to her—she was basically the leader of the pack,” he said. “And I have a huge family, we’re talking 20 or 30 women.” Her bond with his daughters Jessica and Leah was immediate and enduring.

And despite the distance from her family back in England, theirs was a tight-knit family, as well, Cruz noted.

“Did she ever love her niece, Emily,” he said. “And she was definitely a daddy’s girl—100 percent.”

She and Mohan Nair of the Planning, Performance, and Quality Management Office also became close friends after an introduction at the Center Club. As Nair recalled, he heard her English accent and asked where she was from. She replied and also asked him about his accent, which was similar to hers, since he was from Malaysia, a former British colony. They were fast friends and, along with Joe Brady, then a member of the Nonproliferation and National Security Department, were spending many hours together outside of work, eventually becoming a fixture in the Cruz household.

“To be Christina’s friend (was) to know that, no matter what, you have a loyal, beautiful, amazing, intelligent, and ferocious ally in your corner,” Nair recalled from words he and Brady shared at her memorial service.

“Toward the end it was amazing, the strength that she showed,” he said. “And at the end Christina was more concerned with what was happening with everyone else, more than herself. She wanted to be sure her family and friends, her group at the ATF, had what they needed and were alright.”

On Dec. 7, 2018, she and Cruz were married in a ceremony at Stony Brook University Hospital, where she was receiving treatment.

When not working on physics and accelerators she enjoyed baking, taking zumba classes, spending time outdoors, mountaineering, hiking, rock climbing, reading fiction and nonfiction, and spending time with her family and friends.

Swinson-Cruz was the daughter of Gerard and Beverly Swinson, sister to Joanne and Andrew, aunt to Emily, wife of Luis, and step-mother to Jessica and Leah.