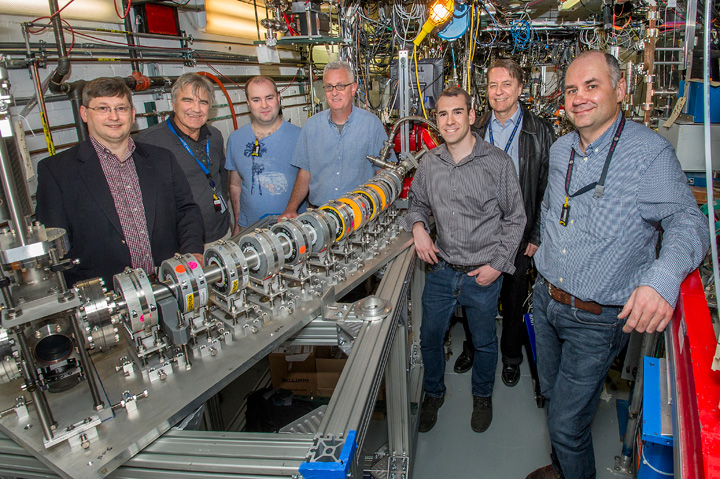 An advanced particle accelerator designed at the U.S. Department of Energy's Brookhaven National Laboratory could reduce the cost and increase the versatility of facilities for physics research and cancer treatment. It uses lightweight, 3D-printed frames to hold blocks of permanent magnets and an innovative method for fine-tuning the magnetic field to steer multiple beams at different energies through a single beam pipe.

With this design, physicists could accelerate particles through multiple stages to higher and higher energies within a single ring of magnets, instead of requiring more than one ring to achieve these energies. In a medical setting, where the energy of particle beams determines how far they penetrate into the body, doctors could more easily deliver a range of energies to zap a tumor throughout its depth.

Scientists testing a prototype of the compact, cost-effective design at Brookhaven's Accelerator Test Facility (ATF)—a DOE Office of Science User Facility—say it came through with flying colors. Color-coded images show how a series of electron beams accelerated to five different energies successfully passed through the five-foot-long curve of magnets, with each beam tracing a different pathway within the same two-inch-diameter beam pipe. 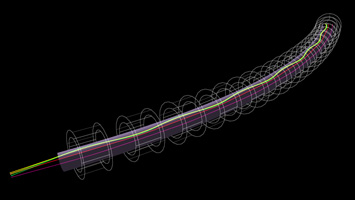 "For each of five energy levels, we injected the beam at the 'ideal' trajectory for that energy and scanned to see what happens when it is slightly off the ideal orbit," said Brookhaven Lab physicist Stephen Brooks, lead architect of the design. Christina Swinson, a physicist at the ATF, steered the beam through the ATF line and Brooks' magnet assembly and played an essential role in running the experiments.

"We designed these experiments to test our predictions and see how far away you can go from the ideal incoming trajectory and still get the beam through. For the most part, all the beam that went in came out at the other end," Brooks said.

The beams reached energies more than 3.5 times what had previously been achieved in a similar accelerator made from significantly larger electromagnets, with a doubling of the ratio between the highest and lowest energy beams.

"These tests give us confidence that this accelerator technology can be used to carry beams at a wide range of energies," Brooks said. 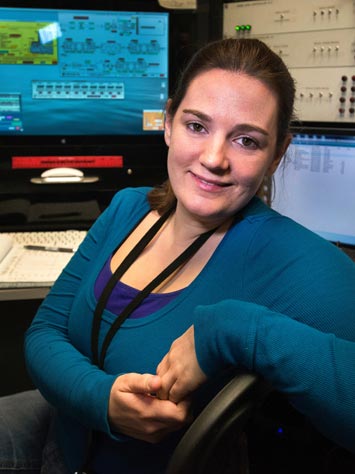 ATF physicist Christina Swinson steered the first beam through the ATF line and the arced magnet assembly and played an essential role in running the experiments.

Most particle accelerators use electromagnets to generate the powerful magnetic fields required to steer a beam of charged particles. To transport particles of different energies, scientists change the strength of the magnetic field by ramping up or down the electrical current passing through the magnets.

Brooks' design instead uses permanent magnets, the kind that stay magnetic without an electrical current—like the ones that stick to your refrigerator, only stronger. By arranging differently shaped magnet blocks to form a circle, Brooks creates a fixed magnetic field that varies in strength across different positions within the central aperture of each donut-shaped magnet array.

When the magnets are lined up end-to-end like beads on a necklace to form a curved arc—as they were in the ATF experiment with assistance from Brookhaven's surveying team to achieve precision alignment—higher energy particles move to the stronger part of the field. Alternating the field directions of sequential magnets keeps particles oscillating along their preferred trajectory as they move through the arc, with no power needed to accommodate particles of different energies.

Brooks' successful test lays the foundation for the CBETA accelerator, in which bunches of electrons will be accelerated to four different energies and travel simultaneously within the same beampipe, as shown in this simulation.

First they used a 3D printer to create plastic frames to hold the shaped magnetic blocks, like pieces in a puzzle, around the central aperture. "Different sizes, or block thicknesses, and directions of magnetism allow a customized field within the aperture," Brooks said.

After the blocks were tapped into the frames with a mallet to create a coarse assembly, John Cintorino, a technician in Lab's magnet division, measured the strength of the field. The team then fine-tuned each assembly by inserting different lengths of iron rods into as many as 64 positions around a second 3D-printed cartridge that fits within the ring of magnets. A computational program Brooks wrote uses the coarse assembly field-strength measurements to determine exactly how much iron goes into each slot. He's also currently working on a robot to custom cut and insert the rods.

The end-stage fine-tuning "compensates for any errors in machining and positioning of the magnet blocks," Brooks said, improving the quality of the field 10-fold over the coarse assembly. The final magnets' properties match or even surpass those of sophisticated electromagnets, which require much more precise engineering and machining to create each individual piece of metal.

"The only high-tech equipment in our setup is the rotating coil we use to do the precision measurements," he said.

Applications and next steps

The lightweight, compact components and simplified operation of Brooks' permanent magnet beam transport line would be "a dramatic improvement from what is currently on the market for delivering particle beams in cancer treatment centers," said Dejan Trbojevic, Brooks' supervisor, who holds several patents on designs for particle therapy gantries.

A gantry is the arced beamline that delivers cancer-killing particles from an accelerator to a patient. In some particle therapy facilities the gantry and supporting infrastructure can weigh 50 tons or more, often occupying a specially constructed wing of a hospital. Trbojevic estimates that a gantry using Brooks' compact design would weigh just one ton. That would bring down the cost of constructing such facilities.

"Plus with no need for electricity [to the magnets] to change field strengths, it would be much easier to operate," Trbojevic said.

The ability to accelerate particles rapidly to higher and higher energy levels within a single accelerator ring could also bring down the cost of proposed future physics experiments, including a muon collider, a neutrino factory, and an electron-ion collider (EIC). In these cases, additional accelerator components would boost the beams to higher energy.

For example, Brookhaven physicists have been collaborating with physicists at Cornell University on a similar fixed-field design called CBETA. That project, developed with funding from the New York State Energy Research and Development Authority (NYSERDA), is a slightly larger version of Brooks' machine and includes all the accelerator components for bringing electron beams up to the energies required for an EIC.  CBETA also decelerates electrons once they've been used for experiments to recover and reuse most of the energy. It will also test beams of multiple energies at the same time, something Brooks' proof-of-principle experiment at the ATF did not do. But Brooks' successful test strengthens confidence that the CBETA design is sound.

As Collider-Accelerator Department Chair Thomas Roser noted, "All these efforts are working toward advanced accelerator concepts that will ultimately benefit science and society as a whole. We're looking forward to the next chapter in the evolution of this technology."

The magnets for Brooks' experiment were built with Brookhaven's Laboratory Directed Research and Development funds for the CBETA project as part of the R&D effort for an early version of Brookhaven's proposed design for an EIC, known as eRHIC. Operation of the ATF is supported by the DOE Office of Science.