UPTON, NY – A team of five eighth grade students from R.C. Murphy Junior High School won first place as champions at the First Annual Suffolk County Middle School Math Tournament, which was co-sponsored by the Museum of Mathematics and the U.S. Department of Energy’s Brookhaven National Laboratory Office of Educational Programs and held at Brookhaven Lab on March 12, 2010. 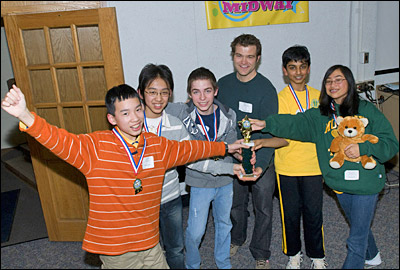 One hundred and twenty students participated in the competition, which was divided into a thirty-minute individual testing session followed by a twenty-minute team competition. Both testing periods were followed by a group discussion in which the students and competition officials reviewed the problem solutions.

“The underlying goal of the whole event is to get kids excited about math and let them have fun with math,” said Cindy Lawrence, the Tournament Director and Museum of Mathematics Chief of Operations who, after noticing the lack of math competitions for middle school kids in Suffolk County, spearheaded the organization of the new event. Lawrence also noted that including a solution-review section allows the kids to learn something from the competition.

“Math has a reputation problem that is undeserved in many ways from my point of view,” said Whitney. “To fix that, we want to use hands-on and exploratory activities that are fun and not usually associated with math to show kids that there is more to math than they get in school. The competition is another way to get kids engaged in math and to turn it into a social event.”

The manager of Brookhaven Lab’s Office of Educational Programs, Ken White, said, “The Lab was delighted to host this event because math provides the foundation upon which all of our science is conducted — it is an essential tool for research. We hope to build a strong, long-lasting relationship with the Museum of Mathematics.”

For a full listing of school participants and winners visit the Museum of Mathematics’ website.