The following news release was originally issued by the Massachusetts Institute of Technology. The story describes how scientists investigated a fractal-like pattern within the texture of a quantum material, neodymium nickel oxide. The research team used the Coherent Soft X-ray Scattering (CSX) beamline and the Electron Spectro-Microscopy (ESM) beamline of the National Synchrotron Light Source II (NSLS-II) to “see” and understand the material’s behavior. The researchers also used various capabilities at the Center for Functional Nanomaterials (CFN) to prepare and investigate properties of the measured material. NSLS-II and CFN are U.S. Department of Energy (DOE) Office of Science User Facilities located at DOE's Brookhaven National Laboratory. For more information about Brookhaven's role in this research, please reach out to Cara Laasch, laasch@bnl.gov.

The X-ray-focusing lens used in the experiment is based on a design used in lighthouses for centuries. 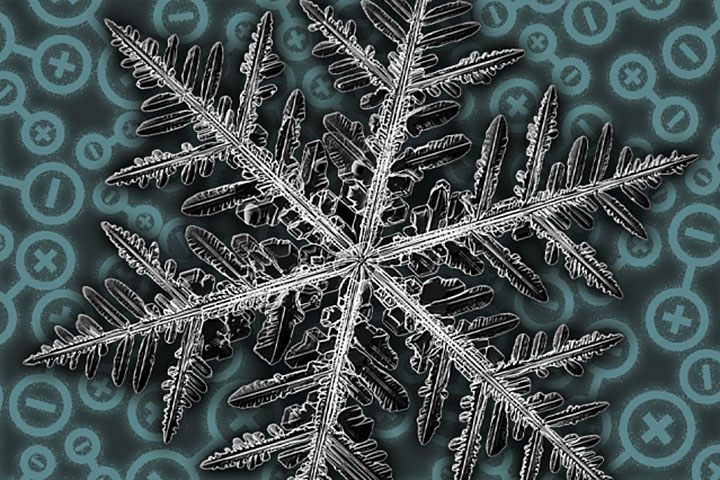 The repeating patterns in a snowflake are a classic example of beautiful, geometric fractals. Now MIT scientists have discovered fractal-like patterns in the magnetic configurations of a quantum material for the first time. Image: Chelsea Turner, MIT

A fractal is any geometric pattern that occurs again and again, at different sizes and scales, within the same object. This “self-similarity” can be seen throughout nature, for example in a snowflake’s edge, a river network, the splitting veins in a fern, and the crackling forks of lightning.

Now physicists at MIT and elsewhere have for the first time discovered fractal-like patterns in a quantum material — a material that exhibits strange electronic or magnetic behavior, as a result of quantum, atomic-scale effects.

The material in question is neodymium nickel oxide, or NdNiO3, a rare earth nickelate that can act, paradoxically, as both an electrical conductor and insulator, depending on its temperature. The material also happens to be magnetic, though the orientation of its magnetism is not uniform throughout the material, but rather resembles a patchwork of “domains.” Each domain represents a region of the material with a particular magnetic orientation, and domains can vary in size and shape throughout the material.

In their study, the researchers identified a fractal-like pattern within the texture of the material’s magnetic domains. They found that the distribution of domain sizes resembles a downward slope, reflecting a higher number of small domains and a lower number of large domains. If the researchers zoomed in on any part of the total distribution — say, a slice of midsized domains — they observed the same downward-sloping pattern, with a higher number of smaller versus larger domains.

As it turns out, this same distribution appears repeatedly throughout the material, no matter the size range, or scale at which it’s observed —  a quality that the team recognized as fractal in nature.

“The domain pattern was hard to decipher at first, but after analyzing the statistics of domain distribution, we realized it had a fractal behavior,” says Riccardo Comin, assistant professor of physics at MIT. “It was completely unexpected — it was serendipity.”

Scientists are exploring neodymium nickel oxide for various applications, including as a possible building block for neuromorphic devices — artificial systems that mimic biological neurons. Just as a neuron can be both active and inactive, depending on the voltage that it receives, NdNiO3 can be a conductor or an insulator. Comin says an understanding of the material’s nanoscale magnetic and electronic textures is essential to understand and engineer other materials for similar scopes.

Comin and his colleagues, including lead author and MIT graduate student Jiarui Li, have published their results today in the journal Nature Communications.

Comin and Li didn’t intend to find fractals in a quantum material. Instead, the team was studying the effect of temperature on the material’s magnetic domains.

“The material is not magnetic at all temperatures,” Comin says. “We wanted to see how these domains pop up and grow once the magnetic phase is reached upon cooling down the material.”

To do that, the team had to devise a way to measure the material’s magnetic domains at the nanoscale, since some domains can be as small as several atoms wide, while others span tens of thousands of atoms across.

Researchers often use X-rays to probe a material’s magnetic properties. Here, low-energy X-rays, known as soft X-rays, were used to sense the material’s magnetic order and its configuration. Comin and colleagues performed these studies using the National Synchrotron Light Source II at Brookhaven National Laboratory, where a massive, ring-shaped particle accelerator slings electrons around by the billions. The bright beams of soft X-rays produced by this machine are a tool for the most advanced characterization of materials.

“But still, this X-ray beam is not nanoscopic,” Comin says. “So we adopted a special solution that allows squeezing this beam down to a very small footprint, so that we could map, point by point, the arrangement of magnetic domains in this material.”

In the end, the researchers developed a new X-ray-focusing lens based on a design that’s been used in lighthouses for centuries. Their new X-ray probe is based on the Fresnel lens, a type of composite lens, that is made not from a single, curved slab of glass, but from many pieces of glass, arranged to act like a curved lens. In lighthouses, a Fresnel lens can span several meters across, and it’s used to focus diffuse light produced by a bright lamp into a directional beam that guides ships at sea. Comin’s team fabricated a similar lens, though much smaller, on the order of about 150 microns wide, to focus a soft X-ray beam of several hundred microns in diameter, down to about 70 nanometers wide.

“The beauty of this is, we’re using concepts from geometric optics that have been known for centuries, and have been applied in lighthouses, and we’re just scaling them down by a factor of 10,000 or so,” Comin says.

Using their special X-ray-focusing lens, the researchers, at Brookhaven’s synchrotron light source, focused incoming soft X-rays beams onto a thin film of neodymium nickel oxide. Then they scanned the much smaller, nanoscopic beam of X-rays across the sample to map the size, shape, and orientation of magnetic domains, point by point. They mapped the sample at different temperatures, confirming that the material became magnetic, or formed magnetic domains, below a certain critical temperature. Above this temperature, the domains disappeared, and the magnetic order was effectively erased.

Interestingly, the group found that if they cooled the sample back down to below the critical temperature, the magnetic domains reappeared almost in the same place as before.

“So it turns out the system has memory,” Comin says. “The material retains a memory of where the magnetic bits would be. This was also very unexpected. We thought we would see a completely new domain distribution, but we observed the same pattern re-emerging, even after seemingly erasing these magnetic bits altogether.”

After mapping the material’s magnetic domains, and measuring the size of each domain, the researchers counted the number of domains of a given size, and plotted their number as a function of size. The resulting distribution resembled a downward slope — a pattern that they found, again and again, no matter what range of domain size they focused in on.

“We have observed textures of unique richness spanning multiple spatial scales,” Li says. “Most strikingly, we have found that these magnetic patterns have a fractal nature.”

Comin says that understanding how a material’s magnetic domains arrange at the nanoscale, and knowing that they exhibit memory, is useful, for instance in designing artificial neurons, and resilient, magnetic data storage devices.

“Similar to magnetic disks in spinning hard drives, one can envision storing bits of information in these magnetic domains,” Comin says. “If the material has a sort of memory, you could have a system that’s robust against external perturbations, so even if subjected to heat, the information is not lost.”

This research was supported by the National Science Foundation and the Sloan Research Fellowship.