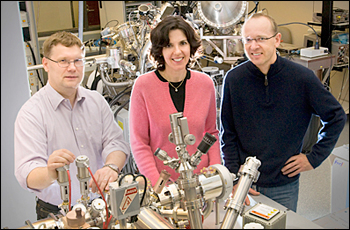 By controlling the layered growth of graphene – a relatively “new” form of carbon that’s just a single atom thick – researchers at Brookhaven National Laboratory have uncovered intriguing details about the material’s superior electrical and optical properties. Their findings could help position graphene as the next-generation material for future computers, digital displays, and electronic sensors.

“Graphene is a material that really has the potential to replace silicon in the electronics industry,” said Peter Sutter, a materials scientist in Brookhaven’s Center for Functional Nanomaterials. “It’s thin, transparent, strong, and highly conductive – all extremely appealing characteristics for everything from computer chips to touch screens and solar cells.”

One of the biggest challenges facing researchers is figuring out how to produce graphene in large quantities. The simplest method is peeling off single sheets of graphene from graphite, a material consisting of many graphene layers, with pieces of tape. But this method yields only small, jagged flakes that aren’t useful for most applications.

At Brookhaven, Sutter’s group grows graphene on a metal substrate, a technique that can produce single-layer sheets over very large areas, thousands of times larger than the pieces made with the “Scotch tape” method. First, a single crystal of ruthenium is heated up to temperatures higher than 1000 degrees Celsius while being exposed to a carbon-rich gas. At high temperatures, carbon atoms are able to squeeze into spaces within the metal crystal, similar to water being taken in by a sponge. As the crystal is slowly cooled, these carbon atoms are expelled to the surface of the metal, where they form individual layers of graphene. The number of layers formed can be controlled by the amount of carbon atoms initially absorbed into the ruthenium crystal.

“One of the unique aspects of this method is that we can control the thickness of the material, growing graphene layer by layer,” Sutter said. “This has allowed us to see how the structure and electronic properties of the material change as single atomic carbon layers are added to the substrate one at a time.”

Because the research group wanted to determine how the metal substrate affects the properties of graphene, it was important to monitor the layered material’s characteristics as it was grown — a capability provided by a special microscope at the National Synchrotron Light Source.

“First, we were able to watch how the material grew, and then, without moving it from the system, we were able to switch on the photon beam and determine its electronic structure,” Stutter said. “It’s extremely valuable to do everything in the same environment.”

To obtain measurements for the material with different numbers of graphene sheets, the group used micro-angle-resolved photoelectron spectroscopy, a technique that allows researchers to study the electronic structure of very small regions of interest.

Their findings, published in the July 8, 2009 edition of Nano Letters, were surprising.

“We found that if a single graphene sheet is grown on a metal like ruthenium, the metal binds very strongly to the carbon atoms and disrupts the characteristic properties normally found in isolated graphene,” Sutter said. “But those properties re-emerge in subsequent layers grown on the substrate.”

In other words, the first graphene layer grown on ruthenium satiates the metal substrate, allowing the rest of the layers to reclaim their normal properties.

The findings of the group, which also includes Brookhaven researchers Mark Hybertsen, Jurek Sadowski, and Eli Sutter, lays groundwork for future graphene production for advanced technologies, and helps researchers understand how metals — for example in device contacts — change the properties of graphene.

This work was funded by the U.S. Department of Energy Office of Basic Energy Sciences within the Office of Science.