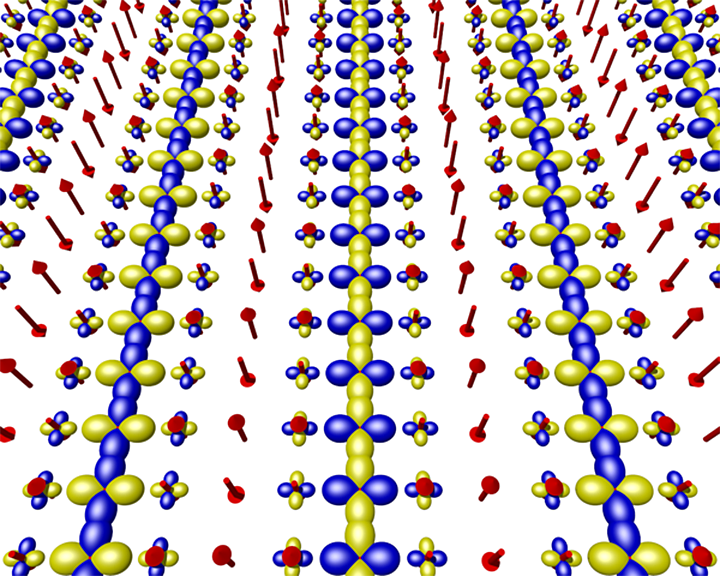 This schematic diagram maps out the binding energy (or superconducting energy gap) of individual electrons in a copper-oxide (cuprate) superconductor as measured by a sensitive microscope scanning across the surface. The size of the blue and yellow blobs surrounding individual atoms (red rods with arrowheads indicating their spin orientations) indicates the size of the energy gap (the larger the blobs the bigger the gap and stronger the electron-pair binding at that location). Note how when scanning across horizontal rows, the pattern increases to a maximum, then decreases to a minimum (no blobs), increases to another maximum with the opposite orientation (yellow and blue blobs switched) and then a minimum again, repeating this pattern every eight rows. These modulations are the first direct evidence of a "pair density wave," a state of matter that coexists with superconductivity and may play a role in its emergence.

UPTON, NY—For years physicists have been trying to decipher the electronic details of high-temperature superconductors. These materials could revolutionize energy transmission and electronics because of their ability to carry electric current with no energy loss when cooled below a certain temperature. Details of “high-Tc” superconductors’ microscopic electronic structure could reveal how different phases (states of matter) compete or interact with superconductivity—a state in which like-charged electrons somehow overcome their repulsion to pair up and flow freely. The ultimate goal is to understand how to make these materials act as superconductors without the need for supercooling.

Now scientists studying high-Tc superconductors at the U.S. Department of Energy’s Brookhaven National Laboratory have definitive evidence for the existence of a state of matter known as a pair density wave—first predicted by theorists some 50 years ago. Their results, published in the journal Nature, show that this phase coexists with superconductivity in a well-known bismuth-based copper-oxide superconductor. 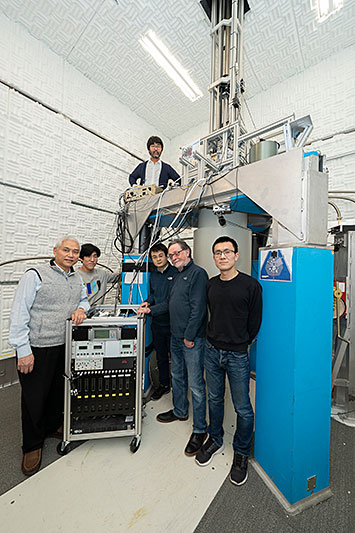 “What we measure is how many electrons at a given location ‘tunnel’ from the sample surface to the superconducting electrode tip of the SI-STM and vice versa as we vary the energy (voltage) between the sample and the tip,” Fujita said. “With those measurements we can map out the crystalline lattice and the electron density of states—as well as the number of electrons we have at a given location.”

When the material is not superconducting, electrons exist over a continuous spectrum of energies, each propagating at its own unique wavelength. But when the temperature goes down, the electrons start to interact—pairing up as the material enters the superconducting state. When this happens, scientists observe a gap in the energy spectrum, created by an absence of electrons within that particular energy range.

“The energy of the gap is equal to the energy it takes to break the electron pairs apart (which tells you how tightly bound they were),” Fujita said.

As the scientists scanned across the surface of the material, they detected spatially modulating energy gap structures. These modulations in the energy gap revealed that the strength of electrons’ binding varies—increasing to a maximum, then dipping to a minimum—with this pattern repeating every eight atoms across the surface of the regularly arrayed crystal lattice.

This work built on previous measurements showing that the current created by pairs of electrons tunneling into the microscope also varied in the same periodic way. Those modulations in current were the first evidence, though somewhat circumstantial, that the pair density wave was present.

Our results show that these two states of matter—pair density wave and superconductivity—coexist and interact.

The new results also included evidence of other key signatures of the pair density wave—including defects called “half-vortices”—as well as its interactions with the superconducting phase.

In addition, the energy gap modulations mirror other Brookhaven Lab research indicating the existence of modulating patterns of electronic and magnetic characteristics—sometimes referred to as “stripes”—that also occur with an eight-unit-cell periodicity in certain high-Tc cuprate superconductors.

“Together these findings indicate that the pair density wave plays a significant role in these materials’ superconducting properties. Understanding this state may help us make sense of the complex phase diagram that maps out how superconducting properties emerge under different conditions, including temperature, magnetic field, and charge-carrier density,” Fujita said.