A Material's Insulating Properties Can Be Tuned at Will

Most materials have a fixed ability to conduct heat, but applying voltage to this thin film changes its thermal properties drastically 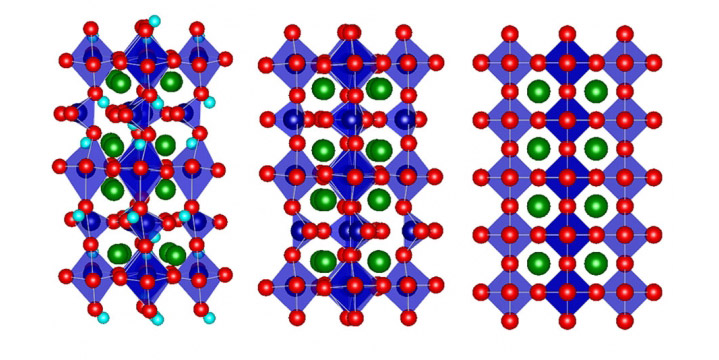 Materials whose electronic and magnetic properties can be significantly changed by applying electrical inputs form the backbone of all of modern electronics. But achieving the same kind of tunable control over the thermal conductivity of any material has been an elusive quest.

Now, a team of researchers at MIT have made a major leap forward. They have designed a long-sought device, which they refer to as an “electrical heat valve,” that can vary the thermal conductivity on demand. They demonstrated that the material’s ability to conduct heat can be “tuned” by a factor of 10 at room temperature.

This technique could potentially open the door to new technologies for controllable insulation in smart windows, smart walls, smart clothing, or even new ways of harvesting the energy of waste heat.

The findings are reported today in the journal Nature Materials, in a paper by MIT professors Bilge Yildiz and Gang Chen, recent graduates Qiyang Lu PhD ’18 and Samuel Huberman PhD ’18, and six others at MIT and at Brookhaven National Laboratory.

The researchers used a material called strontium cobalt oxide (SCO), which can be made in the form of thin films. By adding oxygen to SCO in a crystalline form called brownmillerite, thermal conductivity increased. Adding hydrogen to it caused conductivity to decrease.

The process of adding or removing oxygen and hydrogen can be controlled simply by varying a voltage applied to the material. In essence, the process is electrochemically driven. Overall, at room temperature, the researchers found this process provided a tenfold variation in the material’s heat conduction. Such an order-of-magnitude range of electrically controllable variation has never been seen in any material before, the researchers say.

In most known materials, thermal conductivity is invariable — wood never conducts heat well, and metals never conduct heat poorly. As such, when the researchers found that adding certain atoms into the molecular structure of a material could actually increase its thermal conductivity, it was an unexpected result. If anything, adding the extra atoms — or, more specifically, ions, atoms stripped of some electrons, or with excess electrons, to give them a net charge — should make conductivity worse (which, it turned out, was the case when adding hydrogen, but not oxygen).

“It was a surprise to me when I saw the result,” Chen says. But after further studies of the system, he says, “now we have a better understanding” of why this unexpected phenomenon happens.

It turns out that inserting oxygen ions into the structure of the brownmillerite SCO transforms it into what’s known as a perovskite structure — one that has an even more highly ordered structure than the original. “It goes from a low-symmetry structure to a high-symmetry one. It also reduces the amount of so-called oxygen vacancy defect sites. These together lead to its higher heat conduction,” Yildiz says.

Heat is conducted readily through such highly ordered structures, while it tends to be scattered and dissipated by highly irregular atomic structures. Introducing hydrogen ions, by contrast, causes a more disordered structure.

While the thermal conductivity can be varied by about a factor of 10 at room temperature, at lower temperatures the variation is even greater, she adds.

The new method makes it possible to continuously vary that degree of order, in both directions, simply by varying a voltage applied to the thin-film material. The material is either immersed in an ionic liquid (essentially a liquid salt) or in contact with a solid electrolyte, that supplies either negative oxygen ions or positive hydrogen ions (protons) into the material when the voltage is turned on. In the liquid electrolyte case, the source of oxygen and hydrogen is hydrolysis of water from the surrounding air.

“What we have shown here is really a demonstration of the concept,” Yildiz explains. The fact that they require the use of a liquid electrolyte medium for the full range of hydrogenation and oxygenation makes this version of the system “not easily applicable to an all-solid-state device,” which would be the ultimate goal, she says. Further research will be needed to produce a more practical version. “We know there are solid-state electrolyte materials” that could theoretically be substituted for the liquids, she says. The team is continuing to explore these possibilities, and have demonstrated working devices with solid electrolytes as well.

Chen says “there are many applications where you want to regulate heat flow.” For example, for energy storage in the form of heat, such as from a solar-thermal installation, it would be useful to have a container that could be highly insulating to retain the heat until it’s needed, but which then could be switched to be highly conductive when it comes time to retrieve that heat. “The holy grail would be something we could use for energy storage,” he says. “That’s the dream, but we’re not there yet.”

But this finding is so new that there may also be a variety of other potential uses. This approach, Yildiz says, “could open up new applications we didn’t think of before.” And while the work was initially confined to the SCO material, “the concept is applicable to other materials, because we know we can oxygenate or hydrogenate a range of materials electrically, electrochemically” she says. In addition, although this research focused on changing the thermal properties, the same process actually has other effects as well, Chen says: “It not only changes thermal conductivity, but it also changes optical properties.”

“This is a truly innovative and novel way for using ion insertion and extraction in solids to tune or switch thermal conductivity,” says Juergen Fleig, a professor of chemical technology and analytics at the University of Vienna, Austria, who was not involved in this work. “The measured effects (caused by two phase transitions) are not only quite large but also bi-directional, which is exciting. I’m also impressed that the processes work so well at room temperature, since such oxide materials are usually operated at much higher temperatures.”

Yongjie Hu, an associate professor of mechanical and aerospace engineering at the University of California at Los Angeles, who also was not involved in this work, says “Active control over thermal transport is fundamentally challenging. This is a very exciting study and represents an important step to achieve the goal. It is the first report that has looked in detail at the structures and thermal properties of tri-state phases, and may open up new venues for thermal management and energy applications.”

The research team also included Hantao Zhang, Qichen Song, Jayue Wang and Gulin Vardar at MIT, and Adrian Hunt and Iradwikanari Waluyo at Brookhaven National Laboratory in Upton, New York. The work was supported by the National Science Foundation and the U.S. Department of Energy.