The following story was originally published by the U.S. Department of Energy’s Office of Science. 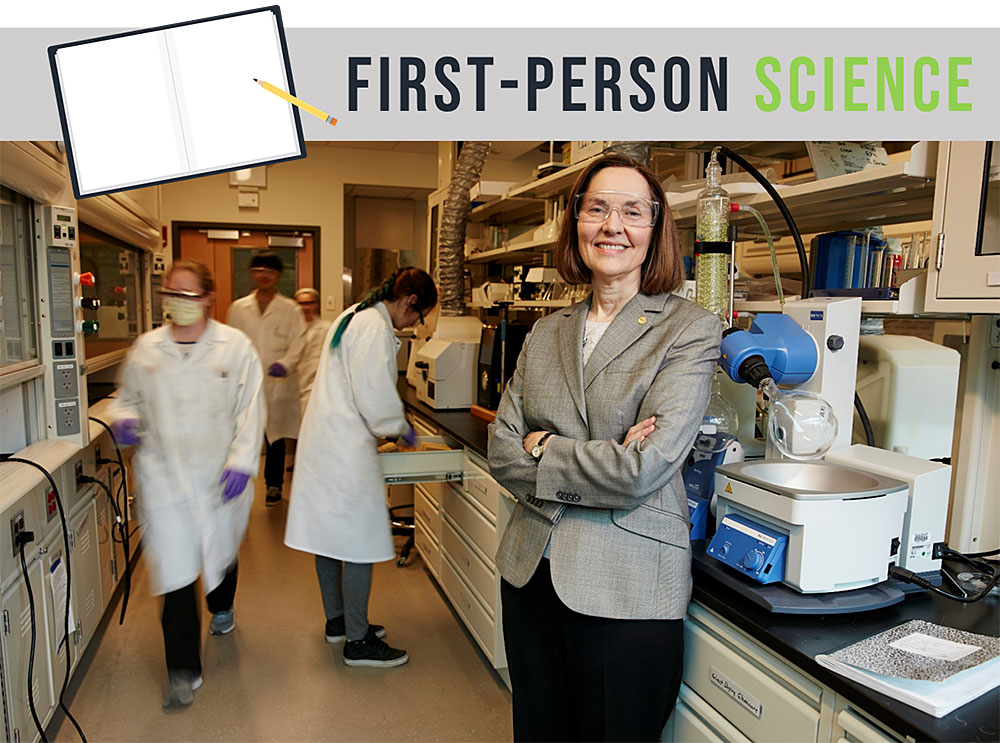 Through years of research, Esther Takeuchi and her team have discovered new ways to get the most out of magnetite, a potential material for batteries. Photo courtesy Stony Brook University

In the First-Person Science series, scientists describe how they made significant discoveries over years of research. Esther Takeuchi is a professor at Stony Brook University, a Chief Scientist in the Energy and Photon Sciences Directorate at Brookhaven Lab, and the director of the Center for Mesoscale Transport Properties, a Department of Energy Office of Science Energy Frontier Research Center.

When I look at a battery, I don’t just see a useful item for powering my phone. I see an object of extraordinary scientific complexity. Understanding that complexity really intrigues me.

Batteries force scientists to think about things at multiple scales of size and time: from what’s happening at the atomic level up to sizes you can measure with a ruler, from the fraction of a second it takes an electron to move to the years that a battery may be in use. As I researched batteries for medical applications in my first job after my postdoctoral work, I got hooked.

Now, I’m the director of the Department of Energy’s Center for Mesoscale Transport Properties, an Office of Science Energy Frontier Research Center. Together, my team and I work to understand the fundamental science behind battery chemistry.

Over the last several years, we’ve explored a material that could increase how long a battery could last on a single charge, known as their capacity. Making these batteries hold more capacity for a longer period of time could make plug-in electric vehicles drive farther, phones run longer, and batteries supporting the grid able to store more renewable energy. Examining this material, the team at the Center for Mesoscale Transport Properties created this evolving story with multiple layers of complexity that all fit together so beautifully.

The Science of Storage

In a battery, electrons and ions (positively charged atoms) move between two electrodes. These are the negative anode and the positive cathode. The electrons travel outside the battery to power a device and the positive ions flow through a liquid called an electrolyte. The electrons on the outside and ions on the inside should move smoothly back and forth between the cathode and anode. Changing the electrodes’ materials or the electrolyte’s chemistry can affect the battery’s capacity. Another important term to consider is power, which indicates the current coming out of the battery. High current means high power, which would allow a car to go faster.

Most materials currently used to make electrodes in lithium ion batteries are called insertion materials. These materials don’t change structure much as they charge and discharge, which makes them reliable. But they also transfer a very limited number of electrons. Is it possible to use materials where we could transfer more electrons?

Conversion materials may make that possible. Because these materials’ structure goes through substantial changes between charging and discharging, they provide greater technical challenges. But the benefit is that you can get a really substantial improvement in terms of the capacity delivered.

Our research looked at an iron-based conversion material called magnetite, Fe3O4. Many people will recognize this material from their everyday life. If you take a magnet and drag it across dry dirt, you’ll pick up a bunch of little black specks stuck to the magnet - that’s magnetite. It’s very low toxicity, low cost, and abundant. It also has a theoretical capacity of 924 milliamp-hours per gram – a really high number, about 2 to 3 times that of the negative electrode materials in common use.

Magnetite’s structure is densely packed. While that provides its high capacity, there’s also no big channel for ions to move through, which limits its ability to deliver high power. As it cycles, its structure shifts to one like rock salt and then to one with nanoparticles of iron metal. The challenge is to get the iron particles to return to an oxide, then be able to go back and forth many times.

Staying Apart and Clumping Together

First, we hypothesized that the size of the material’s crystallites would affect how the ions and electrons move. If you have small crystallites, the electrons and ions wouldn’t have as far to travel from the outside of the crystallite to the inside so that the battery uses all the relevant material.

Using tools to study the relationship between chemistry and electricity, we found that yes, indeed, crystallite size does matter. The smaller crystallites provided higher power and could pull more current out of the battery. That was pretty exciting.

But that was the crystallites by themselves. Knowing that they have to work in a larger system, we said, “Let’s take a look at the environment that the magnetite sees once it’s in an electrode.” One of our graduate students did a very nice job looking at the electrodes using two of DOE’s user facilities, the National Synchrotron Light Source-I and the Advanced Photon Source. We also cut apart the electrodes and looked at them through a very powerful microscope.

One thing quickly became apparent: The tiny magnetite crystallites didn’t stay individual and tiny. They all bunched together and the clumps acted like much larger crystallites. We thought that if we could prevent the crystallites from bunching up, we should be able to get even higher power and higher current. Our battery should get even better.

To keep the crystallites dispersed, we coated them in oleic acid, a fatty acid that’s in a lot of vegetable and animal fats. We then used heat to remove the oleic acid.

At first, the dispersed ones worked great – just like our modeling predicted. In the first few cycles, they had good voltage, high current delivery, and longer run time than the clumped up regular material.

Then we kept cycling the battery through charges and discharges. And lo and behold, within 10 cycles or so, the results crossed over. At about 25 cycles, the dispersed material started rapidly dropping off, getting worse and worse. It got to the point where it really wasn’t functioning well. In contrast, the batteries that had the clumps of crystallites hung in there. They kept going!

The batteries with the spread-out crystallites did, in fact, initially have more capacity. But as we kept cycling, they were no longer forming the iron oxide; they just got stuck in one phase. Over time, the electrodes developed far more resistance, which makes it really hard for ions and electrons to move around.

Seeing that cross-over at 10 cycles was really a defining moment. We realized the surrounding environment of the magnetite was absolutely crucial.

A Film of Many Mysteries

Something in the magnetite was breaking down the electrolyte. The electrolyte was forming a film on the surface of the particles or electrodes. Although this film in theory could protect the surface while allowing the ions to move, that generally doesn’t happen in conversion materials. Instead, their structure and volume change so much over time that the film increases the material’s resistance, resulting in less and less capacity.

Understanding more about how the film forms could allow us to change its nature. Unfortunately, this film is very elusive. It’s thin, amorphous, and sensitive to moisture.

Traditionally in battery research, you run the battery and then cut it open to analyze it. But once you take it apart, you no longer really know if the materials are the same as when the battery was running. So we took a different approach. A set of techniques called operando techniques allow us to probe a functioning battery while it’s working. That allows us incredible insight. We can now gain real-time information within a real environment.

To analyze this film, we ran the batteries while they were in a calorimeter, a machine that measures heat flow. Knowing the fundamental chemical reactions, we used theory to calculate the heat these reactions should produce. As the battery charged and discharged in the lab, we measured the heat it generated. But we got too much! Contrary to our calculations, the magnetite transferred nine electrons instead of eight and produced more heat than expected. What was the source of that extra capacity and heat?

To find it, we used a technique that allowed us to watch the electrons moving and structure changing as the battery ran. In the early stages, when the battery was moving two electrons or less, the physical state of the iron matched up to the theoretical predictions. Then we saw something interesting. After two electrons, the electrons and ions kept flowing, but the state of the iron didn’t change until much later. It wasn’t switching back and forth anymore. We also saw that after two electrons had moved, there was a big increase in resistance.

Since the electrolyte played a key role in forming this film, we decided to modify it. If we used some new additives, maybe we could change how it reacts with the electrode materials. We selected an electrolyte solvent that contains fluoride. While few electrolyte solvents use fluoride, previous studies showed that this additive worked well with other materials that change in volume as they cycle, like magnetite.

Comparing batteries with the fluorinated electrolyte to those with no fluoride, we found the fluoride ones were four times better. It’s a huge effect. This happens because the electrolyte with fluoride breaks down at a higher voltage than the one without. Instead of the film forming on the individual iron nanoparticles, it formed on the crystal or clump of crystals. It still left the iron nanoparticles free to cycle back and forth and the material to return to iron oxide. Chemical analysis showed us that the film formed by the fluoride electrolyte also had a different, more stable chemical makeup than the original one.

We found the magnetite with the fluoride electrolyte switched states back and forth between charging and discharging well. The battery with the fluorine-containing electrolyte kept 92 percent of its capacity after 50 cycles – a big improvement.

The pieces all fit together.

As we started on a journey looking at magnetite, scientists from multiple disciplines collaborated to make this coherent picture of what was going on. We demonstrated that if you control the material’s size, how it clumps together, and how the surface interacts with the electrolyte, these high capacity conversion materials really look like feasible alternatives to current technologies. While there’s more work to do, this fundamental science shows the promise of these materials.

The Office of Science is the single largest supporter of basic research in the physical sciences in the United States and is working to address some of the most pressing challenges of our time. For more information, please visit www.energy.gov/science.