The following news release was originally issued by Princeton University. The story describes how researchers investigated the inorganic perovskite, cesium lead iodide, that has attracted wide attention for its potential in creating highly efficient solar cells. The researchers used x-ray diffraction performed at Princeton University and x-ray pair distribution function measurements performed at the National Synchrotron Light Source II (NSLS-II), a U.S. Department of Energy (DOE) Office of Science User Facility located at DOE's Brookhaven National Laboratory, to find the source of thermodynamic instability in the perovskite. For more information about Brookhaven's role in this research, please reach out to Cara Laasch, laasch@bnl.gov. 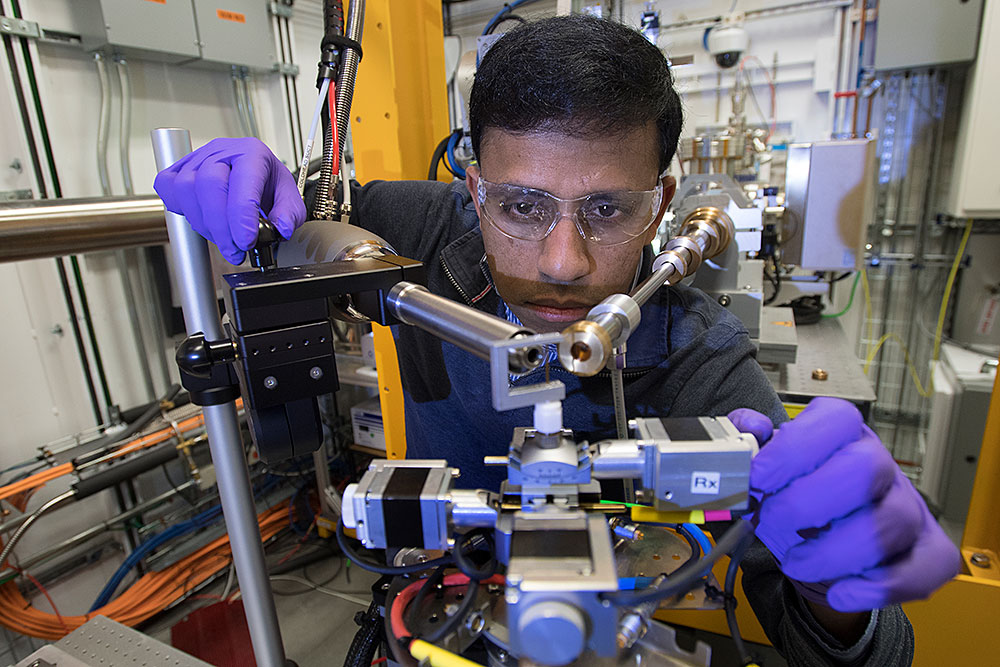 Milinda Abeykoon, one of the lead beamline scientists at Brookhaven Lab, in preparation of the challenging experiments with Robert Cava's team.

Researchers in the Cava Group at the Princeton University Department of Chemistry have demystified the reasons for instability in an inorganic perovskite that has attracted wide attention for its potential in creating highly efficient solar cells.

X-ray diffraction yields a clear experimental signature of this movement.

The research, “Understanding the Instability of the Halide Perovskite CsPbI3 through Temperature-Dependent Structural Analysis,” will be published next week in the journal Advanced Materials.

Daniel Straus, a postdoctoral research associate in the Cava Group and lead author on the paper, explained that while cesium occupies a single site within the structure at temperatures below 150 K, it “splits” into two sites above 175 K. Along with other structural parameters, this suggests evidence of the rattling behavior of cesium within its iodine coordination polyhedron. 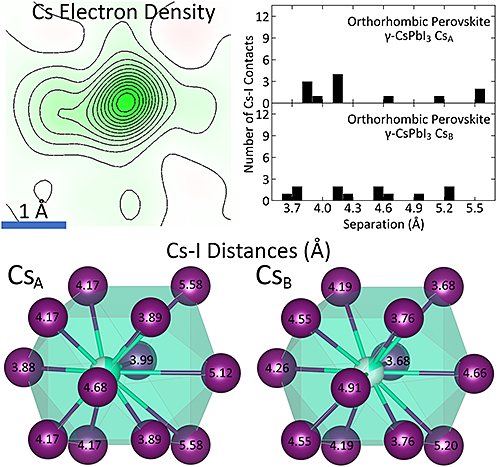 In addition, the low number of cesium-iodine contacts within the structure and the high degree of local octahedral distortion also contribute to the instability.

In the research, the single-crystal measurements characterized the average structure of the material. At Brookhaven, the X-ray pair distribution function allowed researchers to determine the behavior of the structure on the length scale of the unit cell. (A unit cell is the smallest repeating unit in a crystal.) It is on this local level that the high degree of octahedral distortion became obvious, said Straus.

The room-temperature metastability of CsPbI3 has long been a known factor, but it had not previously been explained.

"Finding an explanation for a problem that so many people in the research community are interested in is great, and our collaboration with Brookhaven has been beyond fantastic,” said Robert Cava, the Russell Wellman Moore Professor of Chemistry, an expert in synthesis and structure-property characterization. 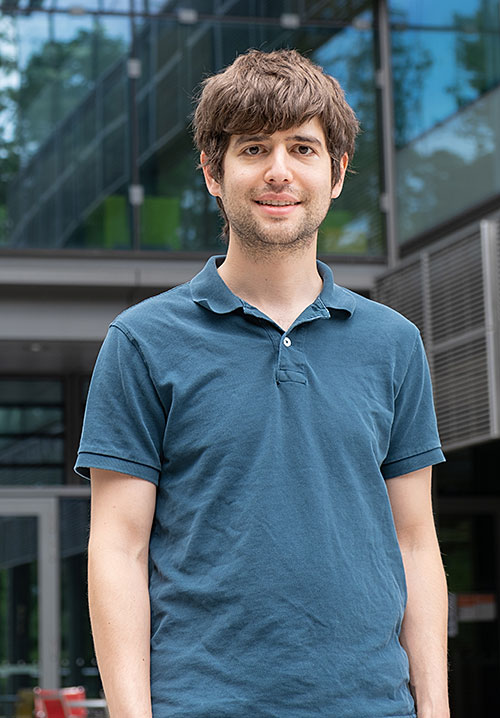 “If you want to make a solar cell with unmodified cesium lead iodide, it’s going to be very hard to work around this and stabilize this material,” said Straus. “You have to find a way to stabilize it that works around the fact that this cesium atom is a little bit too small. There are a couple ways people have tried to chemically modify CsPbI3 and they work okay. But there’s no point in just trying to make solar cells out of this bulk material without doing fancy things to it.”

Detailed structural information in the paper suggests methods to stabilize the perovskite phase of CsPbI3 and thus improve the stability of halide perovskite solar cells. The paper also reveals the limitations of tolerance factor models in predicting stability for halide perovskites. Most of these models currently predict that CsPbI3 should be stable.

A technique known as a pair distribution function measurement, which describes the distribution of distances between atoms, helped the Princeton researchers to further understand the instability. Using Brookhaven’s Pair Distribution Function (PDF) beamline at the National Synchrotron Light Source II, lead beamline scientist Milinda Abeykoon worked with samples of thermodynamically unstable CsPbI3, which he received from the Cava Lab in several sealed glass capillaries inside a container filled with dry ice.

Measuring these samples was challenging, said Abeykoon, because they would decompose quickly once removed from the dry ice.

“Thanks to the extremely bright X-ray beam and large area detectors available at the PDF beamline, I was able to measure the samples at multiple temperatures below 300 K before they degraded,” said Abeykoon. “When the X-ray beam bounces off the sample, it produces a pattern characteristic of the atomic arrangement of the material. This gives us the possibility to see not only what is happening at the atomic scale, but also how the material behaves in general in one measurement.”

Cava lauded the 45-year relationship he has had with Brookhaven, which began with experiments he completed there for his Ph.D. thesis in the 1970s. “We have had several great collaborations with Brookhaven,” he said.

The synthesis of the compound and analysis of the diffraction data in this research was supported by the Gordon and Betty Moore Foundation as part of the EPiQS initiative under Award No. GBMF-4412. The single crystal X-ray diffraction data collection was supported as part of the Institute for Quantum Matter, an Energy Frontier Research Center funded by the U.S. Department of Energy (DOE) Office of Science, Basic Energy Sciences under Award No. DE-SC0019331. This research used resources of the National Synchrotron Light Source II, a DOE Office of Science User Facility operated for the DOE Office of Science by Brookhaven National Laboratory under Contract No. DE-SC0012704.