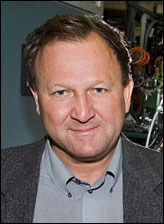 Anatoli Zelenski of the Collider-Accelerator Department (C-AD) received tenure on the basis of his creative, world-class contributions in the development of a new type of optically pumped polarized H- ion sources with an intensity 100 times higher than was possible in old-generation polarized sources. These achievements are based on his pioneering studies of spin-exchange polarization collisions.

Zelenski is also the leading scientist in the design and construction of the hydrogen jet and proton-carbon polarimeters, devices that allow for highly accurate measurements of proton polarization in RHIC.

“Anatoli is a scientist of the highest caliber and reputation,” said Derek Lowenstein, former C-AD chair. “He is known internationally for his expertise in producing polarized beam sources. His contributions have been crucial to the RHIC spin physics program, and there is no doubt that he will continue to make valuable contributions to the field of accelerator science in the future.”

Zelenski earned a Ph.D. in 1986 from the Institute for Nuclear Research (INR) in Moscow for his work in developing the first optically pumped polarized ion sources, and a second Ph.D. from INR in 2003 for work on spin-exchange methods of proton and H- minus ion beam polarization for high-energy accelerators and colliders. He worked at TRIUMF, Canada’s National Lab for nuclear and particle physics in 1992-99, before moving to C-AD as a physicist in 2000. He won BNL’s “Science and Technology Award” in 2003 and in 2006, he and a colleague won the prestigious Veksler Award, granted once every three years by the Russian Academy of Sciences, for “outstanding achievements in accelerator physics.” 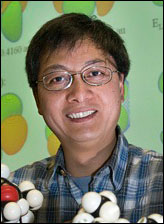 Hua-Gen Yu, Chemistry Department, has been awarded tenure for his outstanding contributions in theoretical chemistry. These include innovative and elegant algorithmic and computational advances in molecular quantum dynamics, particularly those allowing exact solutions of increasingly large molecular problems; and insightful new approaches to diverse other applications such as dissociative recombination and mixed classical/quantum models for polyatomic reactions. He has made key contributions to BNL’s chemical physics program through his independent scientific accomplishments and productive collaboration with experimental and theoretical scientists in the program.

“Hua-Gen has become a recognized leader in developing methodologies and algorithms that allow accurate quantum dynamics to be applied to complex molecular systems that others were unable to solve definitively,” said Chemistry Chair Alex Harris. “His original theoretical contributions are highly appreciated in the DOE chemical physics program and by the wider chemical physics community. We look forward to having his breadth and drive contribute to the future of theoretical chemical sciences research at Brookhaven.”

Yu earned his B.Sc. in chemistry and M.Sc. in atomic and molecular physics in Chengdu University of Sciences and Technology, China, in 1985 and 1988. After completing his Ph.D. in physical chemistry at Göteborg University, Sweden, in 2000, he came to Brookhaven as a research associate and was selected as one of the initial Goldhaber Fellows in 2001. He was then promoted to a tenure track scientific staff position in the Chemistry Department, becoming an assistant chemist in 2004, associate chemist in 2005, and chemist in 2007. He is pursuing research within the Gas Phase Molecular Dynamics Group in the Chemistry Department.