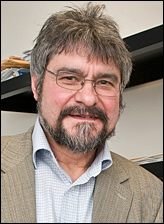 Ferdinand Willeke of the Accelerator Systems Division of the National Synchrotron Light Source II project was awarded tenure for his exceptional work on nonlinear beam dynamics; his contributions to the design, construction, operation and upgrade of the proton collider, HERA, of Deutsches Elektronen-Synchrotron (DESY) Laboratory in Germany; and his outstanding performance in directing the design and construction of the NSLS-II accelerator systems.

Ferdinand is an internationally recognized accelerator physicist, said Steve Dierker, Associate Laboratory Director for Light Sources. He has a highly practical sense, with extensive knowledge and experience in mechanical as well as electric and electronic engineering. He is a very versatile scientist who can support any accelerator project, and he is a valuable asset to the Laboratorys future.

Willeke received his Ph.D. in nuclear solid physics in 1980 from Freie University in Berlin and spent his early career translating methods developed in mathematical physics into tools of practical importance for assuring the stability of beams in large accelerators. He later participated in the commissioning of the first superconducting accelerator, the Tevatron at Fermi National Accelerator Laboratory, performing what was recognized as groundbreaking work in helping to prepare the machine for collider operation.

Willeke then devoted close to 20 years with the HERA lepton proton collider at DESY, where he was leading scientist and head of HERA, before joining the staff at Brookhaven as director of the Accelerator Systems Division of the NSLS-II project in July 2007. In this role, he led his team to a successful completion of the preliminary design for the accelerator systems and continues to oversee the NSLS-II projects component procurement, installation, testing, and commissioning. 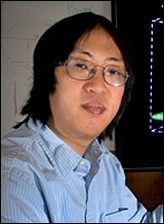 Guangyong Xu of the Condensed Matter Physics and Materials Science Department (CMPMS) received tenure for his original and creative application of neutron and x-ray scattering techniques to the study of complex materials.

Guangyong has made outstanding contributions on a broad range of topics from quantum spin fluids to high-temperature superconductors to relaxor ferroelectrics, said Peter Johnson, CMPMS Chair. He is an exceptional scientist and one of the top young neutron scatterers in the country, with the intelligence, creativity, skills, and experience necessary to advance the energy-related research that is crucial to the Labs and the nations future.

Xus contributions are most widely recognized in the area of relaxor ferroelectrics, a class of materials with interesting physics as well as important practical applications. He has made seminal discoveries using neutron scattering and highly original x-ray scattering experiments regarding the structure and dynamics of relaxor ferroelectrics, promising important practical applications for electronics-based technologies.

Xu earned his Ph.D. in 1999 from Johns Hopkins University, and joined Brookhavens Neutron Scattering Group in the Physics Department in 2002 as an assistant physicist, becoming an associate physicist in 2004. In 2006, he was promoted to physicist after the Neutron Scattering Group migrated to the new CMPMS Department. Between 2003 and 2008, Xu published 48 articles, of which he was first author of 21, including two letters in Science, one in Physical Review Letters, four in Applied Physics Letters, and two articles in Nature Materials. On these 21 papers, the average number of citations is more than 21 per paper; the quality and significance of Xus work is now recognized both nationally and internationally.