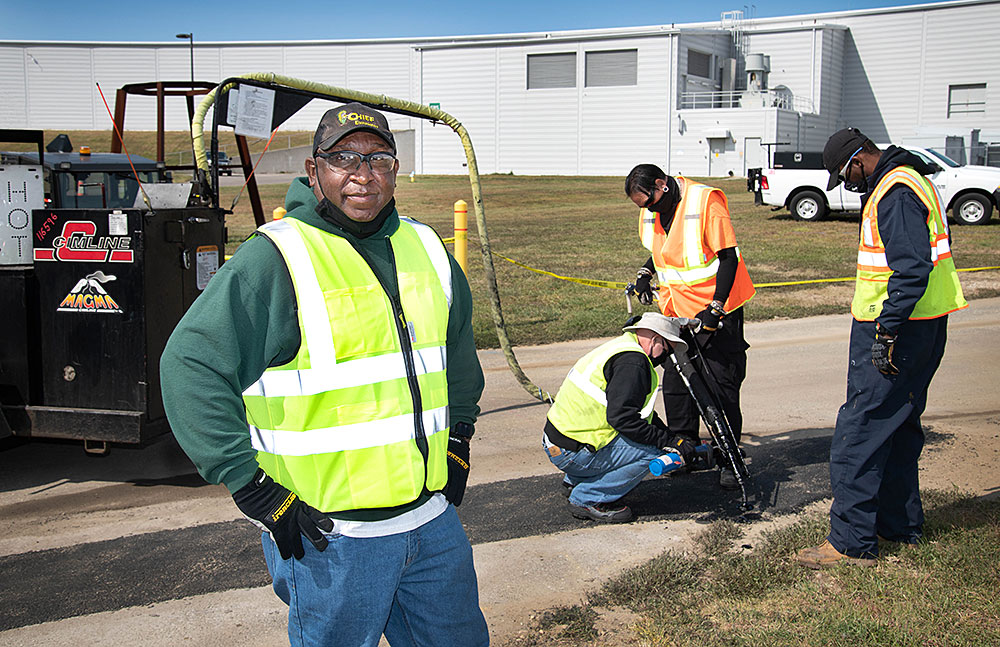 Dwayne Eleazer, a group leader in the Facilities & Operations Directorate’s Grounds Division at the U.S. Department of Energy’s (DOE) Brookhaven National Laboratory, is part of a team that keeps the Lab looking nice and running safely for employees and visitors. Outside of the Lab, he wears another hat as president of Stop the Violence Long Island, a nonprofit organization that aims to reduce violence and improve the lives of people in nearby minority communities.

“Being the president of Stop the Violence Long Island and being a group leader here at the Lab, I want to set the role of being a leader,” he said. “You just have to stay focused and do the right thing.”

Eleazer started his career at Brookhaven Lab 30 years ago as a custodian. He moved to the Grounds Division after seven years and later joined the roads and masons group where he’s been a group leader for nearly 15 years. His wife, Cheryl, a Lab employee for 32 years, works in purchasing for the Procurement & Property Management Division.

Eleazer's position allows him to meet people from across the Lab’s departments, get out into the field, and learn new things, which have become some of his favorite parts of the job.

“When you come through the Main Gate and see that the grass is all trimmed nice and you’re not hitting any potholes, it feels good to know that you actually chipped in to make it what it is,” Eleazer said.

When the workday is done, Eleazer turns his attention to Stop the Violence Long Island, which began in 2006 as a summer basketball tournament and has since grown to become a beloved annual event that brings the community together at Town of Riverhead parks. The goal of the tournament is to connect young men through sport as a means to foster positive, nonviolent relationships off the court.

“Our purpose is to try to reduce the violence and impact on the lives of minorities in our communities,” Eleazer said.

The effort keeps Eleazer busy each year, with his phone ringing off the hook for months with calls from those interested in getting involved in the tournament.

While the 2020 summer tournament was postponed due to COVID-19, Stop the Violence Long Island has more in the works to make a difference and to grow.

The volunteer organization recently registered as a 501(c)(3) nonprofit as way to expand the impact of its fund raising within the community, Eleazer said. The group is working on assembling backpack care packages for local students and is planning a Thanksgiving turkey drive for less fortunate families. Stop the Violence Long Island also promotes civic engagement and support for minority-owned small businesses.

“It’s an amazing feeling, the respect you get from people, when you do something like this and they see results,” Eleazer said.

In addition to running the nonprofit, Eleazer will take on a new role in his community as an appointed member of the Town of Riverhead's Law Enforcement Advisory Panel, known as LEAP, which is tasked with helping the town adopt a plan for police reform.