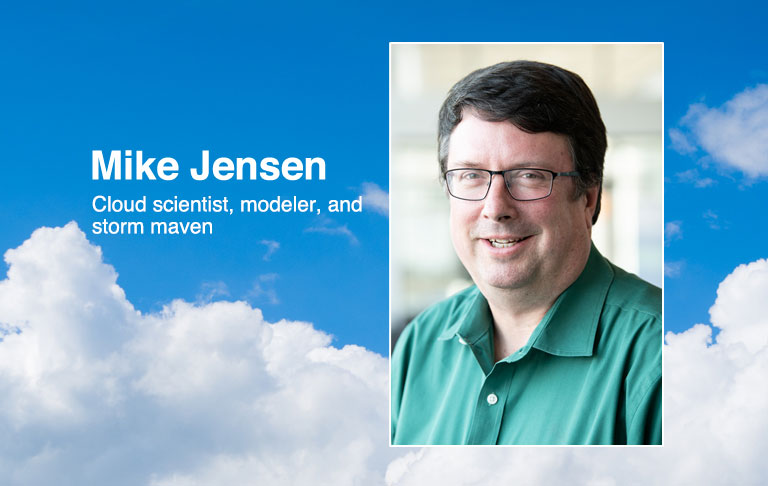 To understand the atmosphere, scientists play in a mix of disciplines, including physics, chemistry, computation, and engineering. But how many play the euphonium?

That would be Mike Jensen, a cloud-systems researcher at Brookhaven National Laboratory (BNL) in New York. Outside of work, he plays this baritone-range valved brass instrument, which resembles a shrunken tuba, and performs with four groups (in non-pandemic times) on his native Long Island, New York.

“That’s my relaxation,” says Jensen, who also sings in his church’s choir.

At work, Jensen has long been singing in a choir of atmospheric scientists who investigate deep convective clouds by using modeling and observations.

Since 1996, Jensen has mainly used observational data from the Atmospheric Radiation Measurement (ARM) user facility. As a graduate student, he was among a group of early adopters. ARM recorded and archived its first measurements in 1992.

“I’ve always been supported by ARM data,” says Jensen, who then added another signifier of his longevity with ARM, a U.S. Department of Energy (DOE) scientific user facility. “Since 1997, I’ve never missed an ARM science team meeting.”

In the early 2000s, he and his wife, Jacqueline, a banker, and their son, Mackinley, settled into a house less than a mile from the one Jensen grew up in during the 1970s and ’80s. 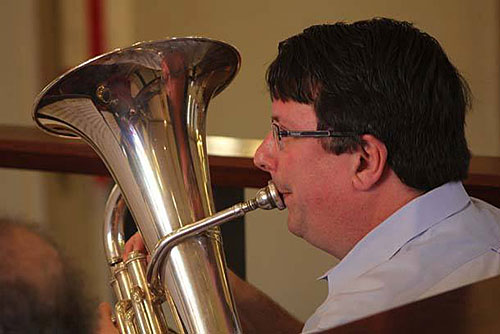 Jensen plays the euphonium during a concert. Photo is courtesy of Jensen.

Ahead: Tracking convection with TRACER

In 2011, he was lead scientist in the Midlatitude Continental Convective Clouds Experiment (MC3E) at ARM’s Southern Great Plains atmospheric observatory, which spans parts of Oklahoma and Kansas. Over six weeks, the mission was to pull in comprehensive data on convective processes in the storm-swept central United States.

Starting in April 2021, Jensen will be a lead scientist again?this time during a yearlong ARM field campaign in the Houston, Texas, area called the TRacking Aerosol Convection interactions ExpeRiment (TRACER). The mission will be to track convective processes in an urban coastal setting, where plumes of regional pollution and onshore sea breezes intersect.

Unlike MC3E, however, TRACER researchers will focus on observing isolated convective clouds by comprehensively targeting the influence aerosols have on cloud systems. Aerosols are liquid and solid particles that influence the formation of clouds. They can spur precipitation and either strengthen or weaken convection.

Because of the focus on aerosol-convection interactions, “TRACER is the next step in deep-convection study,” says Jensen.

One of ARM’s three ARM Mobile Facilities will be in place, along with advanced scanning precipitation radars. These instruments will complement regional meteorological assets and U.S. satellite data. A secondary site will capture background atmospheric conditions that are in a cleaner air-quality state.

In the Houston-Galveston region, storms occur up to 55% of the time year-round and more frequently in the summer months. During TRACER, a four-month summertime intensive operational period is tentatively slated to commence June 1, 2021. 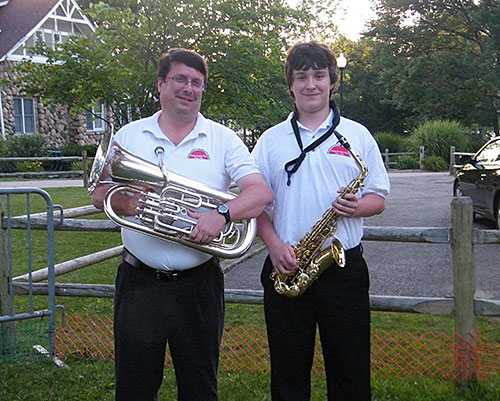 In the summer of 2011, Jensen and his son, Mack, pose near home with their musical instruments. Photo is courtesy of Jensen.

A taste for fieldwork

Periodically over the years, Jensen’s research interests have pivoted to marine boundary layer (MBL) clouds. Low-level decks of marine stratocumulus clouds are the most prevalent on Earth and play a major role in energy balance and boundary layer dynamics. (The boundary layer is where most weather occurs, including severe storms.)

Most recently, for a total of nine months during 2017 and 2018, Jensen participated in ARM’s Aerosol and Cloud Experiments in the Eastern North Atlantic (ACE-ENA) field campaign as part of the campaign weather forecasting team. The goal of ACE-ENA was to fill in knowledge gaps about low marine clouds, which are poorly represented in global earth system models.

Jensen spent five weeks launching radiosondes on the island of Santa Maria in the Azores and came away with a fondness for fieldwork. His first Penn State mentor, boundary-layer and cloud-interactions researcher Bruce Albrecht, led the U.S. portion of the research.

With Albrecht as a mentor, Jensen wrote his 1993 master’s thesis on how the thermodynamic structure of the boundary layer influenced cloud fraction?the spatial prevalence of cloud cover in the sky. He used lidar and ceilometer data from the Azores, California, and Hawaii. 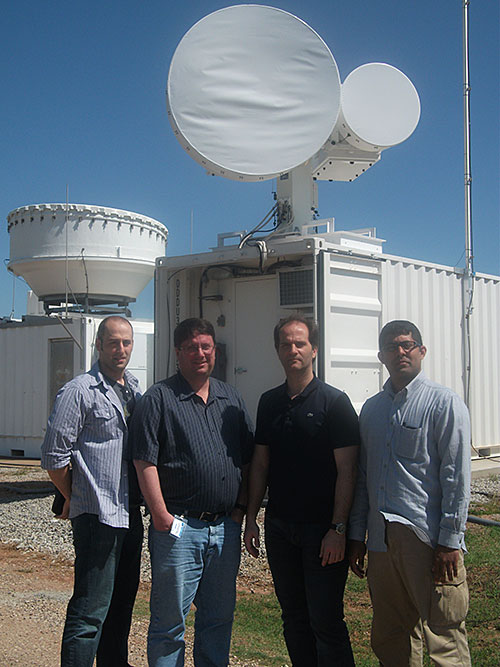 A dissertation on deep convection

By 1995, as a first-year PhD student at Penn State, Jensen swung his sights to deep convection.

In 1996 he spent time quality-checking cloud and radiation data from ARM’s now-shuttered Tropical Western Pacific atmospheric observatory, which commenced operations that year with an inaugural site in Papua New Guinea. It was his first brush with ARM and its data.

Jensen did this work under the guidance of Penn State research associate Jim Mather, who is now ARM’s technical director based at Pacific Northwest National Laboratory in Washington state.

Between his master’s and his PhD, Jensen took a two-year swerve into teaching at a charter high school in Staunton, Virginia. He taught classes in precalculus and calculus, but also ventured into teaching meteorology, computer science, and physics.

“Teaching helped me learn to communicate,” says Jensen—including when he found himself, through a K-12 outreach program, facing an audience of 100 kindergartners. “Teaching people new concepts is hard to do.”

He was not quite in kindergarten when he decided on cloud science as a career (some start that young). But by high school in his native Centerport, New York, a hamlet on Long Island, Jensen was already years into a fascination with math and science. (He also played in the band and ran cross-country and track.)

He excelled in math and science, so “my (high school) guidance counselor said: ‘Thou shalt be an engineer,’” says Jensen, the son of a paralegal mother and a father who worked as a heating, ventilation, and air-conditioning mechanic. It was a line of study he pursued for his first two years at Stony Brook University in New York.

He liked physics and math, but not much else about the engineering curriculum. So, he gave an introductory course in meteorology a try.

It was taught by Robert Cess, a veteran atmospheric scientist. By the end of the semester, says Jensen, “I was hooked,” and he changed his major. 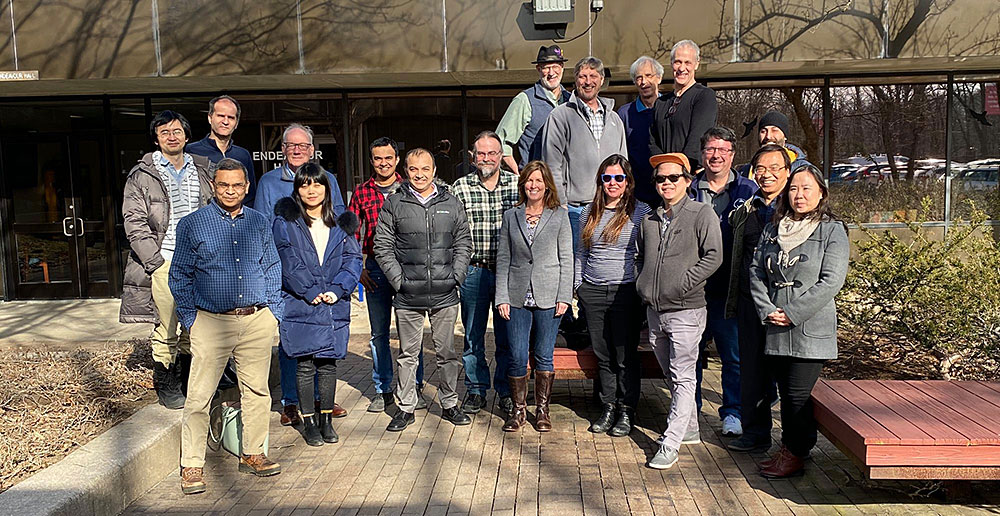 Jensen (second row, second from right) is the laboratory research manager for a Scientific Focus Area (SFA) project on aerosol-cloud interactions. The project involves 22 scientists from Brookhaven (BNL) and Argonne national laboratories. This photo is from a planning retreat for SFA participants at BNL. They were planning a proposal renewal for the research, which is funded by the U.S. Department of Energy's Atmospheric System Research. Photo is courtesy of Sharon Zuhoski, BNL.

Back to the field

“Just to see the clouds I had spent so much of my career studying, to actually see them and experience them, was an invaluable thing for me—and for the science we do.”

From thence flowed all the graduate studies and then teaching in Virginia and then the PhD in 2000.

For the next four years, Jensen was a postdoc (and then research associate) at Columbia University. He worked with Tony Del Genio, a modeler and parameterization developer at NASA’s Manhattan-based Goddard Institute for Space Studies (GISS).

From there, Jensen transitioned to what he called “the BNL family.” His first project at BNL was with newly minted lab scientist Andy Vogelmann and BNL and ARM veteran Mark Miller, who is now at Rutgers University. They studied satellite-based data on marine boundary layer clouds; Jensen and Vogelmann were among co-authors of a signature 2008 paper, with Jensen as lead author.

Among other roles, Jensen is the laboratory research manager for a Scientific Focus Area (SFA) project on aerosol-cloud interactions. The project involves 22 scientists from BNL and Argonne National Laboratory in Illinois. A renewal proposal for its funding has been submitted to DOE’s Atmospheric System Research.

His cloud investigations at BNL got Jensen back into the field, an interest that had lain dormant since the 1990s. After leading MC3E in 2011, Jensen was part of ARM’s 2012–2013 Marine ARM GPCI Investigation of Clouds (MAGIC) field campaign, as well as the user facility’s 2015 Plains Elevated Convection at Night Experiment (PECAN) and ACE-ENA (2017–2018).

For one 10-day, trans-Pacific leg of the shipborne MAGIC campaign, Jensen was the science observer, taking additional measurements and helping ARM staff.

“Just to see the clouds I had spent so much of my career studying,” he says, “to actually see them and experience them, was an invaluable thing for me?and for the science we do.”