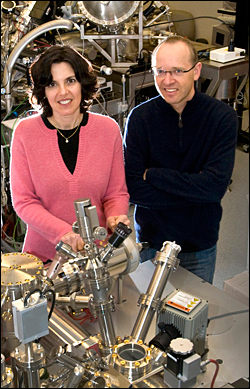 A paper published two years ago in Nature Materials by Eli Sutter and Peter Sutter, from Brookhaven’s Center for Functional Nanomaterials (CFN), and Jan Ingo-Flege, a former CFN postdoc now at Bremen University, Germany, is now the most cited publication in the field of epitaxial graphene — an intriguing form of carbon that’s just a single atom thick. According to Thomson Reuters Essential Science Indicators, the paper has been referenced in scientific articles more than 120 times since it was published in May 2008, making it the highest-cited study in its field.

Graphene is flexible, highly transparent, and has outstanding electrical properties, making it a strong contender for the next generation of computers, digital displays, sensors, and solar cell contacts. The simplest way to produce the material is to peel off single sheets of graphene from graphite — a material consisting of many graphene layers and most commonly found in pencils — with pieces of tape. But this method results in small, jagged flakes that aren’t useful for most applications.

The CFN group was the first to show that metal substrates (in this case, ruthenium) can be used to grow high-quality graphene over very large areas, thousands of times larger than the pieces made with the “Scotch tape” method. 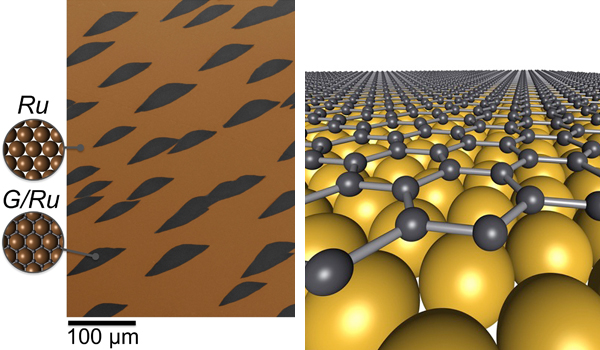 You can read more about the researchers’ influential paper, in their own words, at the ScienceWatch website.