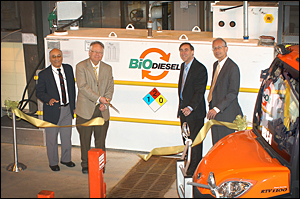 On April 23, Deputy Director for Science and Technology Doon Gibbs and Assistant Laboratory Director for Facilities & Operations Lanny Bates, together with Robert Gordon and Nick Torres of the U. S. Department of Energy’s Brookhaven Site Office, cut a ribbon with golden scissors as a ceremonial gesture opening the new on-site biofuel transfer station. The new station, which will be open 24 hours a day, seven days a week, will be the pit stop for refueling the Lab’s 44 new biofuel Kubotas. Notably orange in color, Kubotas are just one brand of small utility vehicles.

According to Peter Pohlot, the Lab’s Pollution Prevention Coordinator, the use of biofuel is one of many steps towards meeting the goals of President Obama’s executive order to decrease our dependence on foreign oil and increase agency use of renewable energy.

The Kubotas are used by several Lab organizations and can do more than just get people around the site. These particular models can be used off road, which is very helpful for environmental staff who need to conduct water and soil sampling in remote areas of the site. The Kubotas are used by the fire rescue group to travel around the site to conduct routine building checks and fire extinguisher maintenance. They can also be equipped with small plows for snow removal (yes, they are heated!), and can hold more cargo and tools than their counterpart electric utility vehicles. 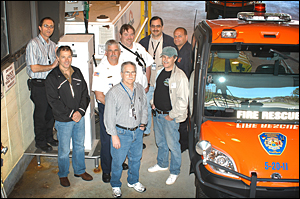 “Bob Gordon and Nick Torres were the biggest crusaders for this project,” said Pohlot. “We are grateful for their support. Without them, the project would not have moved forward. It would be impossible to thank everyone involved, but in particular, Chris Johnson (Facility Operations Office-FM), Bill Chaloupka (Energy & Utilities Division), and Danny Farge (FM) worked hard to make the fuel station meet all the necessary compliances and safety requirements.”

Pohlot also gives accolades to the Central Fabrication shop, in particular John Berry who designed and helped build the fueling platform and the barricades that protect the tank. “They were key to getting the new fuel station fully operational,” he said.

“This new biofuel transfer station is a ‘Cadillac’ system,” said Pohlot. “Continuing to move toward saving energy, reducing dependence on foreign fuel, and decreasing emissions and impact to the environment are certainly reasons for all of us to be proud of this accomplishment.” Next pit stop is E-85.