The UEC Community Service Award is given for outstanding service, innovation, and dedication to users of the NSLS. 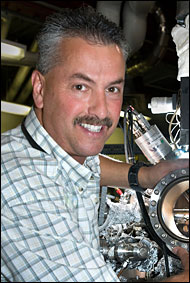 Caruso, a mechanical technician for the NSLS vacuum ultraviolet beamlines, joined Brookhaven Lab in 1981 to work in the ultra-high vacuum group on the ISABELLE project. In 1983, after ISABELLE was terminated, he transferred to the Alternating Gradient Synchrotron. He joined the NSLS vacuum group in 1984, servicing the X-ray, VUV, and Booster rings as well as the Linac. He now works with the Mechanical Technicians group, providing experiment support, performing leak testing, making repairs, and installing upgrades. He also assists with R&D work for NSLS-II. Caruso earned an associate’s degree in science in 1980 from Suffolk Community College and an electronics degree in 1984 from the National Radio Institute of Electronics.

Caruso is being recognized for his great skill in vacuum systems as well as his unfailingly sunny personality. “Mike is very helpful, always smiling and ready to help,” said one user in support of his nomination. “He's got the most consistently cheerful and optimistic outlook I've ever seen in a person,” said another user. 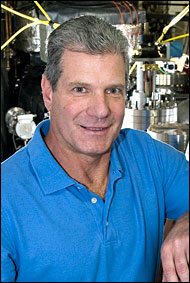 Greene is a mechanical technician for the NSLS x-ray beamlines. After graduating from a special BOCES aircraft mechanic program and working in the field for several years, Greene joined Brookhaven Lab in 1978 – the year ground was broken for the NSLS – as a vacuum technician. He was involved in numerous stages of construction, assembly, and commissioning for the facility’s storage rings, Linac, RF cavities, and beamlines. When NSLS operations began, he was one of the first operations coordinators. In 1986, Greene joined the NSLS instrument development group (now known as the Mechanical Technicians group) as a beamline technician. In this role, he aligns and cuts crystals for monochromators, provides experiment support, and designs, builds, and upgrades NSLS beamlines and equipment.

Greene is being recognized for the breadth of talents and expertise that he brings to the experimental floor. In support of his nomination, one NSLS user asked “What doesn't Rick do? He knows vacuum, crystal, rigging, and probably a bunch of things I have never called on him for.” Another said: “Rick is also very helpful with any technical problem. If you mention it to him, it is for sure that it will be solved.”

Caruso and Greene received $250 gift certificates from the UEC in recognition of their excellent service. Their names also will be engraved on a plaque displayed in the NSLS lobby. 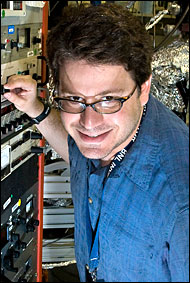 The Julian Baumert Award is given to a researcher who has recently conducted a thesis project that included measurements at the NSLS. It was established in memory of Julian David Baumert, a young Brookhaven physicist who was working on x-ray studies of soft-matter interfaces at the NSLS before he died in June 2006.

First, Rameau had to build a new facility at the NSLS that allows researchers to compare photoemission spectra from both laser-generated ultraviolet light and synchrotron radiation.

“Many experts in the field said it could not be done with sufficient intensity, and certainly not by anyone lacking prior experience with lasers,” said Rameau’s advisor Peter Johnson, Chair of Brookhaven’s Condensed Matter Physics and Materials Science Department. “Jon took on the challenge and succeeded admirably.”

Rameau used the new facility to study high-temperature superconducting cuprates, materials that conduct electricity without resistance and could some day be used in energy-saving applications like high-efficiency transmission lines in the U.S. power grid. By comparing the spectra obtained using synchrotron radiation and laser-based photoemission, Rameau was able to make the first observation of the coupling, or interaction, of valence-based electrons to a low-energy phonon — a vibration of the ions that form the lattice of a superconductor’s crystal.

This study is particularly interesting, Johnson said, because it required the application of the Lucy-Richardson method, a procedure used to reduce the broadening effects associated with the experimental resolution to reveal the fine structure associated with the coupling.

The Brookhaven group applied the same techniques to prove the existence of “pockets” in the Fermi surface of the high-temperature superconducting cuprates. This seminal study, published in Nature, has already been cited 25 times in just 16 months.

The Baumert award was presented May 25 at the 2010 Joint NSLS and CFN Users' Meeting. Rameau received a $500 honorarium and travel arrangements to the Users' Meeting, where he gave a 15-minute presentation on his thesis work.