Fire, Earth, Water, Iron — together, these ancient powers of nature set the mood for adventure: to approach them unwarily can mean danger; to harness them successfully is exciting. 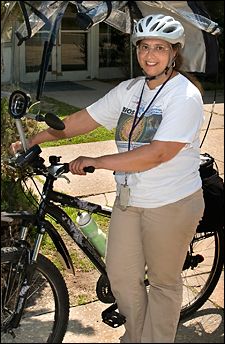 Scientists are harnessing the properties of immense natural powers to capture and learn more about one of the most minute particles ever known: the neutrino. Ghostlike neutrinos pour continuously in billions per second through the earth and everything on it, yet they interact so weakly with all other material that they pass almost without trace.

Already, many years of experiments have yielded great discoveries about the neutrino. For example, there are three types: electron, tau, and muon neutrinos — one for each generation of the lepton family of particles — and they can oscillate, or change from one type to another. Yet deep mysteries remain. What is the mass of the electron neutrino? Could neutrino research shed light on the origin of the matter/anti-matter asymmetry in our Universe? Are there only three generations of leptons?

To learn more, join Mary Bishai of the Physics Department on Wednesday, June 30, as she gives the 458th Brookhaven Lecture to describe the latest adventures in neutrino research. Titled “Fire, Earth, Water, Iron — Harnessing the Elements to Study Nature’s Most Elusive Elementary Particle,” this free talk, which is open to the public, will be given at 4 p.m. in Berkner Hall. Refreshments will be offered before and after the talk. Visitors to the Lab 16 and older must carry a photo I.D.

As Bishai will explain, neutrinos come from many sources, including the fiery heart of the sun. She will describe how in a huge underground body of water in Super-Kamiokande, Japan, scientists proved that neutrinos from cosmic rays change from one type to another. She will also talk about her work with colleagues in ongoing experiments such as MINOS at the Fermi National Accelerator Laboratory in Illinois and the Soudan Mine, Minnesota, Daya Bay in China, and the planned Long Baseline Neutrino Experiment stretching between Fermilab and South Dakota, in which earth, iron and other elements play essential roles.

Bishai, who earned her Ph.D. in physics at Purdue University in 1999, joined the Physics Department in July 2004. Her research interests are in the physics of quark and lepton flavors, particularly the study of neutrino flavor oscillations. Prior to joining BNL, she spent five years as a postdoctoral associate at Fermilab studying the properties of bottom quarks at the Tevatron proton anti-proton collider.

To join the speaker for dinner at a restaurant off site after the talk, contact Deborah Kerr, dkerr@bnl.gov, Ext. 3857.