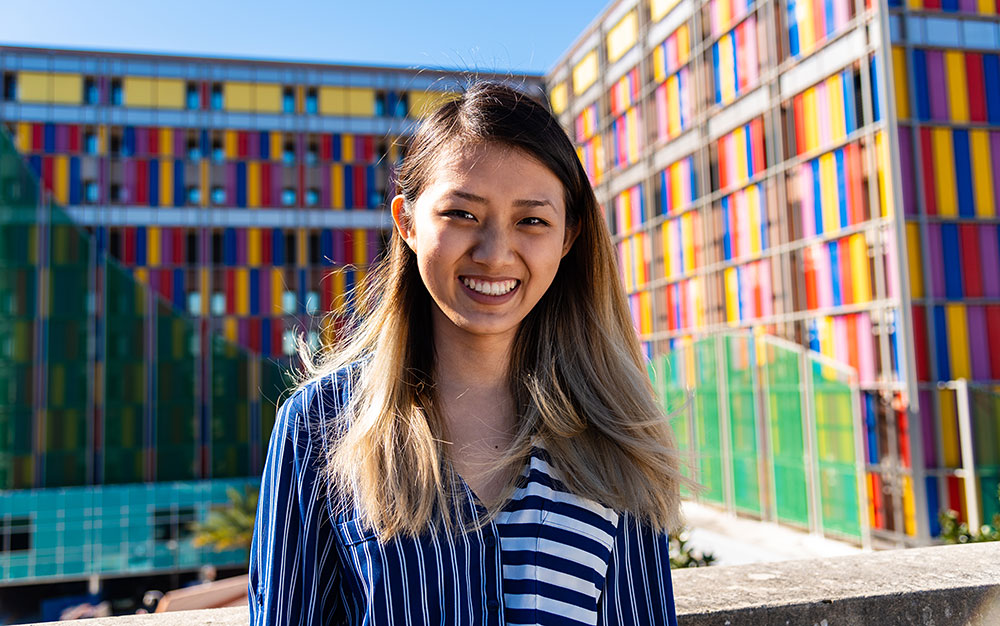 Internships often help students nail down the direction they’d like to take their scientific pursuits. For Wenjie Gong, who just completed her junior year at Harvard University, a first look into theoretical physics last summer as an intern with the U.S. Department of Energy’s (DOE) Brookhaven National Laboratory made her want to dive further into the field.

Gong returns to Brookhaven Lab this summer for her second experience as a virtual DOE Science Undergraduate Laboratory Internships (SULI) participant to continue collaborating with Raju Venugopalan, a senior physicist and Nuclear Theory Group leader. Together, they will explore the connections between nuclear physics theory—which explores the interactions of fundamental particles—and quantum computing.

“I find theoretical physics fascinating as there are so many different avenues to explore and so many different angles from which to approach a problem,” Gong said. “Even though it can be difficult to parse through the technical underpinnings of different physical situations, any progress made is all the more exciting and rewarding.”

Last year, Gong collaborated with Venugopalan on a project exploring possible ways to measure a quantum phenomenon known as “entanglement” in the matter produced at high-energy collisions.

The physical properties of entangled particles are inextricably linked, even when the particles are separated by a great distance. Albert Einstein referred to entanglement as “spooky action at distance.”

Studying this phenomenon is an important part of setting up long-distance quantum computing networks—the topic of many of the experiments at Co-design Center for Quantum Advantage (C2QA). The center led by Brookhaven Lab is one of five National Quantum Information Science Research Centers and applies quantum principles to materials, devices and software co-design efforts to lay the foundation for a new generation of quantum computers.

“Usually, entanglement requires very precise measurements that are found in optics laboratories, but we wanted to look at how we could understand entanglement in high-energy particle collisions, which have much less of a controlled environment,” Gong said.

Venugopalan said the motivation behind thinking of ways to detect entanglement in high-energy collisions is two-fold, first asking the question: “Can we think of experimental measures in collider experiments that have comparable ability to extract quantum action-at-a distance just as the carefully designed tabletop experiments?”

“That would be interesting in itself because one might be inclined to think it unlikely,” he said.

Venugopalan said scientists have identified sub-atomic particle correlations of so-called Lambda hyperons, which have particular properties that may allow such an experiment.  Those experiments would open up the question of whether entanglement persists if scientists change the conditions of the collisions, he said.

“If we made the collisions more violent, say, by increasing the number of particles produced, would the quantum action-at-a-distance correlation go away, just as you, and I, as macroscopic quantum states, don't exhibit any spooky action-at-a-distance nonsense,” Venugopalan said. “When does such a quantum-to-classical transition take place?”

In addition, can such measurements teach us about the nature of the interactions of the building blocks of matter–quarks and gluons?

There may be more questions than answers at this stage, “but these questions force us to refine our experimental and computational tools,” Venugopalan said.

Gong will continue collaborating with Venugopalan to develop the project on entanglement this summer. She may also start a new project exploring quirky features of soft particles in the quantum theory of electromagnetism that also apply to the strong force of nuclear physics, Venugopalan said. While her internship is virtual again this year, she said she learned last summer that collaborating remotely can be productive and rewarding.

“Wenjie is the real deal,” Venugopalan said. “Even as a rising junior, she was functioning at the level of a postdoc. It’s a great joy to exchange ‘crazy’ ideas with her and work out the consequences. She shows great promise for an outstanding career in theoretical physics.”

Others have noticed Gong’s scientific talent. She was recently honored with a Barry M. Goldwater Scholarship. The prestigious award supports impressive undergraduates who plan to pursue a PhD in the natural sciences, mathematics, and engineering.

“I feel really honored and also very grateful to Raju, the DOE, and Brookhaven for providing me the opportunity to do this research—which I wrote about in my Goldwater essay,” Gong said.

Gong said she’s looking forward to applying concepts from courses she took at Harvard over the past year, including quantum field theory, which she found challenging but also rewarding.

Gong’s interest in physics started when she took Advanced Placement (AP) Physics in high school. The topic drew her in because it requires a way of thinking that’s different compared to other sciences because it explores the laws governing the motion of matter and existence, she said.

In addition to further exploring high energy theoretical physics research, Gong said she hopes to one day teach as a university professor. She’s currently a peer tutor at Harvard.

“I love teaching physics,” she said. “It's really cool to see the ‘Ah-ha!’ moment when students go from not really understanding something to grasping a concept.”

The SULI program at Brookhaven is managed by the Lab’s Office of Educational Programs and sponsored by DOE’s Office of Workforce Development for Teachers and Scientists (WDTS) within the Department’s Office of Science.