This news release, originally issued by the University of Virginia, describes the development of a new 3d-printable soft material that matches the mechanical properties of vocal cords. The researcher team collaborated with Brookhaven Lab scientists Guillaume Freychet and Mikhail Zhernenkov  to reveal the inner makeup of the printed material. By using the Soft Matter Interfaces (SMI) beamline at the National Synchrotron Light Source II (NSLS-II), the team was able to investigate the sample without damaging the samples. NSLS-II is a U.S. Department of Energy (DOE) Office of Science User Facility located at DOE’s Brookhaven National Laboratory that offers a comprehensive suite of scattering and diffraction beamlines for research on new materials. This article has also been chosen as the Editor's Choice in Science Vol 372. For more information on Brookhaven’s role in this research, please contact: Cara Laasch, 631-344-8458, laasch@bnl.gov.

By Karen Walker, University of Virginia 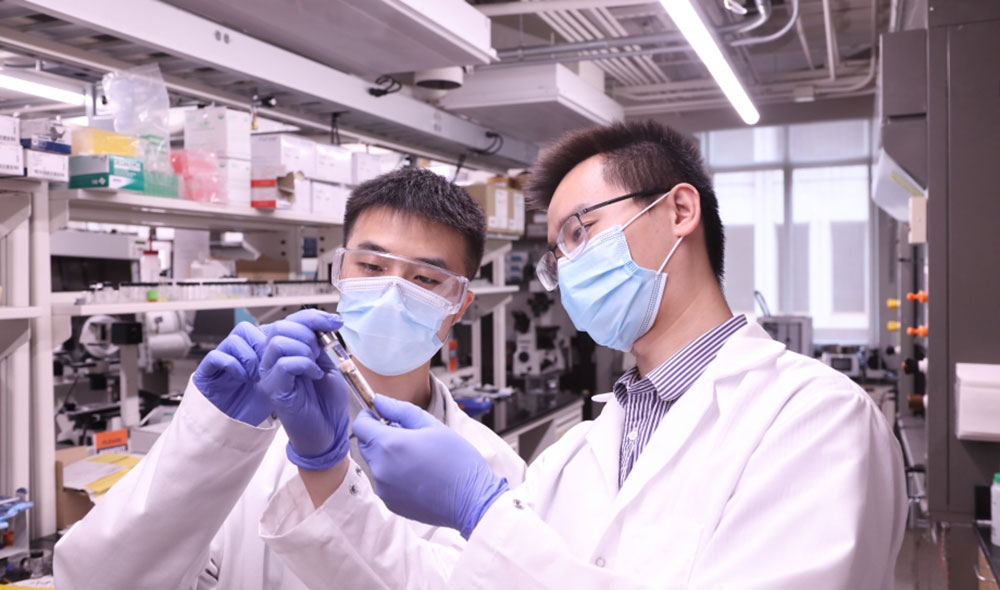 “I think you’re on mute.” This was the most-used phrase of 2020, according to Human Resources Online. Emblazoned on T-shirts and embossed on coffee-mugs, we used the meme to make fun of ourselves while learning video-conferencing tools like Zoom and Microsoft’s Teams.

But for the more than 7 million Americans who suffer from vocal disorders, not being heard is a serious matter. Many people who have normal speaking skills have great difficulty communicating when their voice box, the larynx, fails. This can occur if the vocal cords, the two bands of smooth muscle tissue in the larynx, suffer damage from an accident, surgical procedure, viral infection or cancer.

There is no replacement for the vocal cords when the damage is severe or permanent. Now, a team of materials scientists at the University of Virginia School of Engineering has developed a soft material with promise of new treatments in the future. Their novel soft material, called an elastomer, is very stretchable and 10,000 times softer than a conventional rubber, matching the mechanical properties of vocal cords. The elastomer can be 3D printed for use in health care. 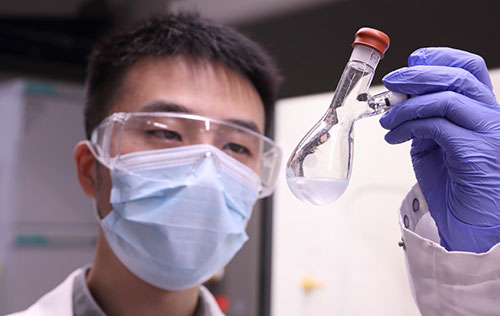 Liheng Cai, assistant professor of materials science and engineering and chemical engineering, oversees this research. Cai also holds a courtesy appointment in biomedical engineering and leads the Soft Biomatter Lab at UVA. Cai’s lab works to understand and control the interactions between active soft materials, such as responsive polymers or biological gels, and living systems, such as bacteria or cells and tissues in the human body.

The team developed a novel strategy to make such 3D-printable soft elastomers. They used a new type of polymer with a special architecture reminiscent of the bottlebrush for cleaning small glassware, but on the molecular scale. The bottlebrush-like polymer, when linked to form a network, enables extremely soft materials mimicking biological tissues.

Cai began to prove the potential of bottlebrush polymers as a postdoctoral fellow at Harvard University’s John H. Paulson School of Engineering and Applied Sciences. Cai’s collaborative engineering of soft yet ‘dry’ rubber was published in Advanced Materials. 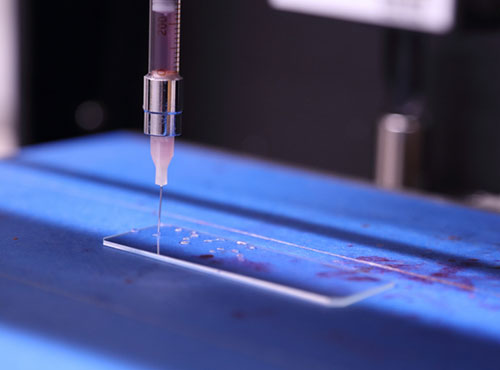 The ink is deposited on a substrate. Together, Nian and Zhu are developing a fluid, end-to-end work flow from materials synthesis to manufacture to application. Image credit: University of Virginia

Now, Cai and his team have developed a new way to use strong – yet reversible depending upon the temperature – associations to crosslink bottlebrush-like polymers to form a rubber. The idea is to use chemical synthesis to append one glassy polymer to each end of a bottlebrush-like polymer. Such glassy polymers spontaneously self-organize to form nanoscale spheres that are the same as that of plastic water bottles. They are rigid at room temperature but melt at high temperature; this can be exploited to 3D print soft structures.

Cai credits Nian for developing the chemistry for synthesizing bottlebrush polymers with precisely controlled architecture to prescribe the softness and stretchability of elastomers. The elastomer can be used as an ink in a 3D printer to create a geometric shape with the qualities of rubber. 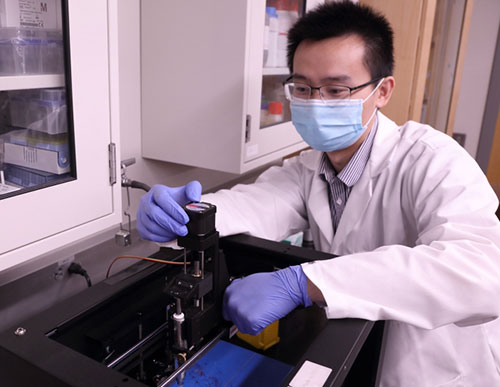 The 3D printer itself is about the size of a dorm room refrigerator. Zhu custom-designed the nozzle for the extruder system that shoots the materials in a prescribed amount in a 3D space, guided by a computer program specific to the object desired.

Nian earned his Ph.D. in chemistry from UVA in 2018, and joined Cai’s Soft Biomatter lab as a post-doc. “Dr. Cai’s group gives me an opportunity to expand my research from classical chemistry to materials development; we’re inventing a lot of cool materials with special mechanical, electrical and optical properties,” Nian said.

What’s cool about the team’s soft material is its ability to self-organize and assemble as each drop is deposited. When the silicone-based material is first loaded into the ink cartridge, it has the consistency of honey, half solid and half liquid. As printing progresses, the solvent binds the layers and then evaporates to seamlessly build the object. Moreover, you can re-do it if you make any mistakes, as the material is 100% reprocessable and recyclable.

“The SMI beamline is ideally suited for this type of research due to its high x-ray beam intensity, excellent energy and momentum transfer tunability, and very low background. Working with Cai’s team, we were able to see how the bottlebrush-like polymer assemble into a cross-linked network,” Zhernenkov said. 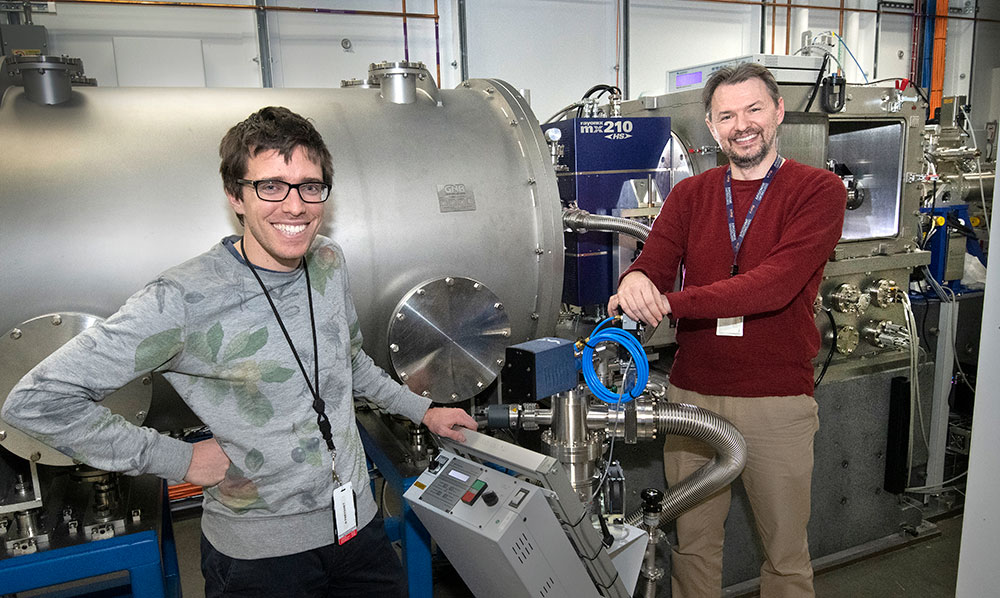 Assistant professor Liheng Cai from the University of Virginia collaborated with NSLS-II scientists Guillaume Freychet (left) and Mikhail Zhernenkov (right) to investigate inner makeup of the printed materials at the Soft Matter Interface (SMI) beamline. (This photo was taken in 2019.)

Cai estimates that the team is two or three years away from seeing their elastomers in practical use, an accelerated pace enabled by the team’s 3D-printing method. Sometimes called additive manufacturing, 3D printing is a research strength of UVA’s Department of Materials Science and Engineering; researchers in this arena seek to understand the physics underlying additive manufacturing processes as they create new material systems.

Improving health is just one motivator for their research.

“We believe our findings will stimulate the development of new soft materials as inks for 3D printing, which can be the basis for a broad range of adaptive devices and structures such as sensors, stretchable electronics and soft robotics,” Cai said.

A National Science Foundation CAREER award and ACS Petroleum Research Fund Doctoral New Investigator award support Cai’s research on the super rubber he envisions for biomedical implants and tissue engineering, among other applications. His research team is continuing to work on printability to produce objects that are closer to their desired shape.