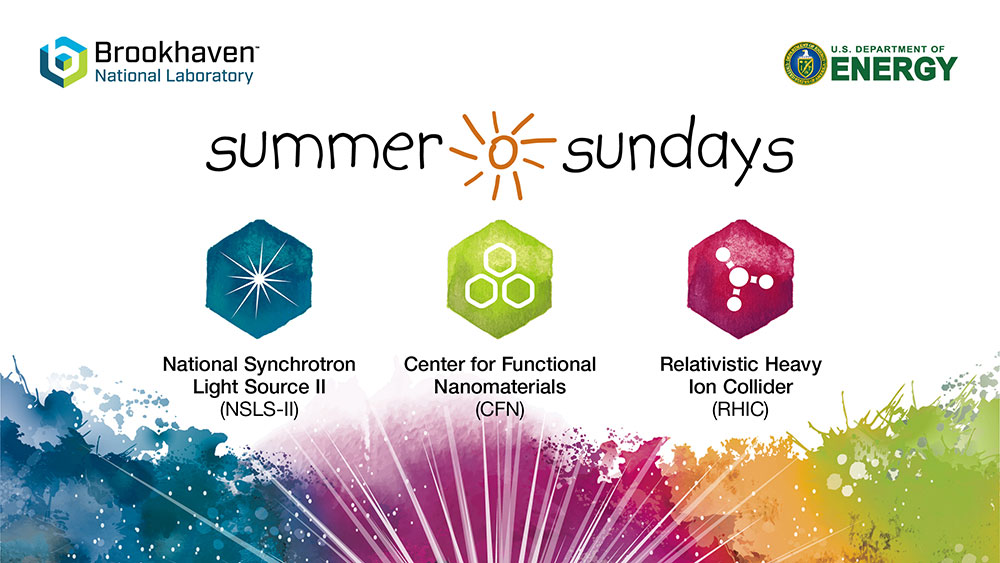 Following the success of Brookhaven’s virtual Summer Sundays program in 2020 and to continue limiting the spread of COVID-19, the Lab is bringing back its online Summer Sunday program for 2021. Over three Sundays this summer, Brookhaven will host a series of live, virtual events for people of all ages. Each event will feature a guided tour of a Brookhaven Lab facility and live Q&A sessions with a panel of scientists.

Tune in to get an up-close look at some of the “beamlines” where scientists use ultrabright x-ray light to see the atomic structure of batteries, proteins, and more. Viewers will have the opportunity to pose questions to NSLS-II scientists about each beamline on the tour and all of the research conducted at NSLS-II. Watch on Twitter, Facebook, or YouTube.

Join Brookhaven scientists as they explore the physics of particle colliders, including RHIC and the upcoming Electron-Ion Collider (EIC). Get a behind-the-scenes look at RHIC’s operations, then scientists for a Q&A session where they’ll take viewers’ questions about RHIC and the EIC. Watch on Twitter, Facebook, or YouTube.

Investigate our world at the nanoscale with CFN, where scientists will show viewers the sophisticated microscopes and research tools they use to observe ultrasmall science. Viewers will have the opportunity to pose questions to CFN scientists about each scientific instrument on the tour and all of the research conducted at CFN. Watch on Twitter, Facebook, or YouTube.

How to watch and ask questions

Each of the Lab’s live Summer Sundays events will be streamed to Twitter, Facebook, and YouTube. At the time of the event, the live stream will be pinned to the top of Brookhaven’s profile on each platform. You do not need to have a Twitter, Facebook, or Google account to watch the stream.

Viewers are encouraged to submit their questions for the Q&A segment in advance through the Lab’s social media accounts or by sending an email to LiveEvents@bnl.gov. Live questions will also be accepted during the Q&A through the chat functions on all streaming platforms mentioned above.