The University of Delaware (UD) published the following story spotlighting doctoral student Mark LaFollette, who recently received the U.S. Department of Energy (DOE) Office of Science Graduate Student Research Program Award. With this funding, LaFollette will conduct research on surface catalysis at the Center for Functional Nanomaterials (CFN), a DOE Office of Science User Facility at Brookhaven National Laboratory. Working with CFN materials scientist Anibal Boscoboinik, LaFollette will study the ability of two-dimensional (2-D) zeolites—porous catalysts with well-defined but few active sites on the surface—to catalyze reactions. LaFollette will see if these 2-D materials can catalyze a particular reaction in which methanol is converted into larger and more valuable hydrocarbons to prepare fuels and industrially useful chemicals. To aid in these studies, LaFollette will use a recirculation reactor, which he began building in 2019 as a Brookhaven Lab intern with Boscoboinik and CFN chemist Samuel Tenney. This reactor allows scientists to study low-surface-area materials, such as the 2-D model zeolite systems described above. LaFollette’s research at the CFN will complement his doctoral work at UD, where he has been working as part of the Catalysis Center for Energy Innovation, a DOE Energy Frontier Research Center. CFN media contact: Ariana Manglaviti, 631-344-2347, amanglaviti@bnl.gov. UD media contact: Tracey Bryant, 302-831-8185, tbryant@udel.edu.

Probing the Powers of Zeolites

By Tracey Bryant, University of Delaware 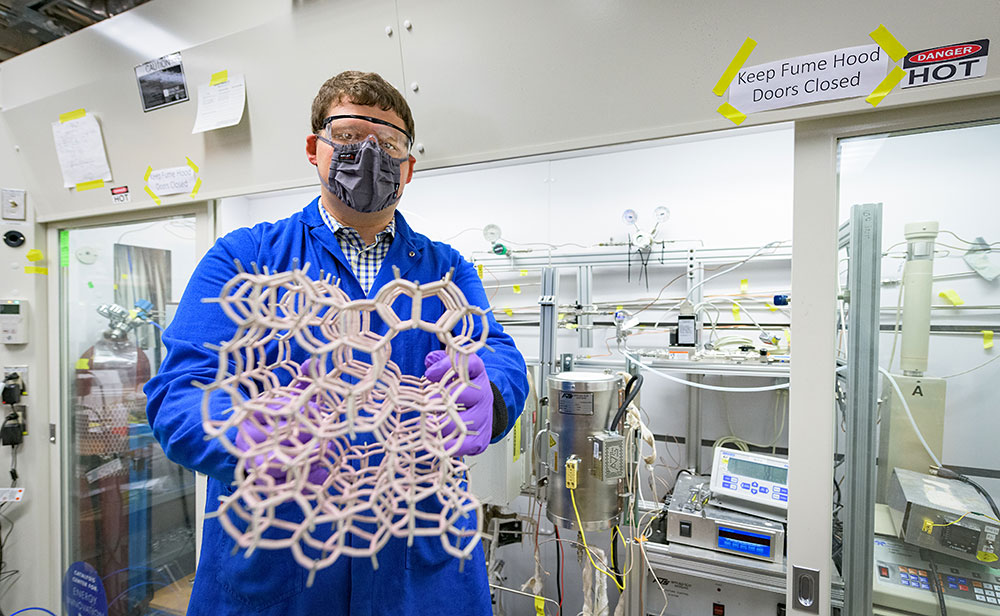 The University of Delaware's Mark LaFollette, a doctoral student in chemical and biomolecular engineering at UD, displays a large structural model of a zeolite. The honeycomb-like structure allows zeolites to act as a "molecular sieve." Image credit: Evan Krape

Zeolites (pronounced “zee-uh-lites”) might not turn up in your everyday conversation, but they are in use all around you — from replacing phosphates in powdered laundry detergents to reducing air pollution from trucks.

As part of his research, Mark LaFollette, a doctoral student in chemical and biomolecular engineering at the University of Delaware, has been running experiments with zeolites in UD’s Colburn Lab. He wants to see if a special kind of this porous material can unlock new pathways to cleaner, greener chemical reactions.

A typical zeolite is made up primarily of aluminum, oxygen and silicon atoms linked together, which creates a three-dimensional (3D) cage-like structure that acts like a sieve on a molecular scale with the ability to sort molecules of a particular size. The inclusion of aluminum creates a charge imbalance (an anion), which is balanced by either metal ions or hydrogen ions — the active sites that propel reactions to occur. 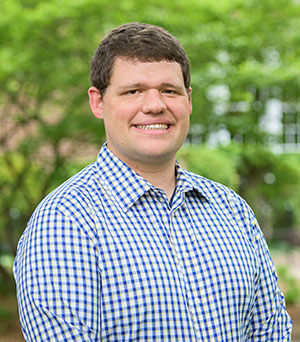 Mark LaFollette, a doctoral student in chemical and biomolecular engineering, has won a prestigious award from the U.S. Department of Energy Office of Science that will support his research at Brookhaven National Lab. Image credit: Evan Krape

“Zeolites are commonly used in industry as catalysts with their acidity, structure and the size of their pores making them highly active and selective catalysts,” said LaFollette, who is from Olathe, Kansas.

Catalysts spur chemical reactions, making them go faster or occur at a lower temperature. LaFollette’s materials are special because instead of aluminum, other metals, such as iron, are placed into the framework. Iron zeolites are similar to their aluminum counterparts except for having weaker acid sites. These sites allow the catalyst to be more selective to desired products, but a drawback is that reactions do not occur as quickly.

LaFollette’s research goal is to have the more selective iron zeolite catalyst only perform a subset of the various reactions involved in methanol to hydrocarbon (MTH) chemistry. MTH is a way of converting methanol, a single carbon molecule derived from natural gas or biomass, into larger and more valuable hydrocarbons to prepare fuels and chemicals. One of the goals of his work is to get the reactivity of iron-based zeolites to be more similar to aluminum zeolites, which are the most used catalysts in industry.

In recognition of LaFollette’s promising work, the U.S. Department of Energy (DOE) recently selected him to receive their Office of Science Graduate Student Research (SCGSR) program award. He was one of 78 graduate students from 26 states to win this competitive funding that will advance his doctoral research and training through access to state-of-the-art facilities and resources at DOE’s National Laboratories.

“DOE has long been where the nation turns for scientific solutions to complex challenges, and now more than ever we need to invest in a diverse, talented pipeline of scientists, engineers and entrepreneurs who can continue this legacy of excellence,” said U.S. Secretary of Energy Jennifer M. Granholm.  “I’m thrilled that these outstanding students will help us tackle mission-critical research at our labs, and I can’t wait to see what their futures hold.”

The SCGSR award is supporting LaFollette’s travel and residency at Brookhaven National Laboratory (BNL) on Long Island, New York. Starting in July, he began an eight-month program working with Dr. J. Anibal Boscoboinik, a materials scientist and expert on zeolites at Brookhaven’s Center for Functional Nanomaterials. Boscoboinik has experience working with a “model” zeolite system consisting of a two-dimensional (2D) structure with the acid sites exposed to the surface, which contrasts with a traditional zeolite with a 3D structure and the active acid sites located within the interior of the structure. 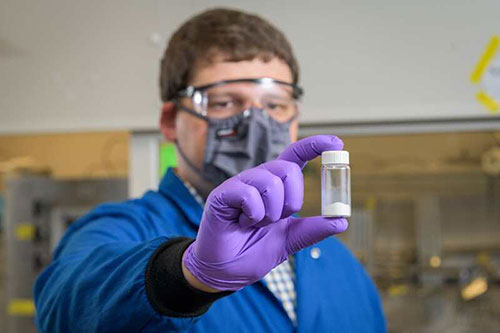 These “model” zeolites have been shown to have similar properties to traditional zeolites, but studying their ability to perform catalyzed reactions is difficult due to the low number of active sites. LaFollette will help develop a unique recirculation reactor, which he worked on as an intern at BNL in 2019. This reactor will allow researchers to investigate catalysts that have very well defined, but very few active sites. Additionally, he will work to apply these 2D materials to the MTH reaction, as a complement to his previous work at UD.

LaFollette already knows he wants to go into industry to help develop new and better catalytic technology. He has had valuable experiences already — including undergraduate research in converting algae into biofuel while at the University of Kansas, then an internship at the National Institute of Standards and Technology (NIST) in Boulder, Colorado, where he worked on fuel analysis for new fuel blends, putting ethanol and biodiesel into diesel fuel. He was a process control intern at CVR Energy Inc. working in the automation group of Coffeyville Resources Refinery in Coffeyville, Kansas. While there, he performed a gap analysis of the control system instruments for the boilers of the refinery and issued recommendations to improve the reliability of the equipment.

At UD, he is working with his adviser, Raul Lobo, Claire D. LeClaire Professor of Chemical Engineering, as part of the Catalysis Center for Energy Innovation, a DOE Energy Frontier Research Center.

“Coming up with new technologies and solving problems really appeals to me,” said LaFollette, who comes from a strong family of engineers. His dad is an electrical engineer, and his two older sisters are both chemical engineers.

Having been at BNL for an internship recently, LaFollette looks forward to returning now to pursue research critical to his dissertation.

“I’m honored to have been selected and I can’t wait to get started,” he said. “Ultimately, I hope my research will help pave the way to a greater understanding of the surfaces of catalysts.”