The following news release was originally issued by Stony Brook University. This research was conducted in part at three scientific facilities located at the U.S. Department of Energy’s (DOE) Brookhaven National Laboratory: the Scientific Data and Computing Center, the National Synchrotron Light Source II (NSLS-II), and the Center for Functional Nanomaterials (CFN). NSLS-II and CFN are DOE Office of Science user facilities. For more information on Brookhaven’s role in this research, contact Stephanie Kossman (skossman@bnl.gov, 631-344-8671). 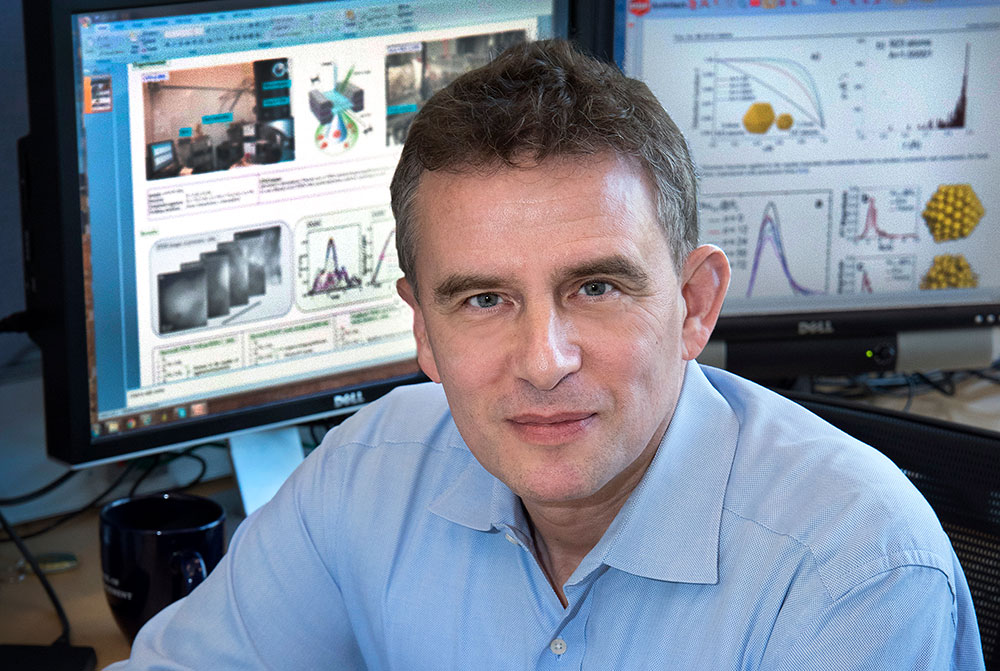 Research done by a team led by Stony Brook University Professor Anatoly Frenkel of the Department of Materials Science and Chemical Engineering in the College of Engineering and Applied Sciences is featured in a new article in Nature Communications that reports a solution of a longstanding problem in catalysis science: solving the active site structure in bimetallic catalysts at the atomic level.

The article, “Decoding Reactive Structures in Dilute Alloy Catalysts,” showcases the work done by a collaborative team from the Center for Integrated Mesoscale Architectures for Sustainable Catalysis, an Energy Frontier Research Center funded by the Department of Energy. The team investigated a catalyst containing a low concentration (four and eight atomic percents) of Palladium atoms mixed with the majority of Gold atoms in nanoparticles approximately five nanometers in diameter. This class of catalyst is potentially very promising because it utilizes a minimal amount of precious metal and is highly active for many chemical reactions.

The team, led by Frenkel and Harvard University Professor Boris Kozinsky, developed a new approach for solving the structure of active sites containing just a few (from one to three) Pd atoms. The objective was to perform x-ray experiments at the National Synchrotron Light Source-II (QAS beamline) and measure catalytic activity of the Pd-Au catalyst in the same conditions, so that the differences in the x-ray spectra and the differences in the activity could be related to each other. 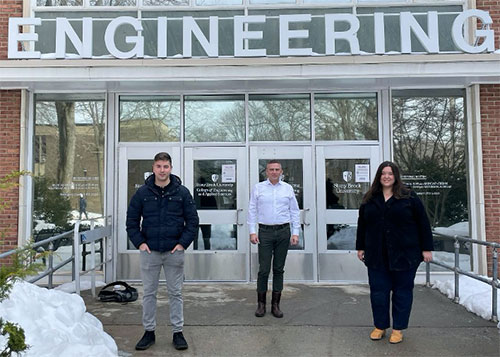 Because the details of Pd atom arrangement were “hidden” in the x-ray spectra, a different tool was needed to “decode” the spectra and obtain the structure of Pd atomic ensembles. The researchers developed a novel, machine learning assisted approach at Stony Brook University and Brookhaven National Laboratory, where Frenkel holds a joint appointment.

“Three-dimensional structure and composition of the active species containing from one to three atoms cannot be determined directly by imaging because the experimental tools available to us do not provide sufficient resolution,” said Frenkel. “Instead, we trained an artificial neural network to find the attributes of such a structure (the number of bonds and their types) from the x-ray spectrum that is sensitive to them.”

“It’s easy for a large collaboration to work independently on a problem from many different angles and then struggle to unify the pieces. Our research team worked first to find a property that linked our respective techniques. In this case, it was atomic structure. We found a way to co-refine a structure model with input from experimental characterization and theoretical reaction modeling, where both riff off each other in a feedback loop,” said Nicholas Marcella, a recent PhD from Stony Brook’s Department of Materials Science and Chemical Engineering (MSCE), a postdoc at University of Illinois, stationed in Frenkel’s group at Brookhaven National Laboratory and the first author of the article.

The Stony Brook team included Marcella and Anna Plonka, a research scientist in MSCE, who share the first authorship, and Frenkel, the article’s lead author. Other authors included faculty and students from Harvard, Penn, Columbia, UCLA and Florida.

Said Plonka: “We wanted to use experimental activation energy measurements as an anchor between various theoretical methods which allowed us to tie together all the results from our respective techniques.”

Rational catalyst design is a long-standing goal toward achieving more energy-efficient and sustainable catalytic processes that range from manufacturing of materials to environmental protection to the pharmaceutical industry. This goal remains elusive because atomic-level knowledge of the active sites is required to understand the very mechanism of catalysis.