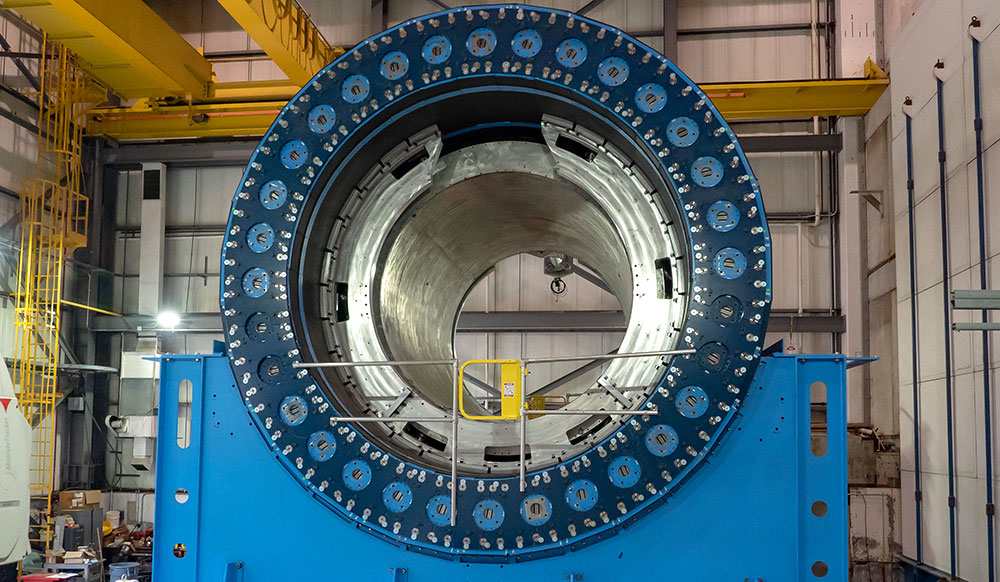 Crews carrying out the ongoing sPHENIX detector upgrade at the U.S. Department of Energy’s Brookhaven National Laboratory pulled off an engineering feat to successfully install the final piece of the detector’s outer hadronic calorimeter.

sPHENIX is an upgrade to the PHENIX experiment at the Lab’s Relativistic Heavy Ion Collider (RHIC), a DOE Office of Science user facility for nuclear physics research. The project will significantly enhance scientists’ ability to learn about quark-gluon plasma (QGP), an exotic form of nuclear matter created in heavy ion collisions. To that end, the hadronic calorimeter will measure the energy of hadrons, which are particles made of quarks and gluons.

The 15-ton, 20-foot-long piece installed on February 28 is the last of 32 outer hadronic calorimeter sectors that surround a 20-ton cylindrical solenoid superconducting magnet like panels of a massive barrel. Much like a classic arch, the final keystone sector at the top of the calorimeter barrel allows the structure to be self-supporting and stable by the force of gravity.

“This assembly required a huge amount of precision machining and creative designs from our engineers and clever installation techniques by our technicians,” said Ed O’Brien, the sPHENIX project director. “We have a great team of scientists, engineers, and technicians helping us make this happen. It’s amazing to see how this complex idea comes together and becomes real.” 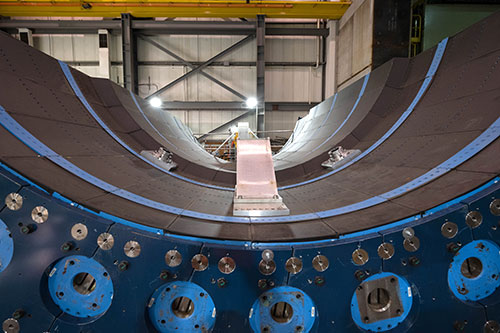 A closer look at the lower hadronic calorimeter sectors

Every move was meticulously planned and reviewed over the last several years, from design to installation, O’Brien said. Once crews installed the lower calorimeter sectors last year, they carefully placed the 20-ton magnet on top, then continued adding the remaining sectors.

This milestone sets up the sPHENIX team for a “marathon” of 2022 assembly activities still needed to prepare the detector to begin collecting data the following year.

“We’re about five miles into running a marathon this summer,” said Brookhaven Lab physicist David Morrison, co-spokesperson for sPHENIX. “It’s going to be one installation after another of remaining components that will go inside of the [superconducting magnet]. So, this is a major, major milestone.”

Remaining detector components are being built or tested at Brookhaven and beyond. Upcoming installations include an inner hadronic calorimeter, silicon detectors, a Time Projection Chamber, and a bevy of sophisticated electronics.

“It’s very exciting to see how sPHENIX, a very large and complex upgrade, built with state of the art technologies for collider detectors, is coming together,” Maria Chamizo-Llatas, Deputy Associate Laboratory Director for strategic planning of future research programs in the Nuclear and Particle Physics Directorate at Brookhaven Lab. “The next months will be extremely busy finalizing the construction and installation of all sub-systems to be ready to register the first collision in 2023.”

The sPHENIX upgrade is a large-scale effort that includes 80 universities and labs from 14 countries and close to 400 collaborators.

“Many institutes and universities from U.S. and abroad, as well as different organizations within Brookhaven, have participated in this endeavor and are an integral part of the success of sPHENIX,” said Gunther Roland, co-spokesperson for sPHENIX and a physicist at the Massachusetts Institute of Technology.

RHIC is a DOE Office of Science User Facility.