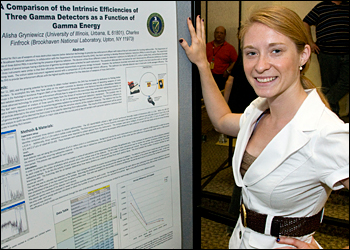 When Alisha Gryniewicz visited New York City this summer, she sometimes asked members of the New York Police Department (NYPD) if they were carrying personal radiation detectors (PRDs). Why the inquiries? Simple: Gryniewicz likes to see her handiwork in action.

Gryniewicz spent her summer in Brookhaven National Laboratory’s Student Undergraduate Laboratory Internship (SULI) supplemental program, assisting BNL technical specialists in checking and calibrating PRDs as part of the “Securing the Cities” contract between Brookhaven’s Department of Nonproliferation and National Security and the NYPD.

If many members of the police force carry PRDs, they provide “defense in depth” that essentially blankets the city with detectors, leading to quick identification of illicit radiation.

Under the supervision of Brookhaven employees Carl Czajkowki and Paul Zahra, Gryniewicz worked with the Radiation Calibration Facility Annex in Building 348, exposing the detectors to different levels of radioactive isotopes and checking that they registered the correct level to within a margin of error specified by American National Standards Institute (ANSI) guidelines.

In addition, Gryniewicz explored alternatives to the isotope helium-3 (He-3) for use in neutron detectors. A shortage of He-3, coupled with increased demand for better neutron detectors, has created a commercial need for alternative ways to identify these man-made particles.

Gryniewicz plans to become an engineer, and her summer internship helped her gain valuable experience.

“Brookhaven is one of the most prestigious labs in the U.S., so I figured it was an excellent chance for me to get experience in engineering,” she said.

In the fall, Gryniewicz will begin her senior year at the University of Illinois at Urbana-Champaign.