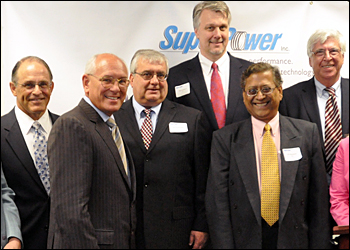 Brookhaven National Laboratory Director Sam Aronson joined elected officials and representatives from the Department of Energy and several collaborating institutions for the August 31 announcement of a $4.25 million grant from the American Recovery and Reinvestment Act to fund superconducting magnet energy storage (SMES) research. The grant was awarded through the Department of Energy’s Advanced Research Projects Agency-Energy (ARPA-E), and will be matched with $1 million from the collaborating institutions for a total of $5.25 million. 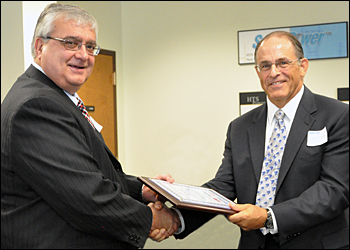 The grant funds work on an advanced superconducting magnetic energy storage system, which can store energy in the magnetic field of a coil made of superconducting wire. Brookhaven, with years of experience in producing superconducting magnets as well as studying the first and second generation of high-temperature superconducting (HTS) wire, will design, build and test the magnet system. Brookhaven, SuperPower and the University of Houston, where SuperPower conducts its research and development, will develop a new-generation HTS wire. The fourth partner in the collaboration, ABB, Inc. of Cary, NC, will create the electronics interface that will control the flow of energy from the coil to the grid.

Speakers at the event and the press conference that followed stressed the urgency of the project, which could have a significant impact on how electricity is stored and delivered in the future. Developing affordable, large-scale energy storage systems would be a game-changing advance for the U.S. electrical grid. In particular, energy storage will be crucial in enabling the widespread use of two key renewable energy sources: wind and solar power. SMES systems use magnetic fields in superconducting coils to store energy with near-zero energy loss, and have instantaneous dynamic response and nearly infinite cycle life. Aronson noted that Brookhaven will soon be home to the largest solar power array in the northeastern United States, and that the facility could be an ideal venue to test the effectiveness of the new technology.