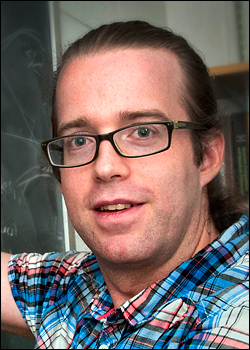 Every time we gaze up at the night sky, we look into the past. Even the moon, about 240,000 miles from Earth, is far enough away that by the time its light reaches us, we see the moon not as it is, but as it was a few seconds ago.

In fact, the history of the entire universe can be read this way. Just ask Brookhaven cosmologist Erin Sheldon.

“I like to explain stuff like this — the big picture questions of cosmology — much more than the technical things,” Sheldon said. “Explaining cosmology’s big questions reminds me of why I’m doing this work.”

Sheldon came to the Laboratory in September 2008, the first hire for the nascent cosmology group that will ultimately interpret data from the proposed Large Synoptic Survey Telescope (LSST).

From there he pursued postdoctoral research at the University of Chicago’s Kavli Institute and New York University. He has worked with the Sloan Digital Sky Survey (SDSS), and Dark Energy Survey (DES), ground-based telescope surveys designed to take digital images of the northern and southern skies. 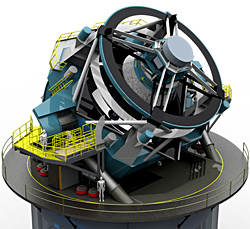 A 2010 rendering of the LSST (Image credit: LSST Corporation / NOAO)

Sheldon arrived at Brookhaven as an independent member of the DES. Since his arrival, the Brookhaven cosmology group has become involved in the current SDSS, contributing to both the technical components and data analysis.

Brookhaven is also a leader in developing the LSST telescope, which will survey the night sky at a rate roughly 100 times greater than any existing telescope. Last month, the Decadal Survey, a panel that prioritizes research in astrophysics, named the project the top priority in ground-based astrophysics research.

Cosmologists use the data obtained from these surveys to piece together the story of the cosmos. Through what Sheldon refers to as “computationally intensive” methods, cosmologists glean information about different bodies in the universe such as their distance from Earth, and when in the past they are being imaged.

Sheldon, for example, works with a technique called gravitational lensing, to study the location and mass of one of physics’ great mysteries, dark matter. No one can see dark matter, and if it is made up of elementary particles, these particles behave in unusual ways that make it difficult to detect them.

Yet not only is there dark matter in the universe, it’s massive and abundant. Sheldon and other cosmologists study this mysterious mass to garner clues for characterizing dark matter.

But that’s not the only dark mystery for cosmologists.

For billions of years, the rate of the universe’s expansion was slowing, an effect attributed to the inward tug of gravity. Now, however, the rate is increasing, an effect caused by an unknown force running counter to gravity that has been dubbed dark energy.

“Dark energy is an even bigger mystery than dark matter,” Sheldon said. “We know even less about it and it may be that there’s nothing in our theories that describes it.”

Cosmologists hope that with continued surveys, new insight into these dark entities may be possible. Understanding what makes up the universe will ultimately help reconstruct a full picture of its history.

That said, complexity and mystery are part of cosmology’s allure. When asked what drew him to his field, Sheldon was initially stumped.

“I know the things that I like about cosmology but I don’t know why,” Sheldon said. “I’ve wanted to be an astrophysicist since I was young and read books about the history of the universe. It’s not an infantile subject, it’s not easy to grasp.”

He smiled, thinking of another explanation for the appeal of the cosmos: