The following news release was issued by the U.S. Department of Energy (DOE). It announces funding for projects that will aim to improve climate prediction to augment efforts to mitigate climate change. The new research also will accelerate development of DOE’s Energy Exascale Earth System Model (E3SM). Brookhaven Lab’s Computational Science Initiative (CSI) is a partner in two of the awarded projects, Improving Projections of AMOC and its Collapse Through advanced Simulations (ImPACTS) and Framework for Antarctic System Science in E3SM. Both projects are being led by Los Alamos National Laboratory. ImPACTS will study the ocean circulation pattern known as the Atlantic Meridional Overturning Circulation, or AMOC, to better understand how it is represented in models, like E3SM, as well as to enable long-term AMOC simulations. Shinjae Yoo, CSI’s Artificial Intelligence/Machine Learning (AI/ML) Group Lead, will oversee ImPACTS’ AI analysis and implementation efforts. Meanwhile, the Antarctic System Science framework project will facilitate a full, integrated representation of Antarctica within E3SM. Nathan Urban, CSI’s Applied Mathematics Group Lead, will direct the development of statistical and ML methods to calibrate the E3SM model to observational data and produce probabilistic projections of future contributions of Antarctic ice discharge to sea level rise. 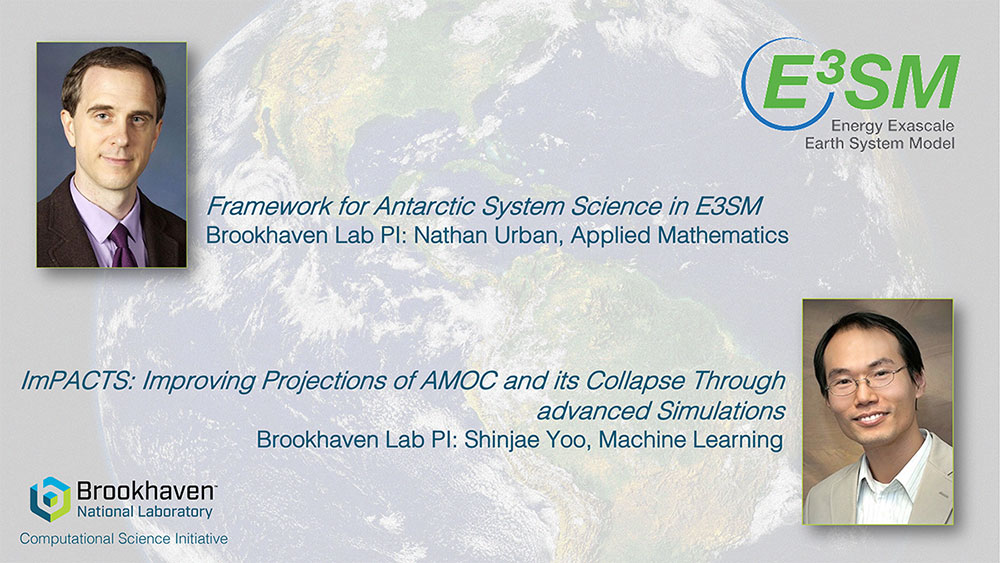 WASHINGTON, D.C.—The U.S. Department of Energy (DOE) today announced $70 million in funding for seven projects that will improve climate prediction and aid in the fight against climate change. The research will be used to accelerate development of DOE’s Energy Exascale Earth System Model (E3SM), enabling scientific discovery through collaborations between climate scientists, computer scientists, and applied mathematicians. Data from this model will enhance scientists’ understanding of climate change, which will be crucial to furthering President Biden’s commitment to tackling the climate crisis at home and abroad.

“Being able to understand and predict what is happening in a system as complex as planet Earth is crucial to finding solutions to climate change,” said U.S. Secretary of Energy Jennifer M. Granholm. “The projects announced today will give university and National Lab researchers deep insight into our oceans, our air, and our climate and into how emissions are impacting the world around us right now and in the future.”

E3SM is an ultra-high-resolution model of Earth that is run on exascale supercomputers—digital computers like the Frontier at Oak Ridge National Laboratory that are millions of times more powerful than modern personal computers. The model is constantly being improved to provide the best simulation and prediction possible to researchers in Earth system science.

The projects announced today will improve the E3SM by, for example, advancing simulations of ocean circulation in the Atlantic and developing a framework for modeling Antarctic systems.

The projects were selected through competitive peer review process under the DOE Funding Opportunity Announcement for Scientific Discovery through Advanced Computing. Total funding is $70 million for projects lasting up to five years in duration, with $14 million in Fiscal Year 2022 dollars and outyear funding contingent on congressional appropriations.

The list of projects and more information can be found here.