Researchers from Princeton University working at Brookhaven’s National Synchrotron Light Source (NSLS) have solved the mystery of how molybdenum, one of the elements needed to prepare nitrogen for plant consumption, is available in soil. 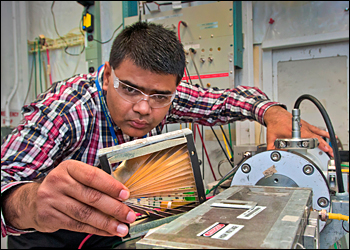 Plants and other organisms require mineral nutrients to grow. Among these, nitrogen is key to cellular growth and the functioning of proteins and nucleic acids. Pure nitrogen molecules are plentiful in the atmosphere, but their atmospheric form is not usable by most organisms. Nature’s solution is a process called nitrogen fixation, in which nitrogen is combined with hydrogen or oxygen to create a new molecule that can be used by various organisms.

“In order for nitrogen to be used for growth it must be fixed, or combined, in the form of ammonium (NH4) or nitrate (NO3) ions,” said corresponding author Bhoopesh Mishra. Mishra, who conducted this study as a postdoctoral research associate at Princeton University, now works at Argonne National Laboratory.

To solve this mystery, Princeton scientists collected soil samples from molybdenum-rich Arizona soil, as well as multiple layers of soil from a temperate hardwood forest in New Jersey.

After some initial troubleshooting at the Stanford Synchrotron Radiation Lightsource, they brought their samples to NSLS beamlines X26A and X18B to take a closer look at how molybdenum is present in the soil. 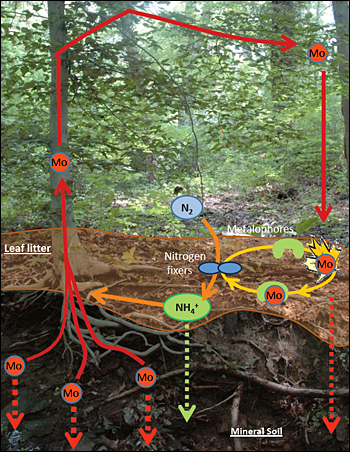 The molybdenum (Mo) cycle in soil: Mo present in deep soil is extracted by the root network of trees and incorporated into leaves. These leaves fall to the ground and decompose, providing a Mo-enriched environment for nitrogen(N2)-fixing bacteria living in the upper soil. Binding of Mo to leaf organic matter reduces Mo leaching rates from the soil, keeping Mo in the soil environment where it can be used by the bacteria. In turn, the new nitrogen fixed by the bacteria fertilizes tree growth, resulting in a classic mutualistic relationship.

Using these beamlines, Mishra and his colleagues mapped out on the micro-scale how molybedenum is distributed and in what form, as well as how it adheres to other minerals.

Consistent with past observations, molybdenum was found to stick to the surfaces of iron oxides. However, their next discovery was a surprise. The scientists found strong evidence of molybdenum binding to natural organic matter, particularly in the upper soil layers, rich in leaf-litter and free-living nitrogen-fixing bacteria. There, molybdenum from tree leaves bound to tannins was found in the soil.

This finding suggests a molybdenum cycle: molybdenum in the soil is taken up by tree roots and deposited in leaves. These leaves fall to the ground and decompose, releasing molybdenum, which binds to tannins and tannin-compounds in soil.

This solved one half of the mystery: by binding to tannins, molybdenum could be preserved in the upper levels of the soil, where nitrogen-fixing bacteria was present, without leaching away.

However, there still remained questions about molybdenum’s transformation into a catalyst for nitrogen fixation. To understand this, Mishra and his colleagues studied the nitrogen-fixing bacteria in soil with tannin-bound molybdenum.

They found that the bacteria excrete a compound that strongly attracts iron and other metals. Molybdenum, held in the upper soil by tannin, binds to this compound, which can outcompete the tannin in attracting molybdenum. This new molybdenum compound is one that nitrogen-fixing bacteria can access to create the enzyme responsible for nitrogen fixation.

In turn, fixed nitrogen will penetrate the soil, be taken up by the root system of plants and promote plant growth. When molybdenum does slip away to lower soil levels, it eventually adheres to other minerals and is taken up through a tree’s root system, enabling the entire cycle to begin again.

“Perhaps the biggest surprise of this study was the beauty of such an elegant and efficient mechanism adopted by plants to acquire nitrogen,” Mishra said.

Mishra and his colleagues believe that this cycle is likely to be universal among fertile land-based ecosystems. The molybdenum binding that they observed occurs within a specific pH range that corresponds to fertile soil. In highly acidic soil, molybdenum binds to mineral surfaces so that it is unavailable for biological uptake. In extremely alkaline soil, bacterial exudates required to acquire molybdenum become unstable, resulting in the eventual washing away of molybdenum.

“It is only in extreme conditions, where we would probably find little vegetation, that molybdenum would be unavailable,” Mishra said. “Contrary to long-standing belief, molybdenum is not the limiting factor for nitrogen fixation in soil — in fact, it is present in soil and used very efficiently.”

Not only can these findings be directly applied to horticulture and agricultural practices, they open the door for more research into the role of compounds secreted by bacteria in the metal uptake required for biochemical reactions.

The group’s findings were reported in the September 2009 edition of Nature Geoscience.

This work was supported by the Camille and Henry Dreyfus Postdoctoral Program in Environmental Chemistry and by the Stanford Environmental Molecular Science Institute, which is funded by the National Science Foundation.