A new accelerator facility that produces blazing hot and very rare subatomic particles will have a state-of-the-art, Brookhaven-built magnet at its core. After years of development, scientists and engineers in Brookhaven’s Superconducting Magnet Division have started winding the coils for a special high-temperature superconducting magnet that will play a key role in the Facility for Rare Isotope Beams (FRIB) at Michigan State University.

Funded by the U.S. Department of Energy (DOE) Office of Science, FRIB will explore the properties of rare isotopes — short-lived nuclei not normally found on Earth. The goal of the $615 million project is to uncover details about the origin of the elements and the evolution of the cosmos.

“FRIB will produce nuclei never produced outside of stellar explosions,” said Brookhaven physicist Ramesh Gupta, principal investigator for the magnet project. “These isotopes could reveal the birthplace of many heavy elements, and maybe even extend our periodic table.” 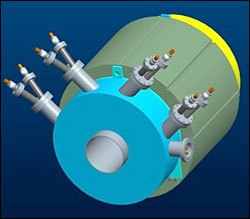 FRIB’s linear accelerator will smash a beam packed with heavy ions into a metal target. It’s then up to a superconducting magnet made at Brookhaven to collect the quickly scattering and piping-hot subatomic debris so that it can be studied using other instrumentation down the line.

This fragmentation quadrupole magnet is made of long, thin strips, called “tapes,” of the superconducting material YBCO (named for its constituent elements yttrium, barium, copper, and oxygen). The strips are tightly “wound,” or layered on top of each other, using a special coil-winding machine in the Superconducting Magnet Division. Because YBCO is very brittle, tension is applied during the winding process by sandwiching each layer with thin pieces of stainless steel.

YBCO is difficult to manipulate, but it more than makes up for its shortcomings with its “super” properties. In addition to transporting electricity with virtually no resistance, high-temperature superconductors are able to produce magnetic fields much higher than those of conventional magnets. This is a requirement for the fragmentation magnet, which will use its strong magnetic field and large aperture to collect as much particle debris as possible.

The magnet also must be able to handle high radiation doses and extreme heat.

“It’s the first magnet after the target, and therefore it’s going to feel tremendous heat from the particle spray,” Gupta said.

Researchers have found that magnets built from high-temperature superconductors like YBCO — which will run at a relatively “warm” temperature of about 40 Kelvin (-387 degrees Fahrenheit) — are able to remove these high heat loads much more efficiently than magnets made with low-temperature (standard) superconductors, such as those used in magnetic resonance imaging (MRI). And while previous superconducting magnet designs often used epoxy or some other plastic as an insulator, the stainless steel chosen by Brookhaven engineers will stand up to the radiation produced at FRIB’s target.

The first of the fragmentation magnet’s eight coils — each of which receives at least 100 turns of YBCO and stainless steel — is already complete. The finished magnet, which will be about three feet long, will be delivered to Michigan State in the spring of 2012.

FRIB is expected to start running in 2020, with an early completion date in 2018.