The March edition of the CERN Courier has a familiar magnet on its cover. The octupole (eight-magnetic-pole) magnet — fabricated in Brookhaven Lab’s Superconducting Magnet Division in 2006 — recently helped an international team of scientists working on the ALPHA collaboration at CERN trap and store a significant amount of antimatter atoms for the first time.

The magnet is the main component of the bottle-like, antimatter-catching device, which is called a minimum magnetic field trap. The octupole’s magnetic fields keep the antimatter away from the walls of the trap, preventing them from annihilating. Using a specially developed 3D winding machine, the Brookhaven team built the magnet directly onto the outside of the trap.

You can read the Courier’s story about ALPHA’s success here. 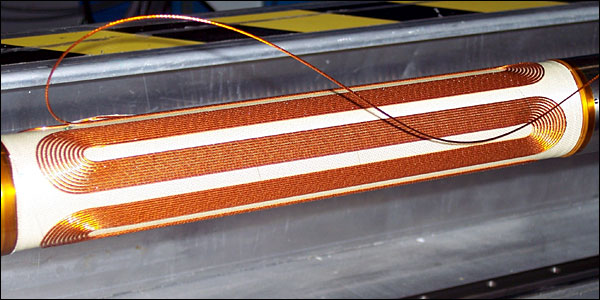 The ALPHA octupole being wound at Brookhaven