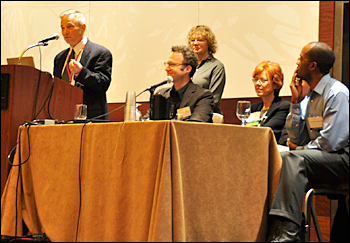 At the annual meeting of the American Association for the Advancement of Science last week in Chicago, the sessions covered a wide range of scientific fields, from climate change to the mathematics of origami. Of course for me, the highlight was the symposium that I organized with Bill Zajc, professor at Columbia University and former spokesperson for the PHENIX experiment at RHIC.

Titled "Quest for the Perfect Liquid: Connections Between Heavy Ions, String Theory, and Cold Atoms," the session covered the emerging relevance of the physics done at RHIC to other subfields of physics, ones that were never thought to be related.

Our speakers came both from within the RHIC community, as well as from fields that turn out to have a closer connection to RHIC physics than had been realized. It turns out that physicists from three separate fields are all intensely interested in the physics of strongly-coupled liquids, which flow so easily that they are called "perfect" liquids.

PHENIX spokesperson Barbara Jacak of Stony Brook University presented the major results from RHIC, which has been providing collisions since 2000. She paid particular attention to the main features of the medium formed in heavy ion collisions at RHIC: that it flows like a near-perfect liquid, a property intimately connected to its ability to stop the motion of fast-moving quarks (both light and heavy). Using these data, RHIC scientists are able to determine a particular ratio — that of viscosity-to-entropy density — to be quite small.

John Thomas, an atomic physicist from Duke University, presented his experimental results on ultracold atomic gases. In these experiments, clouds of atoms are released from optical traps, and their expansion is visualized by laser flash-imaging techniques. An external magnetic field affects the coupling of the atoms and can be tuned to put the system in a strongly coupled "universal" regime. Here, the system acts in a way similar to RHIC collisions, expanding asymmetrically according to the laws of fluid flow. The viscosity-to-entropy density ratio has also been measured here and is as low (or maybe lower!) than that found at RHIC.

Rounding out the presenters was Clifford Johnson of the University of Southern California. He described how the mathematical techniques of string theory are elucidating the properties of these strongly interacting near-perfect liquids, based on the ideas of string theory. These techniques are used to draw a connection between a strongly coupled quark-gluon liquid in our world of three spatial dimensions and a gravity theory living in four spatial dimensions with a black hole sitting deep in the fifth dimension! While this scenario sounds strange, it provides one of the few concrete predictions arising from string theory calculations — that the ratio of viscosity-to-entropy density has a lower limit, a value that seems to be observed by both RHIC and the ultracold atomic physics experiments.

The serendipitous convergence of these three separate fields has been very exciting — and useful — for everyone involved, giving all of us the strong sense that we are only starting to grasp its implications. And it is quite striking that the tools of string theory have provided a sharp, testable prediction for the first time — one that seems to be borne out by experiments from completely different fields.

Our symposium had over 120 attendees, ranging from high-school students to scientists in a variety of physics sub-disciplines, showing the wide interest this emerging field of science has attracted. It was subsequently covered by several physics blogs.

Symmetry magazine's assistant editor Glenda Chui served as a discussant along with Bill, and they both addressed questions to the speakers following the talks.

Chui herself posted a blog a few days later. The interest in Chui's report was so great that it overloaded the symmetry server, shutting it down temporarily. Comments posted there show that connecting experimental data to string theory is controversial, especially if this is used to argue for the "reality" of string theory. But such debate is fitting for the kind of forefront science we do here at Brookhaven with RHIC.