BNL’s Engineering Awards for 2011 were presented by BNL Deputy Director for Operations Mike Bebon to the five winners — Dennis Danseglio, Modernization Project Office; Thomas Joos, Photon Sciences Directorate; Wing Louie, Photon Sciences; Chien-Ih Pai, Collider Accelerator Department; and Nikolaos Simos, Photon Sciences and Energy Sciences & Technology Department — at the annual Employee Recognition Award Ceremony held in Berkner Hall on Friday, June 17. The awards, consisting of a plaque and $10,000 each, are given to recognize distinguished contributions to the Laboratory’s mission in each of three broad areas of work, and are the highest accolades given by Brookhaven to its employees. The 16 awards were first announced in The Bulletin of June 24; six Science & Technology Award winners and five Brookhaven Award winners were featured @brookhaven Today on July 20 and August 2, respectively. The contributions of the five Engineering Award winners follow below. 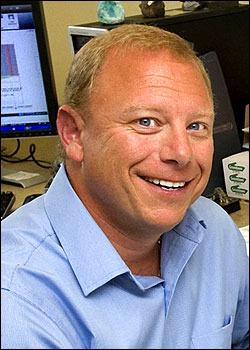 During his 18-year tenure at BNL, Dennis Danseglio, a lead electrical engineer and project manager in the Modernization Project Office, has worked on projects totaling more than $300 million in construction costs, completing each project on time and within budget.

Among his many outstanding achievements was his management of the 11,100-square-foot Computer Data Center expansion. The project involved expanding the east side of Bldg. 515 to house computers and storage systems needed to analyze data from detectors at the Relativistic Heavy Ion Collider (RHIC) and other major experiments around the world.

Danseglio also engineered and managed the installation of the ventilation system in the RHIC tunnel and the 13.8-kilovolt electrical overhead distribution line around the RHIC ring.

To improve the safety of the Lab’s electrical systems, Danseglio engineered and installed site-wide ground monitoring systems throughout the BNL complex in an effort to detect dangerous voltage buildup. He standardized fabrication and installation methods, saving the $1.3 million project $650,000. Currently, Danseglio is working on a $22 million site-wide telephone system installation project to meet the future demands of BNL’s infrastructure expansion and Blueprint initiative. In addition, he will be managing the design and construction of the $70 million, 90,000-square-foot Interdisciplinary Science Building (ISB) — Phase II, located just west of ISB-I, pending DOE approval.

A New York State-licensed professional engineer and project management professional, Danseglio earned a B.E. in electrical engineering from Maritime College in 1985, and worked in engineering positions for the Long Island Lighting Company and the ABB Group in Melville, NY, before joining BNL in 1993 as a project engineer. He rose through the ranks to his current position in 2007. 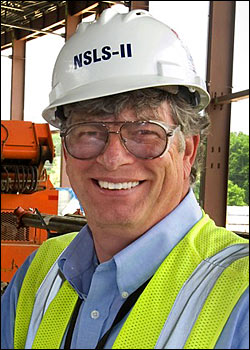 As the lead structural engineer for the construction of BNL’s Center for Functional Nanomaterials (CFN) and future NSLS-II, Joos has solved challenges far beyond those normally encountered by a professional engineer. Structural performance is integral for such facilities where scientists work at the nanoscale — measured in billionths of a meter. To protect research in these facilities from vibrations caused by nearby traffic and shifting as grounds freeze and thaw, Joos coordinated structural designs using innovative vibration isolation techniques and vibration-damping concrete. Engineers installing instruments at the CFN noted that the structure was the most stable environment they ever saw.

Known for his technical know-how, thorough analytical skills, and the rigor required to assure the safety and viability of projects, Joos has not only been involved in the Laboratory’s large facilities that are built from the ground up. He also developed modifications for existing buildings on site to support new research facilities, including a former gymnasium that now houses an electron microscopy laboratory and another building with a powerful magnetic resonance imaging facility.

Joos earned a bachelor of science in civil and environmental engineering at Cornell University. He worked for the Long Island Lighting Company’s Engineering & Design Division (Nuclear) and the Town of North Hempstead’s Department of Public Works before joining BNL in 1989. 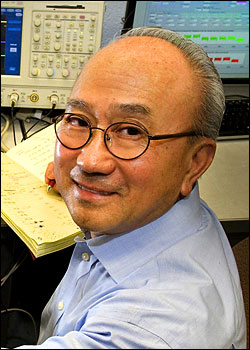 Wing Louie, a senior project engineer in the Photon Sciences Directorate, was recognized for his outstanding contributions in developing hardware designs that have played a vital role in ensuring the smooth functioning of the Relativistic Heavy Ion Collider (RHIC) and the National Synchrotron Light Source II (NSLS-II).

Louie designed the quench detection system for RHIC’s approximately 1,700 superconducting magnets. The system can determine if a magnet loses current and shifts from superconducting to “normal.” This transition leads to dysfunction that can harm the magnet. Louie’s system shuts down the power supplies to protect the magnets from damage.

Louie also designed the RHIC timing resolver system, which pinpoints the failure of the power supply hardware that is spread out along the 2.5-mile collider tunnel and in-service buildings. The system allows operators to determine the cause of a malfunction quickly and precisely to minimize RHIC’s downtime.

The NSLS-II superconducting magnets require very precise and stable currents to operate correctly, and Louie designed a power supply control system that meets all of the challenging requirements for the synchrotron. He also added remote diagnostic and tracking features that monitor the power supply performance. Currently, Louie is preparing for the system’s integration at the NSLS-II.

Louie received bachelor’s and master’s degrees in electrical engineering from the City College of New York in 1976 and 1979, respectively. Before joining BNL in 1992 as a project engineer, he worked on various engineering projects at several Long Island companies, including Unisys, Periphonics Corporation (now part of Nortel) and Northrop Grumman.

Chien-Ih Pai, a senior research engineer in the Collider Accelerator Department (C-AD), was recognized for his many years of outstanding engineering contributions to the Alternating Gradient Synchrotron (AGS) and Relativistic Heavy Ion Collider (RHIC) operations as well as C-AD experimental programs. Pai has been the lead project engineer and an engineering design analyst on many high-level projects, and his expertise and dedication has ensured that even new and unique components work the first time and continue to work reliably.

Pai joined the AGS Mechanical Engineering team in 1988 to work on the g-2 experiment, which required extreme stability in the magnetic field of a huge superconducting storage ring magnet — still the world’s largest. He met the extraordinary challenges of that project and provided outstanding engineering and design support for BNL’s role in the Spallation Neutron Source at Oak Ridge National Laboratory and the ATLAS detector at CERN, Switzerland. Other highlights include his design of the high speed magnets for dumping the beam out of RHIC and the high-voltage pulse-forming networks controlling the beam pulses vital for RHIC experiments. He was responsible for the design of the tuner assembly and the tooling for the assembly of the first superconducting radio frequency (RF) cavity to be built at BNL with support from an outside contractor. He is now the lead engineer responsible for the engineering and design of the first RF cavity to be solely designed by BNL.

Pai’s engineering achievements and analysis excellence, combined with his consistent support for safe operations have greatly contributed to the reliable and safe operation of many of BNL’s critical systems. 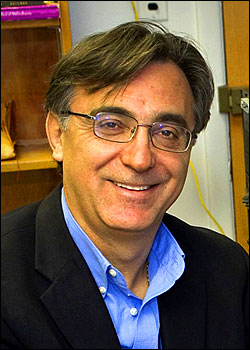 Nikolaos Simos, a scientist for BNL’s National Synchrotron Light Source II (NSLS-II) Project and Energy Sciences & Technology Department, is recognized for his outstanding engineering contributions in the study and design of future world-leading accelerators such as NSLS-II.

Simos’ engineering acumen has provided an analytical basis for what in the past may have been left to conventional practices or rules of thumb. With the paramount goal of analyzing materials as small as one nanometer — a billionth of a meter — at NSLS-II, Simos used his exceptional creativity to lead a multi-year effort combining extensive field studies and measurements with sophisticated analytical models to guide design of the future facility and protect its storage ring and experimental floor from ground vibrations, winds, and temperatures fluctuations. These analyses are considered state-of-the-art by numerous external review committees and he has been asked to provide advice for other next-generation light source facilities at Cornell University and in Australia, Brazil, Japan, and Korea.

Simos’ other research includes investigating how materials are weakened by radiation in high-power accelerators, next-generation fission and fusion reactors, shocks from high velocity impacts and implosions, and proton beam experiments. He also works to assess the vulnerabilities of nuclear facilities and other critical infrastructure relating to extreme events such as earthquakes. Simos is currently leading experiments for the Long Baseline Neutrino Experiment at Fermilab and the Large Hadron Collider at CERN, and he is an advisor for projects including the Facility for Rare Isotopes (FRIB) at Michigan State University, the High Radiation of Materials (HiRadMat) facility at CERN, and the future X-ray Free Electron Laser (XFEL) in Korea.

Simos earned a Ph.D. in mechanical engineering and he completed postdoctoral research in earthquake engineering before arriving at BNL in 1989.