Researchers at the University of Delaware in collaboration with scientists at Brookhaven National Laboratory have shown that the chemical structure and bioavailability of cadmium-contaminated soil changes with the flooding and drying cycles of lowland rice culture. 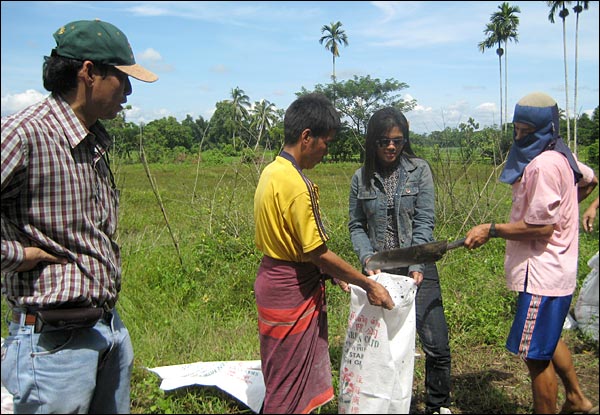 Cadmium is a natural element found in some soils, but human activities like mining and smelting release cadmium into the environment at higher concentrations than normal. This can create a toxic situation for organisms living nearby if the cadmium binds to organic elements and enters the food chain.

In 2003, the International Water Management Institute reported that the Mae Sot district of Thailand had “considerable amounts” of cadmium and zinc in its irrigation water, paddy soils, and rice grain. Saengdao Khaokaew, a Thai graduate student at the University of Delaware and the principal investigator of the study, wanted to determine whether the cadmium remained in inert mineral form or attached to organic sulfur and carbon as a result of the flooding and draining cycles used to cultivate rice. 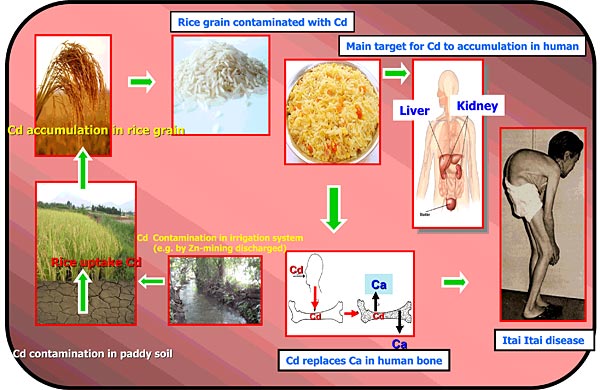 Cadmium in the human food chain

”As of right now, rice production is officially prohibited in the Mae Sot district, affecting approximately 500 farmers and thousands of families,” said Khaokaew. “But even though outside sales of rice produce from this region are prohibited, many who live there are still growing rice on contaminated land for the purpose of feeding their families. The reason why I sought to study the total concentration and speciation of the cadmium in the soils is twofold: first, I wanted to find out whether it was in a form that could be taken up into plants. Second, to see if I could chemically alter the species and change it into a form that could be extracted from the soil.”

When environmental scientists like Khaokaew’s team of researchers want to study the chemical composition of soil in real-world conditions such as this, synchrotron-based technology allows for highly specific analysis without the destruction or alteration of the soil sample itself.

While most people don’t often associate the word “tender” with the word “x-ray,” at Brookhaven’s National Synchrotron Light Source beamline X15B, a unique type of x-ray technology called tender energy absorption spectroscopy allows scientists to study delicate and diverse materials on both a macro and a micro scale, with precision and versatility that chemical methods and higher-energy beams are unable to achieve.

Tender energy absorption spectroscopy is a technique in which photon scientists shine a soft x-ray beam at very specific energies onto a sample of the material they wish to study. Then the scientists watch as different elements in the sample absorb the particular x-ray energy at which they fluoresce, indicating the elements’ presence and their concentrations.

For this study, researchers collected samples from random locations on the Mae Sot site within a 10-square-meter area and assembled a composite sample for incubation experiments in the lab. In order to mimic the environment of paddy soils in lowland rice culture, they applied the conditions of four flooding and two drying periods to the sample.

To see how and where cadmium bonded to other elements throughout the Thai soil, researchers scanned x-ray beams into their sample and observed the “fingerprint” of each element within. They ran the x-rays across both large and small areas of their soil sample to obtain information about the spatial scales of cadmium distribution and to see what other elements cadmium became chemically associated with. 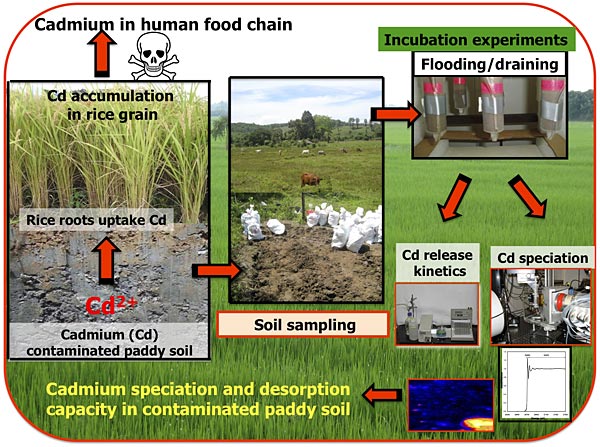 The researchers concluded that cadmium in the Mae Sot soil changed its chemical composition into potentially dangerous, organically available forms throughout various wet and dry cycles, indicating the need for remediation efforts. The findings were published in the May 15, 2011, issue of Environmental Science & Technology.

“Examining the content of rice paddy soils to get both the ‘big picture’ as well as a close look at chemical relationships as they’re formed and rearranged will ultimately lead to more effective and efficient solutions to the cadmium contamination problem,” said Paul Northrup, director at X15B.

Knowing which species of cadmium is in the Mae Sot soil — and similar caustic environments — at different times, scientists can assess when and how to manipulate characteristics of the soil to encourage the toxic metal to take the form of an inert mineral rather than an organic compound.

“With further research, I hope we will be able to have the information necessary to provide a solution for these farmers by the end of the year in 2012,” said Khaokhew. “Removing the cadmium in the Mae Sot soil will probably take a mixture of two processes — the addition of chemicals that bind to cadmium and can turn into a soluble, extractable form, and phytoremediation techniques, in which we plant crops that naturally absorb cadmium.”

Khaokaew received a grant from the King of Thailand to conduct graduate studies in the United States and will use the results of this experiment to help reduce the toxicity and mobility of the cadmium in rice paddy soil. Financial support was provided by the Delaware Experimental Program to Stimulate Competitive Research, funded by the National Science Foundation. The NSLS is funded by the U.S. Department of Energy Office of Science.