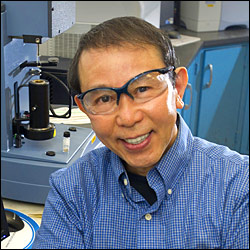 Toshifumi Sugama, a chemist in the Sustainable Energy Technologies Department, will receive up to $600,000 in DOE funding for research to accelerate geothermal energy technologies. Sugama’s two projects are among 32 in 14 states that will develop and test new ways to locate geothermal resources and improve resource characterization, drilling, and reservoir engineering techniques.

DOE’s Office of Energy Efficiency and Renewable Energy is providing $38 million over three years to national labs and industry for geothermal energy research that will decrease the nation’s dependence on fossil fuels. The advances in geothermal technology that are expected from this research will play an important role in achieving President Obama’s goal of generating 80 percent of U.S. electricity from clean energy sources by 2035.

Energy from the Earth

Geothermal energy is derived from heat stored in the Earth. Geothermal resources can be found in shallow areas or miles below the Earth’s surface in very hot molten rock, called magma. Until recently, geothermal power in the U.S. has only been derived from areas where naturally occurring reservoirs of heat, water, and permeable rock is sufficient to allow efficient extraction — mostly in western states, and in Alaska and Hawaii. By using a new technology, known as the “enhanced geothermal system,” additional geothermal resources can be tapped.

“By using this new technology, we can access geothermal energy from most areas of the U.S., including New York,” Sugama said. “With this DOE funding, I will be working on a cement composite and degradable sealer that are expected to make the enhanced geothermal system more efficient and economical.”

To access geothermal energy using the enhanced method, a high-pressure fluid-powered drill is used to break down dry rocks being heated by molten magma. The fluid pressure causes the rock to become more permeable, allowing water to travel through fractures in the hot rock and capture the geothermal heat. This very hot water is then circulated to another well, from which it can be accessed to generate electricity or heat.

Sugama will develop a cost-effective, multi-functional cement composite to be used in geothermal wells. The innovative cement composite can mitigate the corrosion of carbon steel casings at high hydrothermal temperatures of more than 200 degrees Celsius (396 degrees Fahrenheit). The composite will be lightweight, alkali-activated and acid-resistant, and will protect geothermal wellbores against failure risks, such as thermal shock and expansion, caused by superheating and cooling cycles during hydraulic stimulation processes. The temperature extremes may lead to bond failure at the interfaces between the cement sheath and carbon steel casings of the well.

Drilling can account for as much as one-third of the total cost of accessing geothermal energy, but a self-degradable sealer that Sugama has developed and will optimize to address fluid loss while drilling as far down into the Earth as 10 kilometers (6.2 miles) will make drilling more efficient and less costly. To cool and lubricate the drill, a fluid called drilling mud is pumped down the drill tube. This mud is dispersed through holes in the drill and flows back up the well to be recirculated. In this process, the mud sometimes seeps into rock fractures, causing lost circulation. To correct this problem, drill operators must seal or plug the lost circulation zones with appropriate materials to avoid deleting the drilling fluid and losing mud. At this point, Sugama’s sealer is used for this purpose. Then the drilling can resume until the wellbore structure is completed, and the hydraulic-stimulation process begins. At this point, the sealer self-degrades, allowing the sealed rock fractures to be reopened, so that heat for geothermal energy can be released.