The Daya Bay Neutrino Project, which uses the Guangdong Nuclear Power Group’s reactors in southern China as a source of antineutrinos, is primed to measure the last piece of the neutrino puzzle. It began taking data from the first of three planned experimental halls earlier this year, and the second hall should be up and running within the next few weeks. The collaboration is international and includes strong teams from China and the US as well as teams from other countries and regions including Taiwan, Hong Kong, Russia and the Czech Republic. Brookhaven National Laboratory has made significant contributions to this experiment, the latest step in the saga of neutrino research. 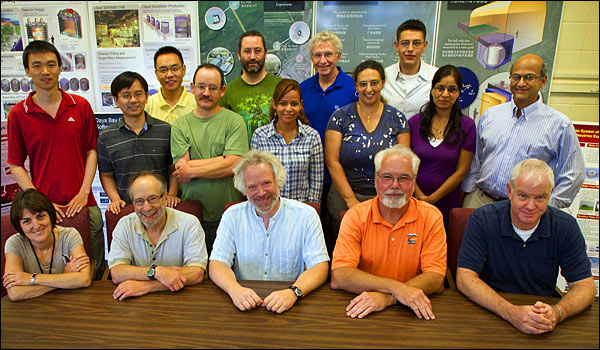 “Brookhaven’s chemistry and physics departments have major leadership roles in the experiment, from designing the detectors all the way through to analysis of the data gathered,” says Steve Kettell, chief scientist for the U.S. Daya Bay Project and leader of Brookhaven's Electronic Detector Group.

As Daya Bay gets under way, let’s take a moment to look back on the history of neutrino research and the contributions from Brookhaven National Lab.

Neutrinos were first proposed by Wolfgang Pauli as early as the 1930s, but were only detected in the 1950s at nuclear reactors in Washington and South Carolina by Frederick Reines and Clyde Cowan. This earned a Nobel Prize in 1995. Neutrinos’ name, give by Enrico Fermi, means “little neutral one.”

Brookhaven Lab’s first major contribution to neutrino research occurred in 1957, when Maurice Goldhaber performed an experiment that revealed neutrinos to be left-handed.

In 1962, a new type of neutrino, the muon neutrino, was discovered by scientists using the Alternating Gradient Synchrotron at BNL. Leon Lederman, Mel Schwartz, Jack Steinberger took home the 1988 Nobel Prize for this work, which established that there was more than one flavor of neutrino.

In the late 1960s, BNL chemist Ray Davis discovered the solar neutrino problem. At the Homestake Mine in South Dakota, deep underground in order to shield the detector from cosmic rays, Davis was the first person able to directly detect the electron neutrinos being produced by the sun. But he only observed about one-third of the expected amount — this deficit would eventually become known as the solar neutrino problem (and the “missing” neutrinos would later turn out to be those that had changed to forms undetectable by Davis’ experiment while en route to Earth).

From the 1990s through the mid-2000s, BNL chemistry’s neutrino group played important roles in the GALLEX (Gallium Experiment) and SNO (Sudbury Neutrino Observatory) experiments in Italy and Canada, respectively. BNL chemist Richard Hahn and his group were integral to the SNO experiment, which proved that neutrinos do oscillate between three forms — electron, muon, and tau.

Meanwhile, the Super-Kamiokande experiment in Japan, in which BNL was represented by physicist and former Lab Director Maurice Goldhaber, had confirmed that neutrinos do indeed oscillate and have mass. Davis’s problem was solved: he had observed only the fraction of electron neutrinos from the sun that reached Earth without changing into muon or tau neutrinos. In 2002, his work was acknowledged with the Nobel Prize in Physics, shared with Masatoshi Koshiba of Japan and Riccardo Giacconi of the U.S.

BNL then became involved in the ongoing MINOS (Main Injector Neutrino Oscillation Search) experiment based at Fermi National Accelerator Laboratory in Illinois, which began taking data in 2005 and has since provided measurements of mixing angles and oscillation frequency that describe how muon and tau neutrino types oscillate between one form and another.

In addition, Brookhaven is integral to the Daya Bay Neutrino Project, which just began taking data this year. This experiment aims to measure the final unknown mixing angle that describes how neutrinos oscillate — another chapter in BNL’s long history of neutrino research over the last several decades.

Neutrinos are the ghosts of the particle physics world. Most of them pass through anything and everything, even entire planets, without interacting. At a given moment, tens of billions of neutrinos are passing through every square centimeter of the Earth’s surface — including you and me — without our noticing it. This makes detecting them especially problematic. What’s more, they come in three flavors: electron, muon, and tau — and each has its own quirks that necessitate specific detection techniques. Neutrinos are also able to change between these three forms, a process characterized by numbers known as “mixing angles.”

Previous experiments have measured the way neutrinos oscillate between the tau and muon forms and the muon and electron forms. However, the mixing angle that characterizes oscillations between the electron and tau forms, known as θ13 (“theta-one-three”), is the one parameter describing neutrinos that remains a mystery.

The reactors being used for the Daya Bay experiment produce many more antineutrinos than neutrinos, says Kettell. “In theory, measuring the way antineutrinos oscillate between electron and tau forms should tell us the currently unobserved mixing angle θ13,” he said. “Because neutrinos and antineutrinos are antipartners of one another, the way their forms oscillate should be equivalent.” So, all other things being equal, it made sense to use antineutrinos to investigate this unknown parameter: more particles mean more data and a better measurement.

At the moment, Daya Bay’s first twin detectors are recording the interactions of antineutrinos as they travel away from the reactors. This is only the first set of planned detector pairs. There will eventually be four nearly identical detector pairs set up in three different experimental halls. These will be built deep under adjacent mountains to shield them from any interfering particles from space.

As the project prepares for the next step, Brookhaven maintains a major presence. For any collaboration of this scale, the number of people needed is dizzying.

Kettell, as chief scientist for the U.S. effort, is a member of the collaboration executive board and oversees many aspects of the project, including detector design and commissioning.

Brookhaven’s Ralph Brown of the Physics Department is the chief engineer for the U.S. effort at Daya Bay, and he manages the technical direction of the project — from assembly and installation through the interfaces between the various mechanical systems that make up the equipment, a vital job on such a technologically intensive project.

Brown offers the following anecdote describing one of the hurdles of his job: “I had to find a heavy haul vehicle capable of transporting an assembled [25-ton] antineutrino detector underground to the liquid scintillator filling hall, and then, once it was filled [now weighing 110 tons] to the experimental halls for installation.”

Meanwhile, Hide Tanaka is commissioning co-coordinator and is responsible for the set up and debugging of the detectors. He has spent significant time in China making sure all of the detectors work as designed.

Within those detectors, of course, are various vital subsystems. Richard Hahn and Minfang Yeh of Brookhaven’s Chemistry Department devised the “recipe” for the clear liquid scintillator that fills the massive cylindrical detectors. This liquid reveals antineutrino interactions by very faint flashes of light. They have also approved materials that come into contact with the liquid scintillator to ensure it won’t interfere with the scintillator’s ability to detect antineutrinos.

Similarly, Laurie Littenberg and Bob Hackenburg of physics handle management of the muon-veto system, which protects the antineutrino detectors from ambient radioactivity present in the rock. The system also identifies false signals caused by interactions of cosmic rays that manage to penetrate the caverns containing the detectors.

On a project of this scale — deep underground and with heavy equipment — safety is a major concern, and the project’s safety officer is Ron Gill of BNL’s Physics Department (who has taken over from Dana Beavis, also of physics). Gill is responsible for the safety of all equipment, facilities, and practices.

Finally, once the experiment is up and running, everything’s safe, and data are being collected, David Jaffe and his analysis coordination committee are in charge of data analysis. They helped to develop techniques for simulation and provided input on the development of software that enables the analysis process.

Naturally, “all of these positions are supported by many others here at BNL,” notes Kettell.

Past Present in Future

Hahn, a longtime (now retired) neutrino researcher at BNL, who was a major proponent of BNL’s involvement in Daya Bay, points out that the Daya Bay experiment is a natural extension of BNL’s history (see sidebar): “We’ve been in the neutrino business for years,” he says, “and we’ve participated in several important experiments in the field.”

Left: Groundbreaking Ceremony for the Daya Bay experiment in October 2007
Center: Daya Bay collaborators on hill above near hall, with reactors in background
Right: Antineutrino detectors being installed

Says Associate Lab Director of Nuclear & Particle Physics Steve Vigdor, a member of Daya Bay’s laboratory oversight group, “Although this important collaboration between the U.S. and China has had to overcome challenges arising from cultural differences, it is now poised to provide both forefront science and a template for future scientific collaborations between our two countries.”

By making Daya Bay possible, Brookhaven is helping to open the door to the next step in neutrino research. Understanding neutrinos, says Kettell, could be the gateway to answers to some of the most profound questions plaguing physicists today: Why do we live in a universe where matter vastly outweighs antimatter? Why do we exist at all?