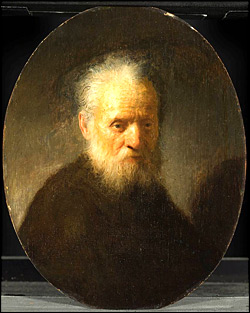 The quest to authenticate an unknown Rembrandt painting, titled “Old Man with a Beard,” hit a dramatic high at the National Synchrotron Light Source (NSLS) at Brookhaven National Laboratory. Using an advanced x-ray detector developed at NSLS, scientists found compelling evidence that the famous Dutch master did indeed have his own hand on the painting.

“After doing the experiments at NSLS, I felt that the painting I held in my hands was a genuine Rembrandt,” said D. Peter Siddons, physicist with the Photon Sciences Directorate. “We had identified hidden paint layers, which the art historians considered critical to determining attribution.”

Siddons explained that art historian Ernst van de Wetering and his colleagues – University of Delft materials scientist Joris Dik, art restorer Martin Bijl, and University of Antwerp chemist Koen Janssens – had all been working closely together to answer questions about the painting’s attribution and to probe beneath the surface for what they believed was a second image. The Europeans were eager to see what more they could learn using a specialized detector at the New York facility an ocean away.

The detector, named Maia, produced high-definition maps of the spatial distribution of different chemical elements in the painting, at speeds up to 100 times faster than previously achievable. Those results gave scientific support to the declaration of authentication just announced by van de Wetering at the Rembrandt House Museum in Amsterdam. Van de Wetering is chair of the Rembrandt Research Project and considered a preeminent authority on Rembrandt. 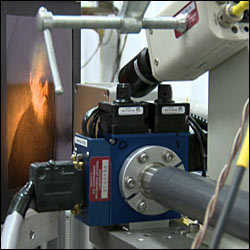 The newly authenticated Rembrandt painting under analysis in the Maia detector at Brookhaven Lab's NSLS beamline X7A. Image from Out of the Shadows.

Technology supported by the U.S. Department of Energy at Brookhaven is developed and optimized to study energy-relevant materials. New techniques and capabilities, however, can often shed light on other problems. According to Siddons, most of the light sources around the world now support an influential amount of “cultural heritage” research, both in art and archaeology. “This field poses interesting scientific questions, particularly since many objects are structurally and chemically very complex, challenging our most sophisticated instruments,” he said.

In the case of a painting, what lies underneath could be just as interesting, if not more so, than what the eye sees on the surface. But how do you peel back the layers on a fragile – and valuable – canvas without destroying the original image? Art historians and scientists have found an extremely effective way using penetrating beams of x-rays and powerful detectors such as Maia at NSLS.

Quite a few paintings have made appearances on the NSLS experimental floor – ranging from those created by 20th-century artists Bertha Lum and Edward Hopper to the portrait in the news now, declared to be painted nearly 400 years ago by a young Rembrandt Harmenszoon van Rijn.

“At the time, Rembrandt’s many students perfected their technique by copying their teacher’s works,” said Dik. “As a result, there’s a whole complex group of paintings that are exactly the same, slightly modified, or in some way related to each other,” he said. “The goal is to understand more about how they are related and where the hand of the master begins and ends.”

Out of the Shadows

For hundreds of years, the public has seen only the surface of famous masterpieces by artists such as Van Gogh and Rembrandt. Now, through a melding of innovative scientific techniques and art connoisseurship, completely different paintings and important clues about the artists themselves are being uncovered one layer at a time.

Out of the Shadows is a new documentary on the scientific analysis of art. Narrated by Donald Sutherland, the film takes viewers on a journey with a group of scholars who travel around the world to examine paintings that were once dismissed as being mere copies of Rembrandt and have recently been attributed as authentic.

Work conducted at NSLS to examine the “Old Man with a Beard” is featured in the documentary.

For more information on Out of the Shadows, go here or watch the trailer.

Learn more about D. Peter Siddons’ contribution to this work, and find a link to behind-the-scenes footage of x-ray fluorescence research conducted at Brookhaven’s National Synchrotron Light Source (NSLS), including studies of the Rembrandt painting and medical research.

Initial work was done at the European Synchrotron Radiation Facility, where heavy elements such as lead and mercury could be visualized. Then Dik, in collaboration with the Rembrandt Research Project and the painting’s owner, a private collector, discovered some puzzling information: Studies with a portable x-ray fluorescence (XRF) scanner revealed high concentrations of copper, not evident on the painting’s surface.

To investigate this anomaly further, the group teamed up with researchers from Cornell University, Australia’s Commonwealth Scientific and Industrial Research Organisation (CSIRO), and NSLS to use XRF through the Maia detector.

In x-ray fluorescence, a tiny x-ray beam is focused onto a sample, causing some electrons to be ejected from their “orbits” around atomic nuclei, leaving an ionized atom behind. Other electrons in the atom “fall” into the newly created vacancy and, in doing so, emit x-rays at energies characteristic of specific elements. As the sample is scanned through a highly focused x-ray beam, a 2D map of elemental composition vs. position is obtained.

“This is an application that benefits greatly from a synchrotron,” said Arthur Woll, a researcher at the Cornell High Energy Synchrotron Source and an expert in a variant of scanning XRF, not used for this painting, that allows the XRF signal to be resolved in 3D. “Yet, like all fluorescence experiments, one of the limitations is detector speed.”

That roadblock is primarily why the Rembrandt group crossed an ocean to use NSLS, where Siddons and colleagues have an international reputation for developing advanced x-ray detectors like Maia that are much faster and more precise than the traditional variety.

“We developed Maia to address challenges experienced by all x-ray microprobes with poor detector performance, including the inability to examine statistically significant areas of highly inhomogeneous samples, like those found in environmental samples or complex materials used in energy conversion,” Siddons said. The application of the technique to the analysis of a potentially famous artwork gave the researchers a chance to demonstrate the detector’s prowess.

“I knew the kind of data they’d get from the NSLS fluorescence detector would knock their socks off,” Woll said.

The Maia detector – based on a massively parallel detector array composed of 384 individual detectors, an “on-the-fly” scanning system, and advanced analysis software – imaged the entire painting in about eight hours, a job that would normally take about 30 days.

Maia produced high-definition maps of the spatial distribution of different chemical elements in the painting. From left to right: copper, iron, lead, mercury.

The copper mapping by Maia revealed contour lines of a beardless, seemingly younger male figure wearing a collar and beret, characteristic of Rembrandt’s early self-portraits. It appears that Rembrandt started a self-portrait, left the painting unfinished, and later painted over the earlier work.

“The copper revealed by x-ray fluorescence corresponds to the underpainting, the first monochrome layer that Rembrandt traditionally put down when creating a new work,” Dik said. Cross-sectional analysis later confirmed the presence of copper in the lower layer of paint.

A third image, verified by infrared photography, revealed possibly a sketch made from carbon of a figure wearing a turban with a feather. “One thing was clear after the images Maia produced – this was no student copy,” said Dik. “You can’t always judge a painting by its surface!”

Given access to the underlying layers through the high-tech imaging techniques of science, the team’s art historians were able to draw enough similarities with other Rembrandt works and studio techniques to conclude that this painting was indeed by the master himself. According to Dik, someone who is copying a painting – such as a student in Rembrandt’s studio – would not change anything; they would simply replicate the work. Reworking an original painting into another work is an example of experimental techniques used by Rembrandt. The buried paint is proof of that, he said.

Dik added, “When I brought the painting to NSLS with my assistant, Matthias Alfeld, I knew the Maia detector was fast and sensitive. But the images far exceeded my expectations. We were very, very impressed.”

Siddons said that the Maia detector was originally inspired by a custom-made integrated circuit designed by Brookhaven Lab’s Instrumentation Division for a different x-ray technique, extended x-ray absorption fine structure. Maia was developed during an eight-year collaboration with CSIRO. With their expertise in high-speed custom computers, CSIRO added a real-time computer, which performs a sophisticated algorithm to extract the elemental contributions from the raw data as they are acquired. The algorithm allows reliable separation of weak fluorescence peaks that would otherwise be buried by nearby strong peaks from abundant elements. (See http://nmp.csiro.au/dynamic.html) Because of its speed and precision, the Maia detector and its associated analysis techniques will enhance studies that use x-ray fluorescence in the biological, environmental, geological, and materials sciences for measuring trace element concentrations in everything from soil deposits to the microstructure of exotic energy materials — and works of art.

Siddons is funded by the Office of Basic Energy Sciences (BES) within the U.S. Department of Energy Office of Science. BES plays a critical role in supporting detector development for research in a range of scientific disciplines, including materials science, physics, chemistry, and medicine. New detectors are essential to sustaining innovative science in the U.S.

For additional background information and images, go to: http://webh01.ua.ac.be/mitac4/rembrandt/index_301111.html