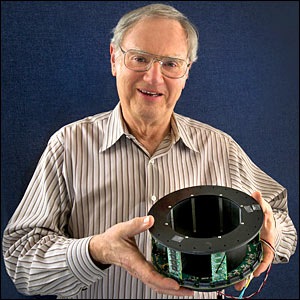 The goal of more accurate diagnoses, fewer unwanted biopsies, and better patient care is in sight. For years, researchers at Brookhaven Lab have been developing new scanners that combine PET and MRI imaging techniques. Now, this new multi-modality imaging — which provides both anatomical and functional information from one single scan — is proving to be an invaluable tool for research in areas ranging from cancer in humans to water transport in plants.

All are invited to attend this free talk, which is open to the public and will be held in Berkner Hall at 4 p.m. Refreshments will be offered before and after the lecture. Visitors to the Lab 16 and older must carry a photo ID while on site.

To join Schlyer for lunch at a restaurant off-site on the day following the talk, contact Amalia Ruggiero, Ext. 2837, alr@bnl.gov.

Schlyer earned a Ph.D. in chemistry from the University of California at San Diego in 1976. He arrived at Brookhaven Lab as a postdoc in the Chemistry Department that year, and between 1978 and 1981, he became an assistant chemist and then an associate chemist there. He continued his research at the Cyclotron Corporation in Berkeley, and at King Faisal Specialist Hospital in Saudi Arabia, where he became a department chairman. He returned to Brookhaven’s Chemistry Department in 1985. In 2000, he became an adjunct professor in the Biomedical Engineering Department at Stony Brook University, and he continues to teach there today. He earned tenure from Brookhaven’s Chemistry and Medical Departments in 2003, and was promoted to senior chemist with tenure in the Medical Department in 2007.

Schlyer holds eight patents, and is a member of both the Experts Section of the International Atomic Energy Agency and a committee for the International Union of Pure and Applied Chemistry. He is also a reviewer for the Journal of the Korean Nuclear Society, and editor of Current Radiopharmaceuticals.