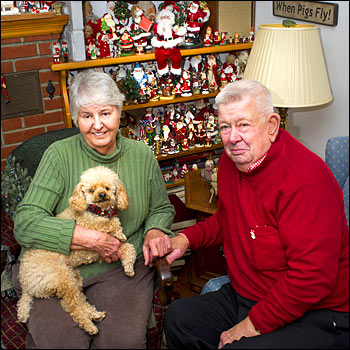 Those who remember Joan Depken, who retired from the Lab in 1997 as a much appreciated senior administrative secretary in the Alternating Gradient Synchrotron’s Experimental Planning & Support Division, will not be surprised to learn that she has a whole list of unexpected hobbies. In addition to her interest in history and work for the Rocky Point Historical Society, since retiring, she has completed many more of her exquisite “counted cross-stitch” pictures, trained and qualified at the Cornell Cooperative Extension as a master gardener, and, with her husband, Walter, has continued to add to their stunning collection of Santa Claus figurines.

“We started with a creche from each of our parents, with some very ancient Santas from Germany (Walter), and Wales (Joan), and an antique feather tree, and we went on from there,” said Joan. “At first we collected Santas from nearby, but later we joined the ‘Golden Glow of Christmas Past,’ organization to visit specialized stores in places like Lansing, Milwaukee, and Louisville. We met crazy collectors like ourselves and had a wonderful time.”

Each year, the Depkens spend about a week taking all the boxes of packed-away Santas down from the attic, and at least two weeks in arranging them in new displays. “We like to change several of our arrangements around each year, so we get a different view of the Santas,” said Joan. “But we keep some of our old favorites together, like the village from Erzebirge, Germany, that is traditionally crafted by slicing the wood to make houses, horses — everything — with a distinctive flat look, or the ‘thimble’ houses in my English Christmas village.”

Walter explained that feather trees started being made during a time on the plains of Germany when trees were scarce and geese were plentiful. “Some of these trees are quite sturdy and some are so delicate,” he said. “We’ve now got five, including one with ornaments covered in gold. One reason we like them is that they don’t drop needles!”

There’s one snag to having such a magnificent collection: putting them away. “First, you just want to sit and enjoy them. Later, you keep them up because you can’t bear the thought of the work of repacking and getting them back in the attic,” Joan said. “Then, you realize that early bulbs are shooting up, the Easter bunny is on his way, and you’d better get on with it!”