Tenure appointments are made after a rigorous selection procedure culminating in a comprehensive review of each tenure case by the Brookhaven Council, an elected body that advises the Director on matters of concern to the scientific staff. The BSA Science & Technology Steering Committee oversees the tenure process and makes final recommendations to the BSA board. The newly tenured scientists are featured in alphabetical order, or as photographs or articles become available. James Alessi and Hooman Davoudiasl were featured on January 26, Ralph James and Ping Liu, on January 27, and Jason Graetz and Qiang Li on February 6. The contributions of Chang-Jun Liu and Paul Sorensen are summarized below.

Biochemist Chang-Jun Liu was granted tenure for his original and creative research in the molecular characterization of the genes, enzymes and chemistry involved in plants’ phenylpropanoid metabolism. Phenylpropanoids, molecules derived from the protein-building amino acid phenylalanine, play an important role in processes like cell wall synthesis and lignin formation. This research is important in the development of sustainable fuels, a major BNL science initiative.

Liu’s interest in biosynthesis of plants’ secondary metabolites reaches back to his M.Sc. and Ph.D. thesis projects at the Shanghai Institute of Plant Physiology of the Chinese Academy of Sciences. Since coming to BNL in 2005, his interests have included the synthesis of plant cell walls and lignin and the production of (iso)flavonoids involved in plant defenses against pathogens. His basic research on plant natural products, cell wall synthesis and lignification is highly relevant to DOE's interest in the efficient conversion of plant biomass into biofuels and value-added chemicals.

“Chang-Jun has established a program of original research that is internationally known to be of outstanding quality,” said Creighton Wirick, Biology Department interim chair. “He has provided substantial and pioneering insights into the biology of enzymes important in bioenergy crops. He is particularly well qualified to tackle these difficult problems because of his ability to integrate bioinformatics, biochemical, structural biological and molecular genetic approaches, and his work leverages BNL's synchrotron light source facilities.”

In a recent major accomplishment, Liu engaged in deciphering the molecular mechanism for lignin precursors' transport and deposition and engineered an enzyme with lignin-altering capabilities that would facilitate biomass conversion into biofuels.

In addition, Liu has been an adjunct professor in Stony Brook University’s Department of Biochemistry and Cell Biology since 2005. 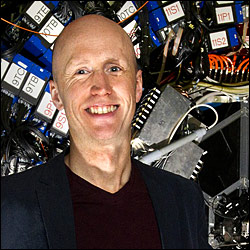 Physicist Paul Sorensen, Physics Department, was awarded tenure for outstanding research yielding some of the most powerful evidence that the matter produced by the Relativistic Heavy Ion Collider (RHIC) is quark gluon plasma, the liquid-like, flowing mix of elementary particles left in the Big Bang’s wake. For his important early measurements, Sorensen won the 2008 George E. Valley Jr. Prize of the American Physical Society. In 2009, he also received the Presidential Early Career Award for Scientists and Engineers.

“Paul is internationally recognized for scientific accomplishment of great significance for nuclear physics and the BNL RHIC program,” said Tom Ludlam, Physics chair. “He is seen in the Physics Department as a key figure in the Lab’s intellectual and technical leadership in this field.”

Sorensen received his Ph.D. from the University of California, Los Angeles, in 2003. He came to BNL in 2005 as a Goldhaber Fellow, joining the STAR detector group.

An expert in the use of heavy ion data to clarify bulk properties of quark gluon plasma and its expansion dynamics, Sorensen has been a leader of the Solenoidal Tracker at the RHIC STAR experiment’s analysis of the quark gluon plasma’s flow data.

Recently, Sorensen has focused on characterizing the plasma through fluctuations in the flow patterns observed in heavy ion collisions at RHIC. He recognized that the “lumpiness” of the collision’s initial geometry should be transmitted to fluctuations in the final-state flow patterns and into the correlation structure of the final-state particles. He is also among the leaders in developing studies of heavy ion collisions over a range of energies, which may reveal a predicted critical endpoint of quark gluon plasma’s phase boundary, of extreme interest to the nuclear physics community.