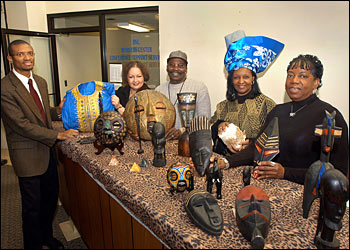 Part I of a video presentation of a NOVA program, The Forgotten Genius, on Percy Julian.

Through re-enactments, archival film, and personal interviews, NOVA created a program that describes the life of Percy Julian, acclaimed for discoveries in organic chemistry and as the first black director of an industrial chemistry research lab. Julian earned his masters from Harvard University even while black students were banned from the dorms in Harvard Yard, and his Ph.D. from the University of Vienna, where he studied under one of Vienna’s leading chemists, Ernst Spath. Julian’s later achievements included his work on converting soybeans into steroids on an industrial scale, and helping to make the drug cortizone affordable.

Part II of The Forgotten Genius.

The 2012 display by the club, now called the African American Affinity Club, will include art from Ghana, Tanzania, and Egypt, the art of the late Michael Newton, Long Islander, and silk screen work of Atlanta artist Daw’u.

Sekazi K. Mtingwa of the Massachusetts Institute of Technology will talk on “Celebrating the Lives of Two Bold Afro-Russians.”

Mtingwa will talk about two geniuses, Alexander Sergeyevich Pushkin (1799-1837) and his great-grandfather, Abram Petrovich Gannibal (1696?-1781), who contributed immensely to literature and civil engineering, respectively. He will explore their impact on the history and soul of Russia and assess the impact that Pushkin had directly on African-American literary figures during the Harlem Renaissance.