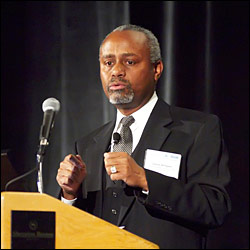 During his talk, Mtingwa will discuss the lives of two Afro-Russians, Alexander Sergeyevich Pushkin (1799-1837) and Pushkin’s great-grandfather Abram Petrovich Gannibal (1696?-1781). He will highlight their contributions to literature and civil engineering, respectively, and the history and soul of Russia. He will then assess Pushkin’s impact on African-American literary figures during the Harlem Renaissance, and explore how Gannibal could play a similar role for African Americans in the fields of science, technology, engineering, and math.

Mtingwa earned bachelors degrees in physics and mathematics at MIT in 1971 and a Ph.D. in theoretical high energy physics at Princeton University in 1976. Some of the positions he has held include serving as chair of the Physics Department at North Carolina A&T State University from 1991 until 1994. Starting in 2001, he served for two years as the Martin Luther King, Jr. Visiting Professor of Physics at MIT and then two years as a visiting professor of physics at Harvard University. He is currently a senior lecturer at MIT and a consultant for Brookhaven Lab.

Mtingwa has served on a number of committees, subcommittees, and councils, including the Nuclear Energy Research Advisory Committee for DOE, the African Laser Centre in South Africa, and the new African Institute of Mathematical Sciences in Ghana. He cofounded the National Society of Black Physicists and National Society of Hispanic Physicists, and is the vice-chair of the Interdisciplinary Consortium for Research and Educational Access in Science and Engineering (INCREASE). INCREASE, which has a memorandum of understanding in place with Brookhaven Lab, promotes research at Historically Black Colleges and Universities and other minority-serving institutions.