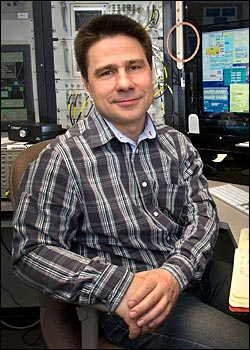 UPTON, NY - The Institute of Electrical and Electronics Engineers/Nuclear and Plasma Science Society has honored Brookhaven physicist Vitaly Yakimenko with the 2012 Particle Accelerator Science and Technology Award. IEEE, the world’s largest professional association dedicated to technology innovation, recognized Yakimenko for outstanding “contributions to high-brightness electron beams and their application to advanced accelerators and light sources.” He will receive the award at the 2012 International Particle Accelerator Conference on May 24 at the Morial Convention Center in New Orleans.

“I was surprised and excited to hear about this honor,” said Yakimenko, who became the director of Brookhaven’s Accelerator Test Facility (ATF) in 2005. “It’s wonderful to know that people are paying attention to the work we do at Brookhaven. I am thankful to my collaborators at the ATF and the large community of visiting scientists who helped drive these innovations in fundamental research.”

“Brookhaven is very diverse – there’s no time to get stuck on something when you’re surrounded by this constant flow of new ideas and results,” Yakimenko said. “I am always stimulated by the accomplishments of my colleagues and the opportunity to tackle multiple challenges at the same time.”

Yakimenko currently juggles around 15 ongoing projects, which he called the usual workload, ranging from experimental design to organizing the meetings for Brookhaven accelerator facility users.

Yakimenko earned his Ph.D. in physics from the Institute for Nuclear Physics in Novosibirsk, Russia. Before joining Brookhaven in 1996 as a research associate, he worked at the GSI heavy ion research center in Darmstadt, Germany and at the German Electron Synchrotron (DESY) in Hamburg.