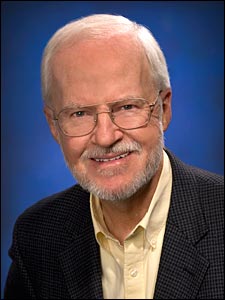 Anthony J. Baltz, former senior physicist in the Nuclear Theory Group and Deputy Theory Group leader of the RIKEN BNL Research Center, was named Senior Scientist Emeritus upon his retirement last month. In celebration of his 40 years at BNL, the Physics Department held “BaltzFest” on March 28, during which colleagues related their experiences with Baltz and presented a collection of scientific talks on topics closely related to Baltz’s research.

Among Baltz’s interesting earlier contributions is his role in the so-called “solar neutrino problem.” In the late 1960s, BNL chemist Ray Davis, Jr. used a chlorine-argon radiochemical detector to observe solar neutrinos, elementary particles produced in the nuclear reactions that power the sun. For this research he became a Nobel Prize winner in 2002. However, only one third of the expected neutrinos were detected, implying that either the missing neutrinos produced in the sun do not all reach Earth, or that neutrinos are not produced in the predicted intensity. In 1985, Soviet physicists Stanislav Mikheyev and Alexei Smirnov proposed the solution: electron neutrinos produced in the core of the sun, while passing out through the density of the sun, change form, or “oscillate” into another neutrino species not observable in Davis’s electron neutrino detector.

In collaboration with now retired BNL theorist Joseph Weneser, Baltz calculated the possible additional oscillation of the solar neutrinos while passing through the Earth’s matter, a phenomenon called the “day-night effect.” Baltz’s calculations of the day-night variations were included in the final version of the 1987 proposal for the Sudbury Neutrino Observatory (SNO) solar neutrino detector, which finally provided definitive results showing that solar electron neutrinos transform into other types of neutrino. The limit on detection of a day-night effect provided a constraint on the values of the neutrino oscillation solution.

Baltz first came to BNL in 1971 as a post-doctoral research associate. He investigated low energy heavy ion reactions, where heavy ions graze each other and transfer neutrons and protons.

In 1984, with Brookhaven’s Craig Thorn and Chellis Chasman, Baltz patented an improved magnet with pole tips specially designed to reduce fringe fields at the outer edge of produced fields. This invention is potentially useful in single turn beam extraction in the design of large isochronous cyclotrons, an accelerator that increases its magnetic field to compensate for relativistic increase of the accelerated ion’s mass.

Currently, Baltz studies the ultraperipheral collisions of relativistic heavy ions, or the collisions induced by the electromagnetic fields surrounding colliding heavy ions, at the RHIC and the Large Hadron Collider (LHC). In both colliders, the ions can pass each other without actual contact; their long-range fields still produce particles of interest. Through his emeritus position, Baltz says he plans to continue this research.

“I’ve been here for 40 years and I expect to keep somewhat active in physics after I retire. I really appreciate an emeritus position because it allows me to follow the areas of interest that I have, such as the ultraperipheral reaction results coming out of RHIC and the LHC,” said Baltz. “I am very honored to have received this distinction.”

For the ultraperipheral collisions that continue to intrigue him, Baltz has developed theory and models for better predictions of the rates for the fields to create electron-positron pairs, excite the ions to eject neutrons, and excite quark anti-quark pairs (mesons). The neutrons that are ejected from the ions can be detected in Zero Degree Calorimeters and compared with Baltz’s calculations. This allows beam luminosity, or rate of particle interactions, to be determined.

“I enjoy taking theory and being able to compute something where there’s data,” said Baltz, who commented that Brookhaven, too, has played an important part in the development of his research. “I think it is a really wonderful environment here,” explained Baltz. “There is always good physics going on and good people to collaborate and talk with, and the direction the Lab has gone has provided some interesting physics to think about.”

During his tenure at BNL, Baltz has had several visiting appointments, including at Lawrence Berkeley Laboratory, the Universidade de Sao Paolo’s Instituto de Fisica, and the University of Manchester’s Department of Theoretical Physics.

On two separate occasions, Baltz spent a year at DOE’s Division of Nuclear Physics headquarters in Germantown, Maryland, in charge of the Nuclear Theory program. Baltz enjoyed working in this capacity, he said, because he got to learn about the type of physics that was being done elsewhere and meet many fellow scientists.

To honor Anthony Baltz on his retirement after 40 years at BNL, as well as to celebrate his being named Senior Scientist Emeritus, his colleagues held “Baltzfest” on March 28, in the Physics Department Small Seminar Room. The symposium included scientific talks in areas closely related to Baltz’s research, and several lively reminiscences from his colleagues.

The afternoon began with a talk on “RIKEN BNL Research Center (RBRC): Past, Present and Future” by Nick Samios, the present director. In summarizing the 20-year role of RBRC in physics at the Relativistic Heavy Ion Collider (RHIC) and elsewhere, Samios thanked Baltz for his valuable contributions as deputy head of the Theory Group since RBRC’s inception. Peter Bond, special advisor to the BNL Director, who has known Baltz since their graduate student days at Case Western Reserve University, followed with memories of their time together at BNL.

Larry McLerran of BNL’s Nuclear Theory (NT) Group and the RBRC Theory Group leader, and Spencer Klein, Lawrence Berkeley National Laboratory, both spoke to Baltz’s significant contributions in the field of ultraperipheral heavy ion collisions. These works played a significant role in fostering experimental studies at RHIC and the Large Hadron Collider at CERN, Switzerland, in this direction. An amusing side-note — in hindsight — mentioned by more than one speaker was that early concerns the RHIC beams may be unstable due to electron capture were allayed in 1998 by computations confirming otherwise by Baltz with BNL’s Mark Rhoades-Brown and Joe Weneser. Baltz’s work on matter effects in solar neutrino mixing was addressed by Josh Klein, University of Pennsylvania, who provided a broad overview of solar neutrino physics highlighting the many contributions of scientists at BNL. The final speaker was Baltz’s longtime BNL colleague John Millener, who gave a summary of past and current studies in hypernuclear physics.