Eight school districts participated in the program when it started in 2006, but it has grown to encompass about 2500 students from 30 Suffolk County schools. OSSP fosters respect for open spaces and helps students to learn about the scientific process through working with real-life data in the field. Also, the program fosters an interest in science and technology that may inspire students to seek careers in those fields. Some of the participating students gave oral presentations, and others displayed posters on their research. The projects ranged from water quality testing and songbird inventories to an analysis of dragonfly wings using the National Synchroton Light Source. 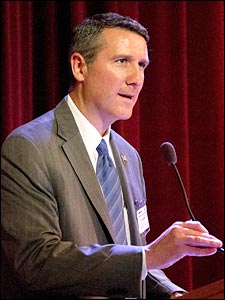 At the ceremony that concluded the program, Lesko said he was “incredibly impressed with the level of detail and the level of work that went into these projects, and also with the program as a whole.” He said that fostering student interest in science and technology is important “because it affects our everyday life and the places we live.”

As a example, he cited the stark difference in the Town of Brookhaven between the Carmans River, which he described as “one of the most pristine and one of the healthiest rivers you ever want to see,” and the Forge River, just a couple of miles away, which he called “dead – there’s nothing growing there.”

Lesko said this illustrates “what can happen if we don’t protect our rivers and other natural habitats.” He attributed the Forge River’s decline to overbuilding of houses too close to the river, as well as to the duck farms in the area. Unlike the Forge, two-thirds of the Carmans River flows through protected areas.

Brookhaven Lab maintains a website on which research results are posted, and land stewards who work with the students and teachers have access to the data to help them preserve and protect their property. The Laboratory prepares teachers for the program by hosting workshops in the summer. For more information about OSSP, contact the program coordinator Mel Morris at mmorris@bnl.gov.