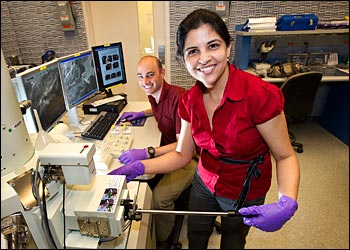 Simer Gill and colleague Avishai Ofan at the CFN

Following last year’s earthquake and tsunami at Japan’s Fukushima nuclear power plants, many nuclear scientists have been focused on developing models to predict what will happen under a variety of conditions that may exist at similar facilities around the world. Brookhaven Lab, with its long history of nuclear research combined with its facilities for synchrotron imaging and nanoscience, may be uniquely positioned to contribute to solutions to some of the problems and challenges that affect the safety and efficiency of our existing nuclear power plants, and allow us to more reliably predict their future performance.

Simerjeet Gill is a researcher in the Advanced Materials for Energy Systems Group in the Nuclear Science and Technology Department. The Group’s mission is to conduct research on materials in extreme environments for advanced energy systems such as nuclear power plants. Gill has been using the National Synchrotron Light Source (NSLS) and the Center for Functional Nanomaterials (CFN) to study radiation damage-tolerant nanocomposites, which may hold the key to solving problems of cracking, swelling and embrittlement in nuclear materials. Gill has attended several meetings and workshops focused on these issues, presenting her work at a meeting of TMS, the Minerals, Metals and Materials Society, in Orlando in March. Along with her colleague John Valente, she also attended the 2012 Nanonuclear Workshop on Nuclear Fuels and Materials Nanotechnology R&D at the Smalley Institute at Rice University in Houston. In June, she traveled to Gaithersburg MD to attend Nanonuclear 2012, at which she was part of a discussion group to make nanonuclear program funding recommendations to the Department of Energy’s Office of Nuclear Energy.

Gill said the main purpose of the workshop at the Smalley Institute was for experts from nanomaterials science and experts from nuclear science to meet on a common ground. At the three-day conference, nuclear and materials scientists like Gill described their main challenges and issues to the nanomaterials experts, explaining what materials science problems they hope to solve. These include materials degradation by corrosion, cracking and swelling, and ultimately materials failure caused by radiation damage. The nanomaterials experts gave presentations on newly developed technologies, and finally, participants were divided into groups for in-depth discussions of specific areas such as mechanical properties, chemical properties and modeling.

“Materials degradation is a common problem in existing nuclear reactors and can lead to increased maintenance, downtime and risk,” Gill said. “Knowledge of the long-term behavior of materials in the reactor core, vessels and other subsystems is critical for safe and reliable reactor operation.”

When materials are irradiated, defects are created that when aggregated together cause material failure phenomena like embrittlement, cracking and swelling. Advances in nanomaterials science may be used to solve materials degradation problems in the nuclear community, because nanomaterials have very high surface areas and can be designed to have very high interface content, allowing them to absorb radiation damage and leave a “healed” material. At the CFN, Gill has been studying copper niobium nanomaterials known to have self-healing properties that were bombarded with helium radiation and further with krypton and annealed at high temperatures to test their resistance to radiation under extreme environments. She has used the Center for Energy and Environmental Studies at Argonne National Lab to investigate radiation damage in real time.

“There are two basic approaches we can use,” Gill said. “We can design a nanomaterial in such a way that there are a lot of boundaries that can absorb these defects and make materials radiation-resistant. The second way nanomaterials can play a role is to use nanoscale manufacturing processes and nanoscale materials that are known to perform better in nuclear applications.”

For example: nanoporous materials such as metal-organic frameworks are being tested for their potential to absorb fission gases such as Xenon. Gill will be studying advanced nanomaterials such as nano-structured coatings of specific materials — amorphous iron, aluminum, titanium and combinations of those — that have increased radiation resistance in high-temperature environments compared to steel used in the current generation of reactors.

Gill said that Brookhaven scientists have a unique advantage with their easy access to the NSLS to study these materials issues. In conjunction with the CFN, the NSLS provides researchers with state-of-the-art capabilities to probe the unique properties of matter at the nanoscale

“I think that is our unique strength,” she said. “That is what someone at BNL can really contribute to this field.”

Gill pointed out that understanding how to make radiation-tolerant materials is an area of basic science that can have many applications, in addition to helping keep our nuclear power plants running safely.

“We need to resolve these materials issues to make sure our existing nuclear reactors run safely, but all the expertise we have gathered on the nanoscale will hopefully be used to benefit many other areas of science, not just nuclear,” she said.

Brookhaven plans to host a future nanonuclear conference focused on chemical properties and separations. The target date for the conference is November 2012.