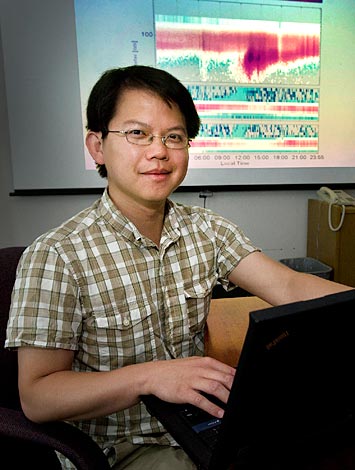 The American Association of Aerosol Research (AAAR) has awarded Chongai Kuang, a Brookhaven Lab environmental scientist, the 2012 Sheldon K. Friedlander Award in recognition of his doctoral dissertation on the formation of aerosol particles in the atmosphere. Kuang’s 2009 thesis, titled “Atmospheric Nucleation: Measurements, Mechanisms, and Dynamics,” was chosen for its combination of “elegant, theoretical descriptions of key processes with much needed observational constraints,” according to the AAAR award description, which also cites Kuang as one of the most accomplished and talented aerosol scientists in the world.

“Receiving this award gives me a tremendous sense of gratification,” said Kuang. “To be quite honest, my thesis is kind of on the short side. So it’s nice that the award committee has recognized quality over quantity,” he added.

Kuang’s dissertation focused on particle formation that occurs due to both natural and man-made emissions into the atmosphere—including contributions from sources such as organic bacteria and pollen as well as emissions released from the burning of fossil fuels. “My thesis was to study experimentally and theoretically how these particles are formed, develop models that predict how they’re formed, and also develop instrumentation to measure these particles being formed,” Kuang said. “So it was a real opportunity to do a comprehensive study of this process.”

The field of aerosol science focuses not only on particle formation, but also on how these particles affect atmospheric conditions for clouds, and the ripple effect that can have on regional climates. Despite being commonly understood as the spray from an aerosol spray can, aerosols are any and all suspensions of solid and liquid particles in a gas, meaning everything from dust, sea salt, and allergens to car exhaust, cigarette smoke, and pesticides. So the field also closely studies how this range of natural aerosols interact with those man-made ones, providing a detailed understanding of the effect aerosols can have on human health and global climate trends.

Within the Department of Energy (DOE), the models that scientists like Kuang develop are aimed at providing a better understanding of the environment for both scientists and policy makers who are tasked with developing strategies to mitigate the effects humans have on the environment with regard to aerosols.

Kuang came to Brookhaven Lab in the fall of 2009 to complete his postdoctoral research a week after finishing his thesis at the University of Minnesota. Before that, Kuang studied at the University of California, Berkeley, where he majored in chemical engineering with a minor in nanoparticle science and technology.

In 2009, Kuang’s Ph.D. advisor brought him to a DOE meeting where he was introduced to members of Brookhaven Lab’s environmental science group. “I was really impressed with the work that was being done here and the scientific staff that they had,” he said on his decision to apply to Brookhaven after the completion of his dissertation.

“It was a good fit coming here because in this division they want to study the life cycle of aerosols—how they are formed, the various transformations they undergo, and then how eventually they are removed from the atmosphere,” Kuang said.

Most recently, Kuang collaborated on a paper published October 22, 2012, in the Proceedings of the National Academy of Sciences, which took an untraditional approach and formulated a new model for particle formation. The model was created entirely using experimental data instead of computation and theoretical work. “This new model—basically an acid-based reaction model for the formation of new particles—kind of breaks from the traditional view of how these particles are formed,” Kuang said.

Looking ahead, Kuang is excited to bring his expertise in aerosol science to different regions of the world, where collaboration with other scientists can yield new understanding about the inner workings of Earth’s atmosphere. “I’m looking forward to a collaboration in Finland, where I’ll be building some new instrumentation and working with scientists there to study particle formation in that environment,” he said.

Further down the line, Kuang is aiming to explore and capitalize on the opportunities Brookhaven offers for multidisciplinary collaboration. He hopes to combine his expertise in nanoparticle detection with that of the members of the Center for Functional Nanomaterials, as well as use the National Synchrotron Light Source—and its much larger and more capable successor NSLS-II—to further his study of particle formation and its impacts on the environment.