The Department of Energy ARM Climate Research Facility website recently featured this update on the MAGIC climate study, which began taking data in October 2012 from instruments mounted aboard a Horizon Lines ship as it routinely traverses a route from Los Angeles to Hawaii. The instruments have been offloaded for the ship's maintenance period, and will return to service —; and sampling —; when the ship resumes its route in late April. Brookhaven Lab's Ernie Lewis serves as principal investigator for the study. For more details about Brookhaven's role, see http://www.bnl.gov/newsroom/news.php?a=11455, or contact Karen McNulty Walsh, kmcnulty@bnl.gov, 631 344-8350.

A Homecoming Party at the Los Angeles Shipping Dock

Early this January, curious workers at the Los Angeles shipping dock watched as engineers using cranes unloaded radars and other equally fragile scientific instruments from a cargo ship, at times without even looking at how they were carrying out the operation.

"It is a strange dance," laughs Nicki Hickmon, acknowledging but at the same time brushing aside any concerns one may have regarding impending catastrophes. "Our team works hard to secure everything, and with some luck and skilled contractors, we've avoided instrument mishaps," assures Hickmon, the cheerful manager overseeing the operation on the dock that morning.

Hickmon is a meteorologist at Argonne National Laboratory just outside Chicago; she has had a career managing high-stress situations in a range of fields, including medical emergencies, before moving into meteorological user facilities in Oklahoma. She rose through the ranks and now oversees the maintenance, assembly, and deployment of one of two mobile climate observatories for the U. S. Department of Energy's Atmospheric Radiation Measurement (ARM) Climate Research Facility.

Known as the second ARM Mobile Facility, or AMF2, the instrument suite that Hickmon oversees is maintained by the Argonne National Laboratory, but travels around the globe to gather critical climate and weather-related data.

MAGIC Act on the High Seas

When the Horizon Lines cargo ship, the Horizon Spirit, docked that morning, onboard was the AMF2 instrument suite, the seaworthy climate observatory, which after about three months (i.e., a total of eight round trips) had just completed its maiden sea voyage. 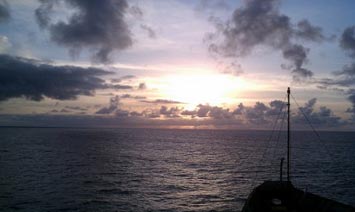 Sunset from the bow: During eight round trips between Los Angeles, California, and Honolulu, Hawaii, AMF2 on board the Spirit (bow seen here) has obtained continuous onboard measurements of several weather and climate-related variables.

MAGIC, or the Marine ARM GPCI Investigation of Clouds, left port in October 2012 with a mission to collect data over a long period, which would help scientists to understand why large voluminous stratocumulus clouds, which typically hug the California coastline, give way to puffy cotton-like billowing cumulus clouds with flat bases near Hawaii.
"The transition [from one cloud type to another] reflects a fundamental change in the structure of the boundary layer," said Jim Mather, a scientist at Pacific Northwest National Laboratory and the technical director of the ARM Facility. The boundary layer is the lowest level of the atmosphere in contact with the Earth and is responsible for most weather events. How this layer affects cloud formation is not well understood and is an active field of climate research.

MAGIC is largely a meteorological operation, although the instruments measure a range of climate-related parameters.

"In many ways MAGIC is all about water," wrote Ernie Lewis, the lead scientist for the MAGIC campaign, in his MAGIC Updates blog. Lewis is an atmospheric scientist at Brookhaven National Laboratory in Upton, New York. "Most of the measurements are water-related," added Lewis.

The AMF2 instrument suite—;radars, weather balloons (launched every 3-6 hours), infrared thermometers ("these are the ones that tell the temperature by merely looking at an object," wrote Lewis in his maritime blog), among others—;gathered cloud, weather, ocean, and even aerosol data, not just once or even periodically, but continuously as the cargo ship went about its business between Los Angeles and Honolulu. ARM engineers have successfully operated almost all of the AMF2 instruments from solid ground, but never from a moving ship.

"It required downsizing the larger of these instruments—;for example, the radars—;to fit in the narrow deck space available on the Spirit," said Hickmon, pointing to the elaborate but swift planning and coordination from the Argonne team that went into the AMF2's first extended maritime adventure. Hickmon acknowledged, however, that the ocean is a difficult situation; the biggest challenge lay in the very nature of the operation—;how to successfully gather accurate data from a moving ship. 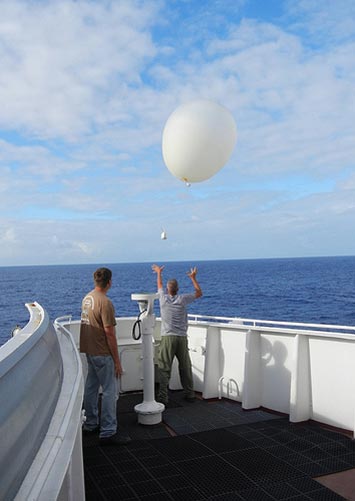 AMF2 technicians release a weather balloon under optimal conditions from the Spirit.

"As the ship moves it pitches, rolls, heaves, and surges," said Mathew Macduff, a data engineer at Pacific Northwest National Laboratory. Macduff, who is also the technical leader of the ARM Data Integration team, was referring to the various motions of a ship—;the same ones that cause seasickness in some people.
To correct for the movements, "measurements had to be made at very high resolution," said Macduff. High resolution equals more detail, resulting in very large data sets. This makes it even more difficult to acquire, store, and transmit the large volumes of data off the ship and back to ARM's data processing headquarters at Oak Ridge National Laboratory in Tennessee, some in real-time, others over a period of weeks.

Erratic winds, sometimes at speeds exceeding 45 miles per hour, posed another major challenge, particularly to launching weather balloons. "Having seen the conditions under which [weather balloon] launches occur, I think this is fantastic," wrote Lewis regarding the successful launch rate from one of the ship's first trips. The balloons travel up to a height of 15 miles, much higher than where clouds start forming (within a mile of the earth's surface) before bursting. Close to 80 percent of the weather balloons launched in this first phase of the campaign were successful.

After the Spirit finally docked in Los Angeles, Hickmon and her team unloaded the AMF2 instruments, packed them in vans, and headed off to a nearby trucking lot.

"Some [of the instruments] are in the vans, and some are safely packed away in a warehouse for the next few months," said Hickmon. "But the data system [of AMF2] will continue to transmit stored data back to the labs," she added, fully aware that the activity sounded a bit strange.

"This is the nature of every AMF2 operation," assures Adam Theisen, an analyst at the ARM Data Quality Office at the University of Oklahoma. Theisen and his teammates review measurement data from all of the AMF2 operations.

Once the measurement data go through the wringer, the ARM Data Archive at Oak Ridge National Laboratory makes the information available to climate scientists across the world who are interested in maritime weather over the heavily navigated segment of the eastern Pacific.

If all of this sounds like an efficient assembly line, that's because it is. "We don't need to talk sometimes—;we just know the drill. As I said, it is a strange dance," smiled Hickmon.